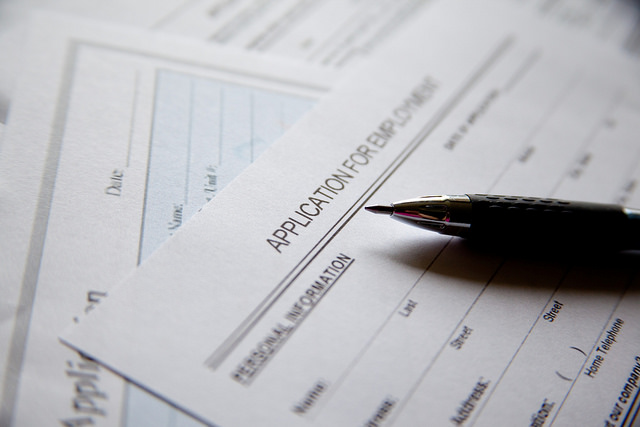 Anyone who has ever applied for a job has noticed the part on the application where you have to notify whether or not you have been convicted of a felony or have gone to prison. Did you know that this seemingly innocuous question is a tool used for job discrimination, even if the disclaimer says checking off 'yes' will not bar you from employment?

It's another sign of how broken our justice system is. Rather than reforming the incarcerated, our society ostracizes them; from a for profit prison system that relies on the incarceration of nonviolent offenders, to the fact that many formerly incarcerated are unable to find work, or become underemployed. Not to mention the countless forms of abuse the incarcerated are likely to face while in the prison industrial complex including solitary confinement, sexual abuse, and shackled birth for those who entered prison while pregnant (all considered human rights abuses).

Sarah Lazare's article for Common Dreams brings up one small victory. Obama has told some federal employers to remove the incarceration/felony question from their application forms. This does not apply to federal contract jobs, or employment in general, but it's a small victory that can help those formerly incarcerated to get back on their feet.

Last year Rochester 'banned the box', have you noticed any changes? For any of our readers who were formerly incarcerated, has it helped you in any way? Do you work with someone who was helped by this law? Please share your stories in the comments.

Following years of organizing by formerly-incarcerated people and their families, President Barack Obama announced Monday that, henceforth, he will instruct some federal employers to "ban the box"—or delay inquiries into a job applicant's incarceration history to curb discrimination and stigma.

The proclamation was embraced by rights campaigners as a meaningful step towards eroding system-wide prejudice against the formerly incarcerated, but short of the deep change that is needed.

Obama announced the initiative, as well as a number of other small actions to promote "reintegration for the formerly incarcerated," at an address delivered late Monday afternoon in Newark, New Jersey.

According to a fact sheet from the White House, Obama is directing the Office of Personnel Management "to take action where it can by modifying its rules to delay inquiries into criminal history until later in the hiring process." The president says the reform "will better ensure that applicants from all segments of society, including those with prior criminal histories, receive a fair opportunity to compete for Federal employment."

The order, however, falls short of removing incarceration history from the application process altogether. What's more, the mandate will only apply to federal employers, but not to contractors.

"Of course, we would like to see a lot more, but we are grateful Obama has taken this first step. We hope that he will take a next step and issue an executive order relating to contractors," said manuel la fontaine, an organizer with All of Us or None, a federation of formerly incarcerated and convicted people and their families.

In a statement released Monday, the American Civil Liberties Union echoed la fontaine's concern about the exclusion of federal contractors.

la fontaine emphasized that impacted communities have led the campaign to ban the box for over a decade, so far winning numerous victories on the local and state levels. Across the country, 19 states, and over 100 cities and counties, have moved to ban the box—a reference to the box on job applications that people with incarceration histories are required to check—according to the National Employment Law Project.

Just last week, a coalition of organizations including All of Us or None, Legal Services for Prisoners with Children, and Southern Coalition for Social Justice, rallied in front of the White House and delivered a petition with 130,000 signatures calling for the president to ban the box for all federal employers, including contractors.

"The box on job applications is just one of many things that serve to marginalize people coming out of prison and prevent them from having access to services and resources and opportunities," Mohamed Shehk, communications director for Critical Resistance, toldCommon Dreams.

Eighty-seven percent of employers across the United States conduct background checks,according to the calculations of the Sentencing Project. Over 60 percent of formerly incarcerated people are unemployed a year after their release, and those who do get jobs make 40 percent less pay a year.

The resultant poverty that formerly incarcerated people face extends to their families and communities, who are already saddled with the high costs associated with having a family member locked up—from phone to legal fees. A report released in September by the Ella Baker Center for Human Rights, Forward Together, and Research Action Design found that nearly two-thirds of family members surveyed "had difficulty meeting basic needs as a result of a loved one's conviction and incarceration."

The family cost burden disproportionately falls on black women, who are far more likelythan their white counterparts to have a family member who is incarcerated.

Campaigners say that the president's announcement constitutes a small but meaningful step forward. "This is a collective victory in our community," said la fontaine. "The take-home message is we brought this from our own community. It was no politician or missionary or ally. We are hungry for change so that our families can feed ourselves and house ourselves and clothe ourselves."

The president's announcement comes amid growing concern over mass incarceration in the United States, which is the biggest jailer in the world, home to as many as 100 million people with criminal records. This system disproportionately targets people of color: black men are six times as likely, and Latino/Hispanic men 2.5 times as likely, as their white counterparts to be incarcerated.

The American Friends Service Committee on Monday launched an online tool to assist efforts to divest from the prison industry by identifying corporations "directly complicit in ongoing severe violations of human rights and international law."