How Runaway Economic Inequality and Racism are Linked to Police Killings 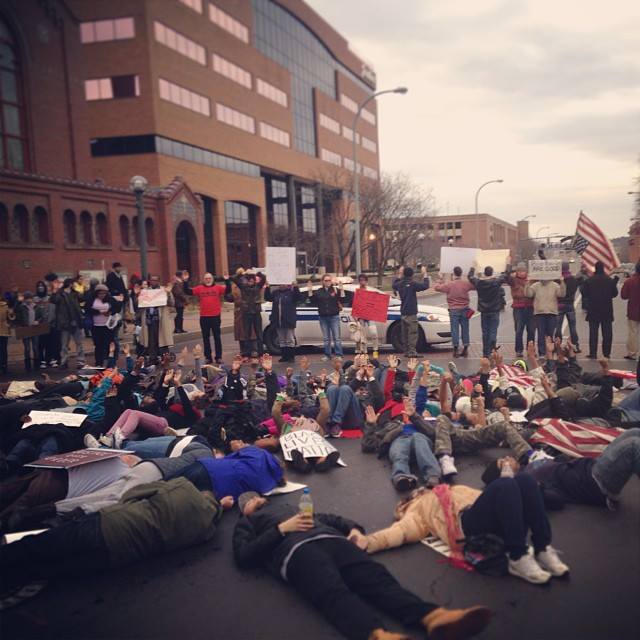 Causes intersect, where one disadvantaged group is pained, another is also pained. This has been emphasized in many of the recent protests against police brutality. While the root of police killings is racial, economic injustice is cited as an endemic problem that affects people in poverty regardless of race. From a racial perspective, racial injustice makes people more vulnerable to economic injustice. People like Michael Brown, Eric Garner, and Tamir Rice lived in poor neighborhoods where employment was low, income for those who were employed was low, and greater society didn't bat an eye.

Les Leopold's article for Alternet is an in-depth look at the economic injustice issues that perpetuate racism. His main focus is the criminal justice system in relation to poverty, poor neighborhoods vs. gentrified, high unemployment, a growing prison industrial complex, and Wall Street greed. Combined with our country's dismal racial history and we see just how broken our system is.

One issue I wish was included in this article was education. Education in itself is a large issue, but some factors tie in with economic issues. Graduation rates and poor funding for public schools, especially in urban areas, play a factor that lead to young people turning to underground employment. The rise in publicly funded charter schools also plays a factor in the dwindling budgets of public education.  A major part of what factors in projected prison populations is how black students are faring in our public education system. When you look at poor quality schools and low graduation rates for black youth, it seems the cards are stacked against them early on. (photo credit: Rochester die-in on intersection of Clinton and Court St.)

On one level the story is simple: racism. Too many police officers fear people of color in the neighborhoods they patrol, and are likely to over-react with force during encounters. The local courts also engage in discrimination by failing to indict the killers, even when captured on video, as in the brutal police slaying of Eric Garner in Staten Island, NY. Both the policing and the court system obviously reflect the polarization of our communities, and our inability to escape the legacy of slavery, more than 150 years after emancipation.

But racism only accounts for part of the story. We also must understand how judicial racism and even police violence are deeply connected to the financialization of the economy and runaway inequality.

It is not by accident that America has become both the most unequal developed nation in the world, and the nation with the largest prison population. We're number one in police killings, incarceration and inequality—not Russia, not China. Our national self-image so steeped in the idea of freedom has not caught up with these ugly realities.

Racism is has been with us for centuries, but something very new happened in America around 1980 that set the stage for these police killings. Something very big is transforming us into the first democratic police state in human history.

Please look carefully at the chart below, and consider the history of American racism, violence and protest. 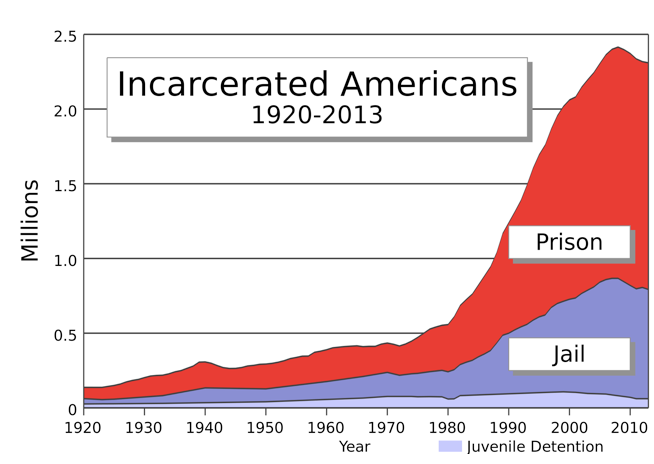 From 1920 to around 1980, the American prison population held steady, even as our population grew rapidly. One could easily argue that racism was much more virulent during this period, especially in the Jim Crow South, from the hundreds of lynchings in the 1920s to violent repression of civil rights activists in the 1950s and '60s. So unless you believe that racism changed for the worse since 1980, then it alone can not possibly account for the explosive rise of the prison population.

Then something major changed to send the prison population soaring. What happened?

The explosive rise of the American prison population

Most explanations focus on complexities of the shift to mandatory sentencing. Judges were compelled by harsh new sentencing laws to jail even those convicted of minor crimes, and to hand out sentences much longer than appropriate to the infraction. Because of urban housing segregation by race and income, lower income neighborhoods experienced higher crime rates, made even higher by the futile enforcement of drug prohibition. As the police enforcement increased, a disproportionate number of people of color were funneled into prison. Although non-Hispanic blacks form only 13.6 of the U.S. population, they are 39.4 percent of the prison population. The prison population further swelled with bigger backlogs in under-funded courts, bail that cannot be met, and inadequate legal services for the poor.

But the gargantuan climb in our prison population also corresponds with the dramatic rise in inequality. (The chart below compares the incomes of the top 1 percent with the bottom 90%. Note how the gap rises virtually in lockstep with the rise in our prison population.) This uncanny correspondence suggests that we must consider other explanations that explore the links between runaway inequality and runaway incarceration.

America adopted draconian conservative economic policies starting in the late 1970s with the advent of the Better Business Climate model. The idea was to cut taxes on the rich and deregulate business, especially Wall Street. That combination was supposed to put money in the hands of the few, who would then heavily invest it in our economy, thereby creating an enormous economic boom. Good jobs and rising incomes for all those willing to work would soon follow. It didn't happen. Instead these Better Business Climate policies led to runaway inequality, the destruction of middle-income jobs, and wage-stagnation for the vast majority of working people.

As Wall Street broke free of its New Deal constraints, a new wave of corporate raiders, private equity firms and hedge funds bought up companies with borrowed money and the proceeded to financially strip mine their wealth...and ours as well. As Professor Bill Lazonick points out, this changed the corporate culture of large firms from "retain and reinvest" to "downsize and distribute." The goal of nearly every company soon became the extraction of as much wealth as possible in behalf of investors, banks and CEOs. Instead of investing in employees so they would stay and grow with the company, the workforce was downsized, plants shipped overseas, full-time workers replaced with temps, and unions busted. (Contrary to most media accounts, it is not mandated by law that boards of directors maximize short term corporate profits.)

Americans of color who had only recently found their way into the better paying industrial jobs in the 1950s and 1960s, suffered enormous job losses and were forced to find work in the low paying jobs, often in the service sector. Urban decay accelerated as inner city incomes declined and industrial tax revenues plummeted.

To make ends meet a new generation of workers found work in the underground economy —some of it legal, some not. Drug dealing, like rum running in the 1920s, became an alternative path toward the American Dream.

Urban areas became a microcosm for the interplay between runaway inequality and runaway incarceration. As lower-income areas deteriorated, cities like New York, Chicago, San Francisco and Los Angeles also became magnets for the wealthy. Marginal neighborhoods were transformed by developers who bought and fixed up apartment buildings with an eye to squeezing out low-income tenants. Often, the first new wave of occupiers were young professionals and artists, many of whom were the children of the well-to-do.

At the same time, the "broken windows" theory of police enforcement took hold. It argued that by cracking down on minor offenses, like graffiti drawing and drinking booze on the street, a sense of law and order would develop in the neighborhood, which in turn would reduce the occurrence of more serious crimes.

It was a short jump from efforts to stop quality of life crimes, to "stop and frisk." In short order, the police became a true occupying force that could accost just about anyone for anything, and even use lethal force to keep the native population in check. Unprovoked police checks were so prevalent that the residents referred to the charge as "driving while black."

Take the case of Eric Garner who was selling individual cigarettes (tobacco, not joints) near the Staten Island Ferry terminal, where those lucky enough to find jobs in Manhattan commute to and fro. Garner's only crime was trying to scratch out a living in the underground economy. But to the police, he was committing a lifestyle crime that according to the broken windows theory should be addressed to prevent more serious crimes. So the police arrested a man, who in any humane and sane society should never have been confronted, let alone apprehended. (They try to justify this madness with the ludicrous claim the arrest was because he wasn't paying the cigarette tax.) He was killed while trying to earn a subsistence living, if that, in the epicenter of runaway inequality.

Eric Garner is just one of the 22.2 million surplus workers who now struggle to make ends meet in our financialized economy. (The number comes from the careful review of unemployment data compiled each month by Leo Hindery, and sent via email to journalists and policy analysts.) Garner was selling cigarettes on the street, because he had very few viable alternatives.

Clearly, the free-market solution promised by the Better Business Climate model is a cruel joke. It has not produced enough jobs, and most of the ones it has produced are low-paying service jobs.

During the New Deal and the Great Society, the answer was government job creation programs, free educational opportunities and massive investment in refurbishing our infrastructure.

But those days ended with runaway inequality. Large corporations and the rich simply are unwilling to foot the bill and have the political power to make sure they don't. Not only were taxes cut on the rich, but also with the avid assistance of Wall Street, large corporations and the rich found numerous ways to park their money off-shore, far away from the reach of the IRS. At the same time these tax evaders call for austerity programs. They want cuts in social programs to counter budget deficits, which were created in large part because of tax evasion by the well-to-do.

This leaves only one other option for how to deal with our massive surplus workforce: incarceration. Better to put the surplus population in jail, than to launch new government job programs. Better to arrest a man for selling individual cigarettes, than to fund programs to create good jobs. Better to have more privatized prisons, than more tax-payer funded schools. (In 2011, for the first time Wisconsin spent more on its prisons than on its fabled university system.)

A new direction for protest

The vibrant public response to these police killings is heartening. We are taking to the streets, and rightly so. But where are our protests heading? What should we demand that adequately addresses this destruction of life and hope?

Yes, fairer courts, better policing, drug decriminalization, and the end of mandatory sentencing would be an excellent start. But that's not nearly enough. We need a vision that empties our prisons, and rebuilds our economy from the bottom up. To get there from here runs through Wall Street. High finance is the driver of runaway inequality. We have to end its iron grip on our lives or nothing much will change, especially for those at the bottom of the income ladder. A mass movement for economic justice is badly needed, one that calls for public banks, free higher education, free healthcare, caps on CEO incomes, and steeply progressive income taxes.

A movement that targets inequality and Wall Street is by definition multiracial. It can bring us together. And we must come together in order to stand the slightest chance of success.