In Political System Disconnected From Society's Ills, Remedies Pushed to the Fringes of Public Debate 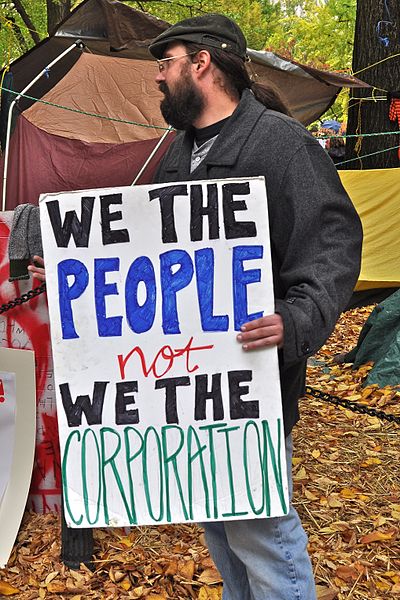 Citizens are angry. We are angry about the destruction of our environment, stagnant wages, bottom-line-profit driven employers, continued systematic oppression including racism, denial of services for women's health, rape culture, and the list goes on. Movements from Occupy to Ferguson are met with authorities attempting to silence their voices through violation of the First Amendment right to peaceful assembly. Politicians when met with these issues, either beat around the bush or place full blame on those speaking out.

Where are our lawmakers? Many of them are deadlocked in party vs. party posturing. They're either obstructing something, or arguing theory without practical application. The few who do take time to address the public have things to say like, "If you didn't want a minimum wage job, you should have aspired for better!". The rest, the ones who could make change, are too chicken to speak in favor of their constituents, or potential constituents.

Robert Kuttner's article for The American Prospect explores this disconnect between government and citizens. Back in the not-so-good "good old days", movements were eventually listened to. Things aren't perfect, but change happened in leaps and bounds. In those years, America had long term prosperity and progress. Social movements, even when initially met with opposition, broke ground for progress. Civil rights led to the end of open racial discrimination, labor movements led to unions, suffrage led to women getting the right to vote.

What will this disconnect mean for those running for office this year? What will it mean for voters? How can we be sure that the people we vote into office this November are proactive in being the voice of their constituents?

For half a century beginning with Franklin Roosevelt, there was a direct connection between the problems that afflicted American society and the remedies on offer from our democratic system.

High unemployment? The New Deal, the World War II mobilization, and the postwar boom took care of that.

The exclusion of blacks from the American dream? A mass movement and a revolution in civil rights law made a big down-payment on redeeming the promise of Lincoln.

Women as second-class citizens? We're a long way from full gender equality, but the civil rights laws dating to the 1960s, including Title IX, and the women's movement cracked a lot of glass ceilings. Today, the gender divide among new graduates entering the elite professions is close to 50/50, and the pattern of the girls excelling in grade school only to fall behind the boys because of limited opportunities and sex-based tracking is a thing of the past.

I could go on, but you get the point. In the last century, democratic politics addressed real problems. The solutions were far from complete, but there was real progress.

Now take a look at today's social and economic problems. There is a chasm between the ills and what the political system is even willing to debate. What's being offered are pathetic tokens—or the claim that we should just leave everything to the genius of the free market (that brought us the financial collapse and the climate calamity.)

Wages have been stagnant for a generation. Corporations are on a tear, turning stable payroll employment into casual labor. Unions are being pummeled. Republicans in Congress have blocked even a modest increase in the federal minimum wage, and a few bold cities like Seattle with its new $15 minimum wage are outliers.

We face a catastrophe of global climate change, as well as several trillion dollars in deferred investment in decaying public infrastructure. A serious effort at a green transition combined with modernization of public systems would cost something like 5 percent of GDP per year—maybe $750 billion. No mainstream politician is even talking about this for fear of being ridiculed. (We spent six times that relative to GDP in the mobilization to win World War II.)

Too many politicians of both parties would rather talk about deficit reduction. Jesus wept!

Young adults face diminishing horizons, sandbagged with student debt and vanishing steady jobs. You have to go to the edges of mainstream politics to find leaders willing to propose a return to debt-free higher education.

Mothers, as well as fathers, have been in the paid workforce for two generations now. But the systems of the society and the workplace still operate is if it were 1954 instead of 2014. A few brave politicians like New York Mayor Bill DeBlasio are willing to take real risks to get one year of public pre-kindergarten education.

It's because our political system has disconnected from the society's ills. Every remedy that would actually make a major difference, like the serious remedies of the 20th century, is at the far fringes of public debate.

If we are to fix what's broken in this society, if we are to restore the promise of democracy—we need to bridge this chasm between the ills and what the political system has on offer.

How will that happen? The usual way—uncommon leadership connected to energized mass movements. Leaders and movements need to embrace solutions that seem impossibly radical, just as equal rights for women and for African Americans once did.

But the chasm between real problems and solutions on offer has never been wider.