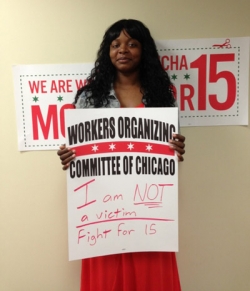 The Fight for $15 has always said $15 and union rights for a reason. We know that raising wages will solve many problems in working people's lives, but that it won't solve all of them. To have a genuinely positive workplace where basic dignity is respected means to have a union.

As we fight alongside fast food workers demanding a union across the country, we've come upon many problems faced in the fast-food industry. One of those problems is sexual harrassment. In an industry full of povery wages and exploitative conditions, we're not surprised to add to the list of problems faced by workers simply for trying to make a living while working for some of the most profitable companies in the world.