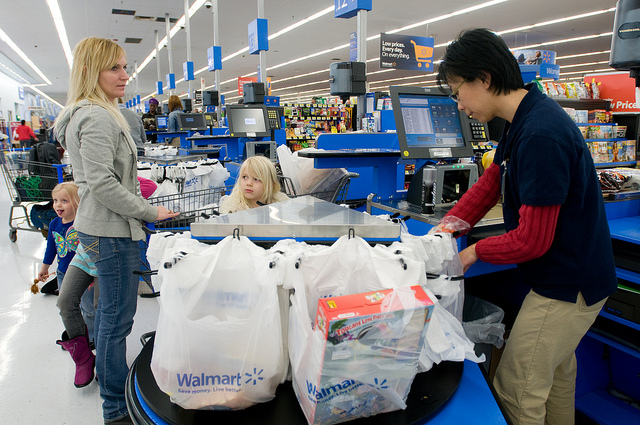 Walmart is the King of bad jobs. I first learned of how awful Walmart can be through reading Barbara Ehrenreich's book Nickel and Dimed: on (Not) Getting by in America, where Ehrenreich goes undercover working a number of poverty-wage jobs and shares her experience of being overworked and underpaid. I remember being appalled at how Walmart treated its workers, the very people who bring in the Walton family's fortune by keeping their stores running. Without workers, a business is nothing.

Richard L Trumka's article for The Guardian illustrates how despite Walmart's recent PR campaign touting it as a company that is "actively addressing" worker (and public) concerns, little has changed. In some cases things have gotten worse, and Walmart still retaliates when workers take action. Successful unionizing leads to store or department closures. Unsuccessful unionizing leads to people simply being fired. Let me reiterate, this is a company that would rather close stores than have a unionized workforce. For a smaller company that kind of action would be suicide.

Walmart has been under fire for years for everything from employment practices to its shortchanging of suppliers. Current changes they've made are not enough, and workers have no need to feel "grateful" for a raise when their wages still keep them in poverty. Walmart needs to know that their pithy appeasements mean nothing to still-oppressed workers. Their attitudes and worker treatment are outdated, and if they want to remain successful they need to get with the times and actually be the kinder, gentler company they're claiming to be. No PR campaign can protect horrible companies from scrutiny.

Americans are increasingly fed up with an economy that rewards wealth over work, a message that’s made it all the way to the top. That’s why when the White House hosts a Summit on Worker Voice on Wednesday to highlight the power of working people standing together to demand better jobs and better lives, one notable corporation has been excluded – Walmart.

Walmart is the embodiment of our broken economic system. The company pays poverty wages, has discriminated against women and minorities, harms our environment, wreaks havoc on the global supply chain and continues to lead a race to the bottom where workers are treated like numbers on a balance sheet instead of human beings with families to sustain. Walmart’s motto: “Save Money. Live Better” seems only to apply to its heirs, who have amassed more wealth than 42% of the poorest American families combined.

For nearly two generations, no company has been worse than Walmart when it comes to suppressing the rights of workers to stand together on the job. As evidence of this misconduct became overwhelming and public criticism about its labor practices grew, Walmart reacted as one would expect: with weak gestures and a robust, expensive public relations campaign.

Throughout 2015, Walmart has tried to position itself as a softer, gentler company more responsive to the workers that make it go. Earlier this year, Walmart announced a pay bump for associates. Walmart even ran a television ad touting the raises with an employee standing in front of checkout stand number 15 – a not-so-subtle reference to the efforts of working people to raise the country’s minimum wage to $15 an hour.

No amount of subliminal advertising or corporate spin can change the fact that the new wage rates are nowhere near $15 and the lowest paid workers at Walmart will still be forced to live in poverty. Around the same time, Walmart also boastedabout a change in scheduling practices that in reality did little to address workers’ inflexible, inadequate and inconsistent hours. In fact, many Walmart workers have reported having their hours cut in the months following this announcement.

But this has not stopped thousands of Walmart associates from speaking out and demanding more. Walmart workers have helped spark a national conversation about income inequality through their courageous actions on Black Friday and throughout the year. The workers at Walmart’s Pico Rivera, California, store were some of the most active supporters in this campaign – including holding a historic sit-down strike in late 2014.

Suddenly, in April, Walmart decided to close five stores due to “plumbing issues” and laid off thousands of workers, including over 500 employed at the Pico Rivera store. Prior to the closures, workers did not report any problems with the stores’ plumbing systems. The company has not transferred most of the activists to other stores, nor have they promised to rehire all the laid off workers. Something stinks here, and it has nothing to do with plumbing.

Those who know Walmart’s track record cannot be surprised. The Pico Rivera debacle is the latest in a long line of incidents to silence the voices of workers. In 2000, when meat cutters at a Jacksonville, Texas, store voted to join the United Food and Commercial Workers Union (UFCW), Walmart discontinued its meat-cutting operations. When workers at a Quebec Walmart cast their ballots in 2004 for the UFCW, Walmart shut down that store altogether before a collective bargaining agreement could be reached. And during the most recent activism of Walmart workers, some of the most vocal leaders have been fired from their jobs.

The Walmart model – low wages and the suppression of workers’ rights – is a relic of the past. Today working people are coming together through collective action, and many employers are starting to listen. There is momentum for a high-road, high-wage economy that gives workers a fair process to make their voices heard.Walmart should get with the times.