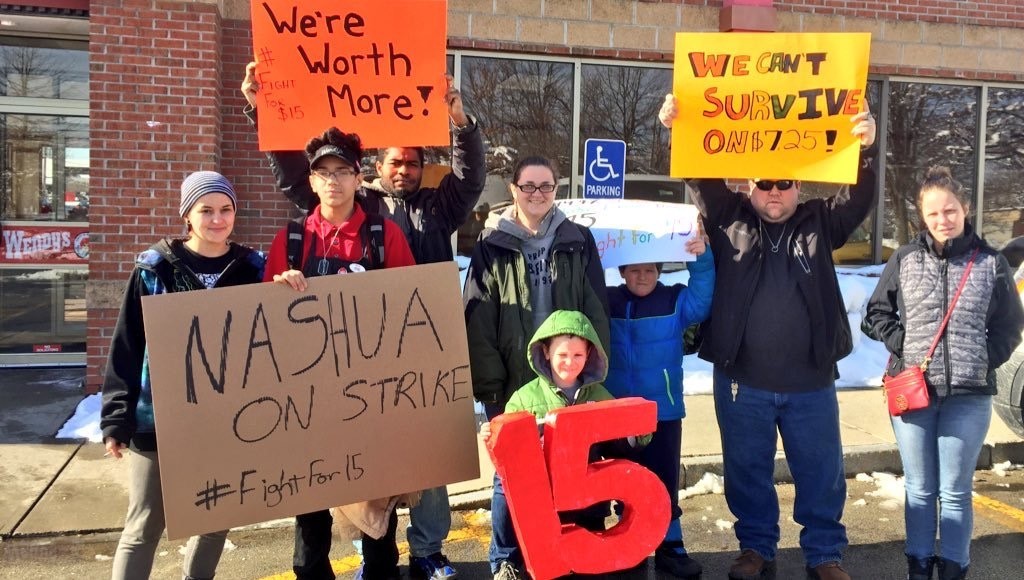 In the past this blog has shared articles discussing how Fight for $15 and Black Lives Matter intersect, and here is another sad example. Jeffery Pendleton made only $100 a week at the Burger King in Nashua, NH. He never told anyone he was homeless, and was known by friends and colleagues for being vocally active in local Fight for $15 efforts. After an arrest for marijuana possession, one he didn't have the $100 in bail for, he died in jail under mysterious circumstances. He was also one of the only black residents in a predominantly white community.

This story intersects with various economic justice causes, illustrating how interconnected everything truly is. It tragically illustrates how race and economics also play into homelessness, the war on drugs, criminal justice, and punishment for being poor. In response, co workers of Pendleton, and activists have come together to protest the Department of Corrections and call for answers. The autopsy performed by the DOC showed no signs of harm, but an independent second autopsy has.

Lets not have deaths like Pendleton's be in vain, and call justice for Jeffery Pendleton and others like him. He was a human being who deserved dignity, respect, and opportunity to live a better life.

(Photo credit: Fight for $15, Pendleton is third from left)

Jeffery Pendleton was only 26 when he was found dead in a jail cell in Manchester’s Valley Street detention facility earlier this month. The Arkansas native had been working at a Burger King in Nashua, New Hampshire, earning something like $100 a week and sleeping on the streets because he couldn’t afford housing.

An official autopsy found no signs of trauma or clear cause of death, leaving Pendleton’s family in Arkansas and friends in the Fight for $15 workers’ movement confused, angry, and suspicious.

A group of workers from the area and police watchdogs from elsewhere in New England are set to march Friday on a Department of Corrections headquarters in New Hampshire to demand answers.

A GoFundMe page raising money for Pendleton’s family to cover burial costs says they commissioned a second examination of his body. That second autopsy indicates he “was harmed prior to his death and likely that harmed caused his death,” according to the burial fundraising page. The family were not available for interviews.

“Jeffery, unfortunately, never let his family know about his money problems. We were unaware,” the page says. “He simply let us know he was fine and living in New Hampshire. He worked at Burger King. But the truth was that he was homeless and had to struggle. It’s heartbreaking to know he kept this from us.” Pendleton’s inability to obtain housing seems to have put him on the radar of the local police in Nashua and elsewhere nearby.

Andy Fontaine, 19, worked with Pendleton for several months at the Nashua Burger King. When the fast food worker strikes that have swept the nation in the past three years hit New Hampshire, Fontaine and Pendleton walked the picket line together. But the older man never told Fontaine about his living situation either.

“He never mentioned it,” Fontaine told ThinkProgress. “At Burger King, you talk about your personal life and it’s a joke to them. So we all just joke around and wait for the day to end.”

Fontaine is joining Friday’s protest, along with others from the store and from the broader Nashua community. Activists from Boston-based Mass Action Against Police Brutality are set to join the march as well. Organizers have not reached out directly to people involved in the Black Lives Matter movement about the 2:30 p.m. march, a spokesperson said.

The story hits on the factors driving the two most energetic and effective ground-level movements for societal progress in America today: Suspicious deaths of black people at the hands of police, and corporate policy toward frontline employees that deprives hard-working people of economic security.

And because Pendleton would have been free to go if he could have produced $100 cash to make bail, Friday’s protests may also tap into the growing movement to curb exploitative local policies that create a separate legal system for low-income people.

Pendleton’s kitchen job at Burger King likely furnished him just $100 a week to live on, Fontaine estimated. A Manchester native who’s lived in Nashua for over five years, Fontaine said he’s seen some indication that police there treat him differently from how they respond to people of color.

“I’ve had white friends arrested for the same exact charges as him, and their bail was $40, they got out and had some community service,” Fontaine said. “I don’t know why they felt the need to send him to Valley Street of all places. Valley Street is a very violent place.”

The jail is notorious locally, and Hillsborough County paid out roughly $1 million between 2008 and 2013 to settle numerous lawsuits over abuses and conditions there.

Pendleton’s crime was possession of a small amount of marijuana. But his true offense may have been challenging the local criminal justice system.

Pendleton was well known to the Nashua police. He had won a $10,315 settlement from the lily-white town’s security forces in 2015 after suing the department for imprisoning him for 33 days for walking in a park near the town library. In a separate case, the nearby town of Hudson gave him a $7,640 settlement after ticketing him for panhandling. American Civil Liberties Union lawyers aided Pendleton in each case, according to the Manchester Union Leader.

When he died, Pendleton was only in a jail cell because he did not have $100 to pay bail for the marijuana charge. Such cash-bail systems have become popular around the country in recent years, drawing intense scrutiny to policies the effectively criminalize poverty.

Just days before corrections officers found Pendleton’s body, the U.S. Department of Justice issued a stern warning to communities that jail people for being poor. The agency also announced $2.5 million in grants for programs aimed at fixing bail systems so that people like Pendleton are no longer kept imprisoned because of their wallets rather than their conduct.

The federal pressure to reform abusive bail practices comes after several years of concerted effortby civil liberties lawyers around the country. Attorneys have fought to curb local and state court practices that violate constitutional protections by effectively reviving the debtors’ prisons that America abolished in the early 19th century.

That work has started getting much wider attention in recent years as high-profile police brutality cases threw a spotlight on the pattern of financially exploitative criminal justice work in low-income communities of color. Black Lives Matter activists have helped bring sustained pressure brought against all corners of the American criminal justice system in recent years. Online and ground-level activists’ successes in making abusive and racist policing practices headline news has helped bring such conversations out of courtrooms and into living rooms.

Friday’s march for Pendleton in New Hampshire has the potential to illustrate how the concerns animating Black Lives Matter connect with the other major populist movement in the American left today. The Fight for $15 strikes campaign by low-wage workers in the fast food and retail sectors has invigorated economic justice fights on roughly the same timeline that BLM made police racism and violence un-ignorable.

Participating in that organizing work brought Pendleton, the 26-year-old homeless black man from rural Arkansas, together with Fontaine, the white teenager helping support his family while dreaming of a career as a carpenter.

“He had just started maybe a month or two before the [February] strike,” Fontaine said. “We would joke around, talk about how Burger King treats us, talk about the strike and how to get more people.”

Even though the two weren’t especially close, Fontaine the experience of solidarity through the strike work makes it important to show support for the effort to get clarity about how he died.

“I think you should do what’s right, not just what benefits you. The Fight for 15, we’re doing it not just for us but for those who can’t fight, for the people who are afraid to go against their manager and maybe lose their job,” Fontaine said.

“Other than the fact he was a coworker and a friend, I mean, it was also unfair for them to do that to him. Even if it wasn’t him, if it was somebody I never knew. He was part of the Fight for $15, he was part of the Burger King community.”

Marchers will target the Hillsborough County Department of Corrections building in Manchester.

David Dionne, the county DOC’s superintendent, has said Pendleton was known and well-liked by DOC staff. “There appeared no indication that Mr. Pendleton was in any form of distress,” Dionne told the Union Leader. He also said Pendleton had been entrusted with odd jobs around the jail during a previous stint two years earlier.