The Fire this Time: America's Withdrawal from the Fight Against Racism Guarantees More Fergusons 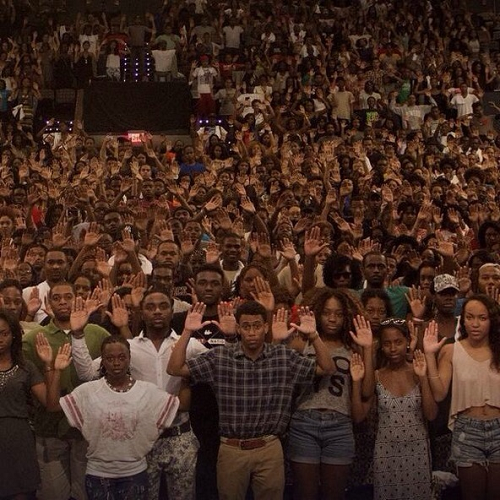 It has been one month since police officer Darren Wilson killed Michael Brown, and the people of Ferguson are still waiting for something to be done about it. What happened in Ferguson is a glaring example of what's happening everywhere in America, including our own back yard. Our "post-racial" society, is still very much racist, and still very much brutal to black people. Being black is still treated as an automatic mark of guilt, even with such progresses as equal-opportunity and our first black President.

Our own Police Department has come under scrutiny for racial profiling, brutality, and intimidating protest presence in recent years. Most famous recent example is the attack of Brenda Hardaway, who was pregnant at the time of her arrest. There was also the arrest of three teens last November, their crime? Waiting for the bus. Fortunately charges were dropped after the story made national headlines. A quick search of police brutality in Western NY brings up other incidents and scathing criticism against police departments.

Police brutality is just a slice of how racism manifests in today's America, as shown in Bob Herbert's article posted both in Policy Shop and The American Prospect. Other things like the recent change to the Voting Rights Act, poverty in minority neighborhoods, and the majority of critical comments about President Obama that either include, or just come short of using racial slurs show a country that is still deeply racist.

How should we address modern day racism? What can we do to hold police forces more accountable for their actions to assure they serve and protect all citizens? How can we make sure that even if an arrest is warranted, that unwarranted force is taken out of the process? Some communities have drafted laws enforcing officers to wear cameras at all time as a means to monitor their behavior, is that an appropriate route? Read the article and share your thoughts in the comments.

I remember the stunned reaction of so many Americans back in the summer of 2005 when legions of poor black people in desperate circumstances seemed to have suddenly and inexplicably materialized in New Orleans during the flooding that followed Hurricane Katrina.

Expressions of disbelief poured in from around the nation: “How can this be happening?” “I had no idea conditions were that bad.” “My God, is this America?”

People found themselves staring at the kind of poverty they thought had been largely wiped out decades earlier. President George W. Bush seemed as astonished as anyone. He made an eerie, oddly-lit, outdoor appearance in the city’s French Quarter on the evening of September 15 to announce that his administration would wage an all-out fight against the economic distress that continued to plague so many African Americans.

If you had listened to his announcement on the radio, you might have thought you were hearing the ghost of Lyndon Johnson. Poverty in America, said Bush, “has roots in a history of racial discrimination which cut off generations from the opportunity of America.” He added, “We have a duty to confront this poverty with bold action.”
Anyone who took Bush’s pledge seriously would have ended up disappointed because nothing of the sort happened. The poor black people of New Orleans faded back into the invisibility from which they had come.

It was ever thus: Some tragic development occurs; the media spotlight homes in on black people who had previously been invisible; instant experts weigh in with their pompous, uninformed analyses; and commitments as empty as deflated balloons are made. This time it’s Ferguson, Missouri, in the spotlight. And you can bet the mortgage that this time will be no different.

The precipitating events that cause these periodic national spasms can vary widely—the flooding of New Orleans, the assassination of the Rev. Dr. Martin Luther King, Jr., the beating of Rodney King. But these tragedies all emerge from the same fetid source—the racism embedded in the very foundation of America.

And it’s that racism—stark, in-your-face, never-ending, frequently murderous—that has so many African Americans so angry and frustrated, so furious, so enraged. Black people all across America, not just in Ferguson, are angry about the killing of Michael Brown. And they remain angry over the killing of Trayvon Martin. And many are seething over the fatal chokehold clamped on the throat of Eric Garner by a cop on Staten Island in New York—a cop who refused to relent even as Garner gasped, “I can’t breathe, I can’t breathe.”

They are angry about all those things, but they are also angry and frustrated about so much more. Here are just a few of the complaints. Black people are angry about voter suppression, the relentless, organized, years-long effort to prevent African Americans from freely exercising their fundamental right to cast a ballot for the candidates of their choice. That effort was bolstered immeasurably and given a veneer of legitimacy last year by the Supreme Court’s vile and destructive evisceration of the Voting Rights Act.

Blacks are angry and bitterly frustrated over the way so many were targeted and victimized by predators in the housing and finance industries, and the disproportionate suffering that African Americans endured in the subsequent housing meltdown and the recession. And they are angry about being left so far behind in the so-called economic recovery.

Blacks hold a variety of views about the job that Barack Obama has done as president. Most are very supportive; some have been disappointed. But nearly all are furious at the high levels of racism and personal venom that have characterized so much of the opposition not just to the president’s policies but to him personally. Most blacks I know have taken that as an affront to themselves, as well as an appalling affront to the president, and the resentment they feel is off the charts.

And, yes, there is profound anger and resentment at the myriad hateful ways that blacks are treated throughout the criminal justice system. I will never forget traveling to Avon Park, Florida, a few years ago to cover the case of an African American girl in kindergarten who was arrested by the police, handcuffed and taken to the police station in the back seat of a patrol car because she had thrown a tantrum in the classroom. When I interviewed the police chief, I expressed amazement that this had happened to a six-year-old. His reply came in an instant: “Do you think this is the first six-year-old we’ve arrested?”

These are just a very few of the many deep concerns harbored by black Americans. (Others include the chronic under-funding and wholesale closing of public schools in black neighborhoods; the continued widespread discrimination in employment and housing; and the humiliating, debilitating racist encounters, large and small, that nearly all black people face at one time or another, and that many blacks face on a daily basis.)

Despite all the rhetoric, the deepest concerns of blacks are seldom acted upon in any sustained, effective way. Most of the time, they are not even taken seriously. So the anger and the resentment intensifies, month after month, year after year, like gases in pressurized containers, until at some point they blow. That’s what has happened in Ferguson. And the trouble in Ferguson is likely to continue, off and on, indefinitely. Because the likelihood of a successful prosecution of the cop who killed Michael Brown is very slim.

The idea that America had reached some level of post-racism with the election of Barack Obama was always delusionary. But it was true that great strides had been made in the half-century or so that followed the civil rights movement. Now, because of the persistence of racism and a relaxation of the fight against it, we are moving backwards. Ferguson is just the latest illustration.

There is no reason to believe that government officials at the federal, state or local level will take the critical steps necessary to begin turning these tragic and explosive matters around. Government officials have a horror of honestly engaging anything that has to do with race. I can’t imagine the required leadership coming from any place other than the black community itself.

What is needed right now is a national gathering of some of the brightest and most committed African American men and women to begin devising strategies to fight back in a coherent and sustained way against the racial injustice that still permeates this society. Let that be the first step toward the development of a new cadre of black leadership to carry this fight forward.

In the absence of such leadership, it will be extremely difficult to avoid new outbreaks of the kind of violence and incoherence that we’ve seen in Ferguson. And there is always a danger of such outbreaks spiraling into something much worse, something completely out of control. I remember Newark and Detroit in 1967, and the devastation that followed the death of Dr. King, and Los Angeles in 1992, and on and on.

Those tragedies did not occur in a vacuum and it’s important to understand that. History tells us that it won’t be long before another Michael Brown, or Eric Garner, or Trayvon Martin is thrust upon us. The emergence of effective black leadership to guide us over the long haul is America’s only defense against such outrages, and against what James Baldwin so accurately characterized as the fire next time.