This Restaurant Pays A $15 Hourly Wage With Health Insurance, A Retirement Plan, and Paid Leave 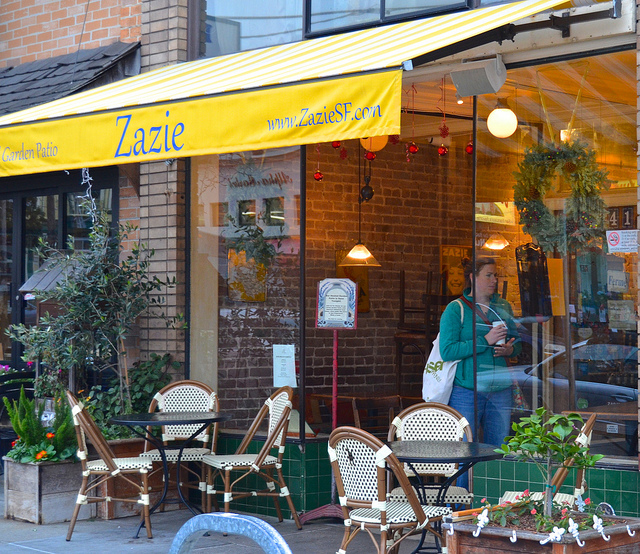 Happy employees are the key to a successful business, especially one that relies on serving the public. Jen Piallat, owner of Zazie in San Francisco knows this as all of her employees make a minimum of $15 an hour with benefits. Her workers are overjoyed, and have found that they are able to perform their jobs better without worries over industry standards like tipping. Instead they can solely focus on providing quality service to their customers.

Bryce Covert's article for Think Progress gives us the scoop on what led to Piallat's decision to raise wages, abolish tips, and offer full benefits. While prices have gone up, and some customers may leave, there are many who would likely be delighted by the more streamlined service thanks to waitstaff having more time to focus on them. One perk of ending tips is that time is saved by not having to manually enter them in credit card transactions!

The movement to end tipping in favor of paying livable wages is still small, and primarily focused on high-end restaurants. In the future it will hopefully become a greater reality for all restaurant workers, as federal minimum wage for waitstaff is only a measly $2.13 an hour. Not all customers will tip the customary 15-20%, which can mean lost wages not only in lack of tips, but taxes being taken out for the standard amount regardless of if the money is there or not. If you served a table, you will be taxed for the tips at that table as if they were 15-20%, regardless of what you actually receive.

The fight for $15 has focused on fast food which already has a "No tips allowed" system, but it will help workers across the board. As seen in this article, it can help the restaurant industry as a whole if servers are paid a livable hourly. Please continue supporting this crucial movement.

Jen Piallat, the owner of Zazie in San Francisco, knows what it’s like to work in the American restaurant industry. “I worked on the restaurant floor for 30 years before I owned my own,” she said. “I didn’t have savings or health insurance until I was 35.”

The story is very different for her employees today. She had already offered them 401(k) plans with a match, fully funded health and dental insurance, and paid sick leave. And now she’s gone even further, getting rid of tips in favor of increasing pay and offering even more benefits.

At the beginning of the month, the restaurant increased its prices across the board by about 20 percent. She noted some restaurants that have done away with tips have added a mandatory service charge at the bottom of the check instead. “I didn’t want to do that,” she said. “I like the all-inclusive model…of everything, not just service, not just a tip, it’s also full benefits.”

Her servers’ wages, which were already about $15 an hour, will now raise by 2 to 3 percent. But those who work in the “back of the house” in the kitchen or busing tables will get at least a 30 percent increase. Servers will also get a share of profits, receiving 11 percent of their individual sales every day on top of their wages.

And while she offered paid family leave on an informal basis, she said she’s now added it officially to the books. “We have basically full benefits,” she said.

She anticipates the changes will make a big difference for her employees. “Housing is so expensive here,” she noted. Housing costs in San Francisco are up 6 percent over the last year and have risen in some neighborhoods by 50 percent over the last decade. Three years ago, she says, all of her staff lived in San Francisco proper, but now at least a third live outside the city. She also noted that most restaurant workers have no savings, just as she didn’t before opening her own up. But she says that combined, her employees have over $1 million in their 401(k) plans.

Her employees are enthusiastic about the changes. “One of my servers who had been reticent about it said, ‘Can I hug you, I feel great about it,'” she said. After the first day without tips, servers realized that they had more time freed up because they didn’t have to keep track of credit card slips and enter their tips into the computer system. And they’re able to treat customers better as well. One served a table of people with French accents, notorious for low tips given that tipping isn’t customary in Europe, but didn’t feel the pressure to serve other tables better because she might get a better tip. “She said it’s so nice to be totally welcoming and friendly to them and not have to have any concern,” Palliat said.

There is a chance she’ll end up losing money in the new system. “I’m five percent concerned,” she said. She’ll also have to pay more in taxes because what servers used to make in tips, which doesn’t get reported, will now be reported income. But she says it’s still worth it. “I don’t have a problem making a little less to even things out, make it a little more equitable,” she said. Plus the restaurant might benefit from slightly less business: she noted that there’s a consistent two-hour wait on weekends, which she’d like to bring down and might achieve it through people being turned off by higher prices.

She’s going to keep a close eye on profits. But, she said, “I’m definitely not going to ever decrease [the staff’s] percentage… If in six months our profit level has bottomed out, we’ll just have to increase prices.”

By doing away with tips in favor of a living wage, Palliat joins a movement of sorts. It began in high-end restaurants in New York and on the West Coast, but now has spread to lower tier restaurants in Philadelphia, Kentucky, Pittsburgh, St. Paul, Minnesota, and Washington, D.C. While Americans think that our system is a way to reward good service, research has found that in reality tips vary little based on a customer’s experience. Instead, they tend to change more basedon appearance and race.

Being compensated through tips can also mean financial hardship for a lot of servers. It means they can be paid a lower minimum wage — the federal tipped minimum wage is just $2.13 an hour. While restaurant owners are supposed to make up the difference if tips don’t bring pay up to at least $7.25 an hour, many don’t. So people who work for tips end up twice as likely to live in poverty.