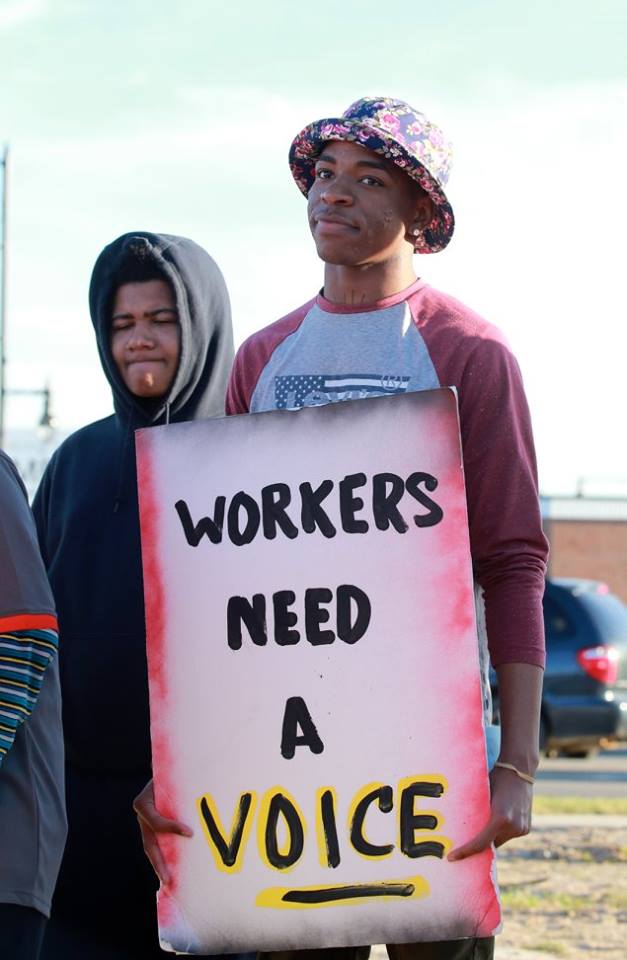 Many working adults work minimum-wage fast food jobs, because they have little choice. This includes people of all education levels, as well as people who in the past have owned successful businesses that fell victim to 2008's recession. Below is one story, shared by John D'Amanda from Common Dreams, originally published on Talk Poverty.org.

John's story is a common one. He owns a small business that fell on hard times. With the loss of income, he lost his apartment, his car, and eventually found work at McDonald's.  A lot of people working these jobs are a lot like John. They're outside the stereotype of the high school or college student working for spending money. Many of them are people who in the past had successful careers that were cut down by budget cuts and customer losses.

It's for people like John that we fight to bring a $15 minimum wage and union to New York State. Nobody should have to worry about whether or not they can make rent or pay all their bills. Everyone should have the right to access needed medical care, which also promotes a healthy workforce. Everyone should be able to have food security.

Please, help us in the fight to bring a $15 minimum wage to New York. Recognize that circumstances play a factor in people's options.

(Photo: Metro Justice Facebook from the International Day of Action)

My name is John D’Amanda, and I have been a loyal employee at a McDonald’s in Oakland, California for five years. Prior to working in fast food, I was a small business owner like millions of Americans. I made good money washing windows for houses, stores, malls, and contractors in the San Francisco/Alameda/Contra Costa counties area. But when the economy tanked, my business went with it as people tightened their belts and stopped hiring window washers. I lost many customers, struggled to pay my bills, and was eventually evicted from my apartment. I even lost the car that enabled me to travel to my jobs and couldn’t afford to buy another car. I came close to being out on the street.

I continued to work throughout my struggles. Like many others in the new economy, I went from owning my own business to a low-wage, part-time job in the fast food industry. And, even though I found work at McDonald’s, my wages were not enough to rent an apartment of my own, pay medical bills, or buy a car. Fast forward five years and I still experience unpredictable hours, and I am rarely scheduled for even 25 hours a week.

In light of my financial situation, I have cut back on living costs as much as possible. I rent a shared room in a house where I also share a bathroom and kitchen with 7 other people. Although taking the train to work would be much faster, I save money by commuting on the bus. In the evenings, it can take as much as 2 hours to get home. I’ve proactively applied for food stamps, but due to my work schedule and commute time, it has been impossible for me to attend the required in-person meetings.

In America, we’re told that if we work hard, we can make it. If we cut back and save and scrimp, we will succeed. I have done these things and I’m still struggling. And so, I’m looking for answers. I ask the people making the policies in Washington, D.C. and California – how did our economy become so broken? What else would have you me do to survive?

Things have improved for me somewhat — my city passed a $12.25 per hour minimum wage, and the raise, which just went into effect, helps me keep up with my bills. Maybe I will be able to save up enough to buy a car so that I can start up my window washing business again. But, with this raise, I have to choose between saving for my business and covering basic living costs such as dental care. I am one disaster away from losing everything.

For example, last month, I went to the emergency room with severe tooth pain. The doctor pulled 7 teeth in one sitting. Now I need dentures that I can’t afford to pay for. My friends and family back home in Florida are going to pass the hat to help me out. But that’s not the way it should be. This isn’t how we fix our broken economy and provide opportunity to people.

We need to fight for $15 an hour. I can speak for myself when I say that, if I made $15 per hour, things would totally change. I could buy a car, afford regular dental care, and maybe even be married and have a house. I could save to reestablish my business and get back on my feet. When Americans work hard, we deserve to be paid enough to support ourselves and our families. That’s why I continue to fight.