What Does it Mean to be Anti-Police? 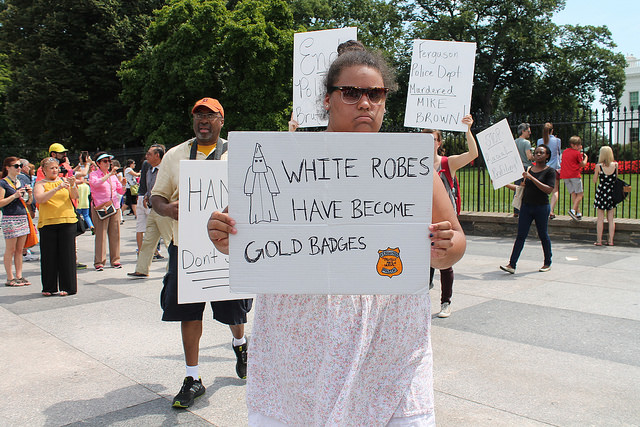 As Voltaire said, "To learn who rules over you, simply find out who you are not allowed to criticize." Who are we currently not allowed to criticize? The police of course! Questioning their policies, practices, and the recent lack of indictments for officers who have killed unarmed black citizens is considered anti-police. Here's the thing though, criticizing a corrupt institution does not equate to being against an institution. It just means there's room for improvement.

Alex S. Vitale's article for The Nation illustrates this exact point. You're not anti-park if you want a swing set repaired. You're not anti-retail either if you think a mega chain should pay its employees better, same goes for restaurants. Vitale's suggestions are ones that would help police departments improve relations with the public, and make police presence in communities more equitable across social classes. Many of these suggestions are along the lines of not targeting the poor or non-white.  Protect and serve all citizens equally, remove punitive penalties for things like broken windows in poor neighborhoods, and have individual cops be held accountable when they break the laws they've been hired to stand for. Again, many police unions see these ideas as "anti-police".

While eyes are focused on New York City, as NYPD members have taken their own political protest against Mayor de Blasio for his sympathizing with both protesters and the families and friends of slain officers, Rochester has felt its own strain. A march organized by the city in response to the lack of indictment for Darren Wilson was initially cancelled (and picked up by B.L.A.C.K.) after backlash against Mayor Warren and the city with accusations of being "anti-police" despite the RPD's involvement in its organizing.  A week later a pro-police rally organized by conservative radio host Bob Lonsberry was also canceled (and privately picked up). The RPD had encouraged the cancellation of this one, with some public outcry about the "bad guys winning", even with people including local religious leaders citing that Lonsberry's actions would only raise tensions between poor, black communities in the city and the police.

Do you think Vitale's suggestions would improve police forces? Neighborhoods? The relations between the public and police? Personally I think background checks that screen for things like hate group membership/affiliation would help, as well as performance records/history from work in previous departments being seriously taken into account.

In the wake of the horrific killing of two NYPD officers, police union officials and their political allies have worked to isolate and vilify police accountability and racial justice activists. By claiming that the shooter was motivated by the protests they argue both that the protests should be suppressed and that there is no space for public criticism of the police. Both of these are profoundly troubling claims.

So far the policing of the protests in New York and many parts of the country have been tolerant and flexible and have helped to maintain the overall nonviolent character of the protests. The notable exceptions being Ferguson and Berkeley, where in both cases dissent was pre-emptively suppressed in a way that directly contributed to the outbreak of violence and property destruction.

New York City police union president Patrick Lynch said that it was the protests that led to the killing of the officers and that they shouldn’t be allowed to continue. This is revealing of a mindset of many police that there is something fundamentally inappropriate about protests and that the default position should be to discourage and if possible prevent them. It also speaks to a basic intolerance of police for disorder. Demonstrations by their nature are disorderly and disruptive and police find that at best off-putting and at worst dangerous.

Fortunately, it is up to the mayor to decide what approach the police should take to protests, and so far he has supported an approach that permits disruption in hopes of avoiding violence and property destruction. So far it has worked, but any effort by police to subvert that either from the top or through decisions made by individual officers or commanders on the ground could lead to more, not less, disruption or worse.

Pat Lynch, former mayor Rudolph Giuliani, and former governor George Pataki have all intimated that to criticize the police is to be anti-police. But what does this even mean? If I complain that my garbage hasn’t been picked up am I anti-sanitation? If I call and point out that the swings in the playground are broken, am I anti-parks?

Most of the protests have basically taken this approach. They want police to be a positive force in society, but feel that there needs to be significant reforms to how policing is conducted. They want officers held accountable for their misdeeds, and they want the police to treat them with basic respect, even if they are suspected of a crime. Is this what the police mean when they accuse people of being anti-police?

Now some protesters have accused the police as individuals of being racist and sadistic, while others have pointed to the entire institution as being structurally racist. Is the best way to deal with these accusations and improve police community relations to close ranks and go to “war” footing?

What about those that point not as much at the individual officers but to the system of laws and policies that shape the police role in society and are responsible for the mass criminalization of communities of color? Is their critique of the “war on drugs” and “broken windows” policing to be seen as “anti-police” even though it is directed at elected officials?

For Pat Lynch and many others, the answer to all these questions is yes. That is because they see the police playing a special role in society that should hold them above scrutiny or criticism. What we usually hear from them is that they put their lives on the line so the rest of us don’t have to—and in some ways this is very true. But there is a deeper tale to tell. The reality is that policing as it is currently organized has very little to do with violent crime. Day in and day out the police are primarily tasked with low-level enforcement actions that target the poor. That is because many of them and many of their leaders believe that the only thing preventing the complete collapse of civilization is them.

This is a profoundly conservative and narcissistic understanding of the world, and it is false. Too many police officers believe that left to their own devices, poor people of color will descend into barbarism. This is probably driven by two structural factors. One is that their job involves seeing people at the worst. The second is that they are enmeshed in a system based on the use of punitive sanction to control behavior and a kind of behaviorist obsession with the effectiveness of deterrence, in the face of all evidence to the contrary.

One of the intellectual mentors of the authors of the “broken windows” theory was Edward Banfield. Banfield argued that the poor were incapable of reacting to anything other than punitive force because of their moral corruption: “Although he has more ‘leisure’ than almost anyone, the indifference (‘apathy’ if one prefers) of the lower-class person is such that he seldom makes even the simplest repairs to the place that he lives in. He is not troubled by dirt or dilapidation and he does not mind the inadequacy of public facilities such as schools, parks, hospitals, and libraries; indeed, where such things exist he may destroy them by carelessness or even by vandalism.”

It is this mindset that undergirds the punitive nature of the “broken windows” theory and the mindset of many police. Therefore, when people talk about restricting the power of the police in any way, they aren’t just threatening the power of police as such, they are threatening the very stability of society. And many police deeply resent the criticism because they really do feel they risk their lives for the well-being of others.

In order to get out of this dysfunction dynamic, we need to focus intently on the ways in which communities can be made safe and functioning without relying on people with handcuffs and guns. Every time a community calls for more police to solve their crime and disorder problems, it is re-empowering not just the police but a deeply conservative ideology that is, at root, demeaning to poor people and dismissive of the ability of the state to use social programs and market interventions to empower and reinvigorate communities. The challenge is not to be anti-police or pro-police, it is to be pro-community.