"All I Want for Christmas is Justice!" A Protester's Dispatch 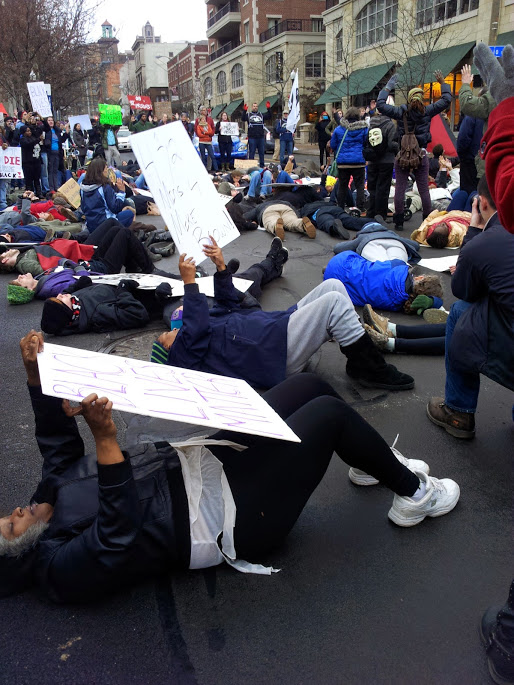 These past couple weeks have seen a resurgence in protests, between the killers of Michael Brown and Eric Garner not facing indictment, and last week's national fast food strikes.  As many of you know, Metro Justice has also been busy covering these protests in our own city either by assisting or being present. Nathalie Baptiste's article for The American Prospect takes a closer look at recent protests, and remind us we are seeing a new wave in the civil rights movement.

What stands out the most to me is the reason why people gather. First Amendment right to assembly is the obvious answer. The other, more subtle answer, is because protesting is accessible. Not everyone is eloquent or brave enough to lobby for change, and petitions can feel passive. Issues like crimes against justice feel overwhelming to the individual, leaving many to ask, "What can I do?" All you need for a protest is your presence in the crowd. All of those individuals gathering together adds up. The more people gather, the stronger their collective voice becomes. From there, you learn what else can be done.

Protesting creates community, something I felt when I attended the Black Lives Matter rally held the Sunday after Thanksgiving. I was in a group of mostly strangers, but I felt a bond as signs were passed around, as people sang and chanted, and we all affirmed the value of Rochester's black community as human beings. I would like to ask if you have attended a protest recently? What are your thoughts about protesting, and the forceful presence of law enforcement in other cities?

At the National Christmas Tree Lighting ceremony, the president and his family sought a moment of lightness. It was not to be had. The street in front of the White House was filled with demonstrators, who had blocked off highly-trafficked thoroughfares after the justice system once again failed to call police to account for the killing of yet another unarmed black person: Eric Garner, who died when a New York City police officer pushed Garner to the ground, wrapped his hands around the black man’s neck, and held them there while the man gasped for air. As traditional Christmas songs blared from speakers on the White House South Lawn, protesters chanted. “All I Want For Christmas” drew a spontaneous response: “All I want for Christmas is justice!”

(more after the flip!)

This is what democracy looks like. After a string of police killings of black people that are left unpunished, America has finally woken up. On August 9, Officer Darren Wilson fired multiple shots at an unarmed 18-year-old Michael Brown. His death reverberated across the nation. Demonstrations that first erupted in Ferguson, Missouri, trickled out first to neighboring St. Louis and spread to nearly every major city in the United States. When a grand jury decided that there would be no trial for the man that killed a child, the protests that were igniting finally exploded into a fiery blaze.

The momentum that had started in Ferguson and gained traction in cities where citizens aligned themselves with the St. Louis suburb’s aggrieved residents was in full swing when Officer Daniel Pantaleo—who, like Wilson, is white—was cleared by a grand jury on Wednesday night in the caught-on-video choking death of Garner in Staten Island, New York. If the Ferguson decision started a fire of passion, than the lack of justice for Eric Garner and his family started an inferno.

On Thursday night, it was hard to find a major city that did not have well-attended protests. After all, what city remains unscathed by police violence, especially against black people? In Washington, D.C., demonstrators marched for hours and miles, chanting, interrupting and inconveniencing for justice.

“Why are you out here?” I asked Tim, a 37-year-old black man, as we lay down on our backs in the middle of the intersection of 14th and Constitution Avenue in preparation for a form of protest known as a die-in. “I didn’t know what else to do.” That sentiment is widespread among the racially diverse crowd. Desiree, a 22-year-old biracial college student wasn’t sure how to fix the problem, but she knew one thing: “I knew I couldn’t just sit in my apartment.”

As protesters shut down 14th Street and the Metropolitan Police Department brought in officers on horses (who left a pleasant-smelling surprise), as commuters either cheered us on or let us know they disapproved by honking and glaring, and as people watching the protests go by on the sidewalk decided to be on the right side of history joined in, I realized something: this is the new Civil Rights Movement.

The 1991 beating of Rodney King at the hands of Los Angeles police officers and subsequent acquittals sparked the now infamous L.A. riots; those riots were mostly contained in L.A. neighborhoods fraught with racial tensions. The 2012 killing of 17-year-old Trayvon Martin by neighborhood vigilante George Zimmerman started a conversation. People began getting restless, but major demonstrations and mass civil disobedience had not yet arrived.

Michael Brown’s wrongful death appears to have sparked a movement that will go down in the history books. Why it was his killing, and not those of the countless other blacks killed by police, remains unclear for now. It’s not a question that requires an immediate answer. What is important is that America has finally awoken from its slumber. Large numbers of everyday citizens have taken it upon themselves to closing bridges, roads and shopping centers in order to make their voices heard. They are staging boycotts and organizing daily disruptions of the lives of those who refuse to listen.

A fire of passion for justice has been lit in America. Let’s keep it burning.