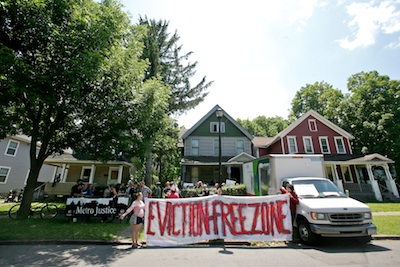 At Metro Justice, we believe that housing is an absolute necessity for all people. To us, Housing is a Human Right!

Clearly, we have a long ways to go until housing is treated as a human right in our society. We have thousands of homeless people, dwindling and crumbling public housing, and we continue to allow banks to push thousands of people out of their homes each year. In short, there is a lot to do if we hope to achieve a world in which Housing is a Human Right!

In the short term, Metro Justice has two demands on the city of Rochester:

1. A moratorium on the use of police to enforce bank foreclosure evictions.

Our five reasons for a moratorium on foreclosures explains why we believe that our police should no longer enforce the will of banks by evicting on their foreclosures. In many parts of the country, specifically San Francisco, CA and Cook County, IL local studies have found that the vast majority of bank foreclosures include outright bank fraud. We are asking that Mayor Richards order the police to discontinue enforcement of bank foreclosure eviction and that City Council pass this resolution in support of that policy.

Our allies in New York Communities for Change recently released this report, which identifies JP Morgan Chase as one of the worst major banks in New York State regarding their mortgage practices. They rarely negotiate with people to stay in their homes and even more rarely do they reduce the principal on the loan to ensure that people can sustainably stay in their homes. When our cities keep their money in these major banks, the banks profit in the millions. We are asking that the City of Rochester divest all public funds from JP Morgan Chase along with Buffalo, Binghamton, and Hempstead as part of a growing movement to hold the banks accountable!

Help us build a movement to ensure that everyone has access to quality housing! We can't do this without the support of our community!