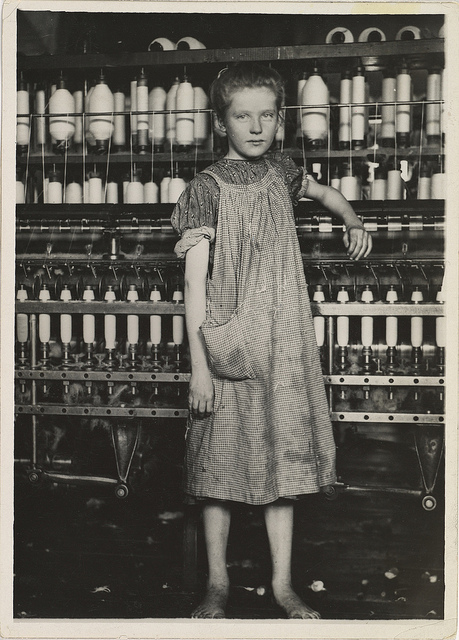 We talk of the "good old days" back when our economy was more manufacturing based. Steady jobs that could be held lifelong with full benefits and pay to assure your family was cared for, and a pension that will ensure comfort for the rest of your life. Those jobs were not always good, and it took decades of fighting to make work that was once dangerous and exploitative into work that provided that lifelong security we think of when we reminisce on the "good old days".

Claire Goldstene's article for Inequality.org reminds us that history is cyclical. Elements may change, but factors remain the same, and we can use that to our advantage. The same movement that brought collective bargaining and all its benefits to factory workers can be utilized to do the same for the service-based economy we live in today. Workers can stand up and demand living wages, benefits, sick pay, and other things that at one time were hard-fought givens for workers.

Even the arguments of opponents are the same, mainly that worker rights will damage business and the power of the "free market". Or that government stepping in and setting labor laws will violate the rights of the business, and how those rights are more important than the rights of the worker if we want society to keep going.

We're making steps towards change for the better. Changes in State minimum wage laws are proof, cities passing $15 an hour wages are proof, and the continued commitment of today's labor movement is further proof that if we continue we can win rights for service workers. If we are to look to the past, we should look to see that we again can accomplish what others before us have worked towards. If factory workers in the early 20th century can do it, service workers in this century can do it too.

Many of our older members may remember the days when we were a manufacturing economy, or even the days when those workers fought for hard-won labor rights. Please share your stories in the comments, would love to hear them!

Current campaigns across the United States to unionize service workers reflect a decades-long transformation, as service-sector employment outpaces that of manufacturing. But these efforts also occur amid a common mindset that too easily associates rates of pay, benefits, and job security with the nature of a particular job. Consequently, the prevalence of low wages, a lack of benefits, and sporadic and unpredictable schedules, so characteristic of the service economy, especially as compared to factory work, are regularly explained as inherent to this kind of labor. But such a view promotes a nostalgia about manufacturing jobs devoid of historical context. Poor working conditions are not intrinsic to service work itself, just as the decent pay of mid-twentieth century factory jobs was not intrinsic to that work. Rather, it resulted from coordinated pressure to make these jobs “good.”

Stagnant, or even declining, real wages for many over the last three decades, along with the expansion of temporary employment as normal, has prompted an understandable tendency to lament the loss of industrial jobs that offered long-term financial security and that allowed parents to reasonably expect a better economic future for their children. (This wistfulness, however, routinely fails to recall the nature of manufacturing work — usually dangerous, monotonous, and physically demanding.) Yet for many years those aspects of industrial work so yearned for today did not exist. Indeed, they followed from long-fought battles on the part of workers and their progressive allies.

As the United States became an increasingly industrial nation in the years after the Civil War, and prior to the establishment of any national social safety net in the form of unemployment insurance, workers’ compensation, Social Security, or Medicare, factory work, much of it performed by newly arrived immigrants, was typically low-paying, subject to few, if any, safety regulations, often seasonal, offered little promise of advancement, and meant 10-12 hour workdays, six days a week. Laborers also experienced diminished workplace autonomy and were frequently viewed as mere appendages of a machine.

In response to these conditions, workers began to organize. Owners, of course, resisted. Nineteenth-century opponents of labor reform argued, variously, that wages were set by the free market; that proposed regulation in regard to pay and hours constituted an inappropriate, and potentially dangerous, intrusion into the natural workings of the business cycle; that government regulation of employer-employee relations undermined the liberty embodied in a contract freely entered into by two independent entities; and that meeting demands for higher pay and reduced hours, such as the 8-hour day, for example, would cripple economic progress.

Successful efforts to remake poor and dangerous factory jobs into “good” jobs involved the formation of national labor unions, worker actions in the form of strikes and boycotts, violence between laborers and police, lobbying legislators, and galvanizing public support, which regularly entailed drawing attention to the vast disparities of income so characteristic of the American economic system. Ultimately, these goals were realized (particularly for white males) following enactment of the Wagner Act in 1935, which allowed for collective bargaining; passage of the 1938 Fair Labor Standards Act, which standardized the 40-hour work week and overtime pay, and established a minimum wage; and through a post-World War II accord among organized labor, business, and government to more broadly distribute wealth as beneficial to all. The current reminiscing about “good” factory jobs is, really, a nostalgia for the working conditions and pay made possible by decades of union struggle.

Certainly the policy choices that followed the election of Ronald Reagan in 1980 and continued through the first part of the 2000s — tax breaks for the wealthy, industry deregulation, the weakening of labor protections, and new obstacles to forming workplace unions — undid much of these gains for workers, widened the gap in wealth to levels not seen since the first Gilded Age, and saw the greatest job growth in sectors epitomized by low pay and little-or-no job security. But this part of history need not be an inevitable part of the present transition from manufacturing to service-sector employment. Just as factory jobs were made into “good” jobs in the 20th century, so too service sector jobs can be made “good” in the early years of the 21st century.