In the Struggle for Health Care Justice 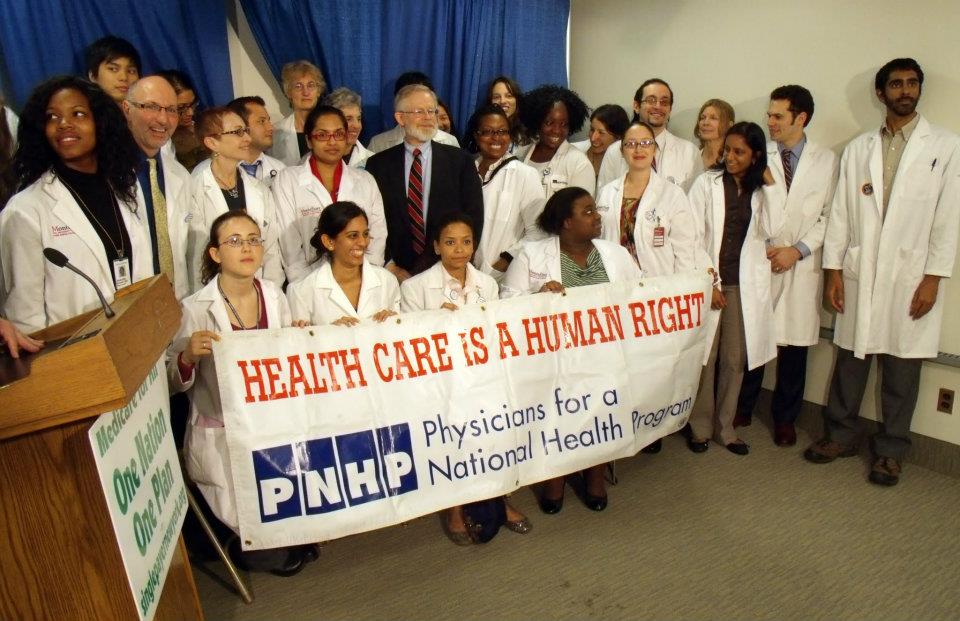 At Metro Justice we believe that "Healthcare is a Human Right", and that despite Healthcare Reform there is more we can do to assure that everybody can access the care they need. One of these ways is advocating a single payer system which would take corporate power out of the health care picture.

Marianne Hoynes has been a major supporter of the single payer system, and recently she was interviewed by Mickey Z for CounterPunch on her work to educate and encourage Americans to support the Single Payer Bill HR-676. Single payer has misconceptions that rival current "Obamacare" health measures.

Do you think single payer will help Americans achieve health justice? Why or why not? If not, what do you think would help?

I met Marianne Hoynes, a second-generation social activist, thanks to one of the many enduring networks spawned by Occupy Wall Street (OWS). Let me tell you a bit about her.

As a small child, Marianne followed a Quaker pacifist tradition, marching in various actions like protests to end the Vietnam War, to free Daniel Berrigan, and the Continental Walk to End Nuclear Disarmament. She grew up feeding the poor in the FISH nonprofit organization in central New Jersey, started by her parents and several other concerned citizens.

She is a health care activist who has lobbied on Capitol Hill on behalf of patients and doctors and an independent journalist who has written on many issues of social justice, including health care in the United States, Veterans for Peace, OWS, the National Defense Authorization Act, Icelandic politics, and about political prisoners like Jeremy Hammond and Chelsea Manning.

She lobbies also to keep Medicare solvent, to properly reimburse doctors for their Medicare patients, and for funding for the National Institutes of Health. Marianne has contributed to several independent films on the need for Health Care reform, including Got Healthcare Yet? by John Raymond, and the critically acclaimed film, The Healthcare Movie, narrated by Kieffer Sutherland, created by filmmakers Laurie Simons and Terry Sterrenberg.

Hoynes has learned firsthand what it’s like to be sick in America today and advocates for healthcare justice for Single Payer bill HR-676. Such a change, she declares, will allow “all Americans to have the exact same access to affordable health care, despite their illness or economic circumstance.”

MZ: How did your personal experience shape your perception and efforts on health care?

MH: In 2009, I went to a town hall meeting in Red Bank, N.J., to speak to my senator about health care reform. I did so because I could not afford the very expensive medications that would treat my autoimmune Rheumatoid Arthritis and Sjogrens Syndrome.

The co-pays for these chemotherapy type medications, also used to treat those who have survived devastating cancers, with Medicare, starts at $1,500 a month. People in the United States who have medicare part D are not allowed in any way, to receive financial help from pharmaceutical companies, due to a law that was passed in the 1980s.

At this town hall meeting, hundreds of Tea Party members, bused-in and paid by an unknown benefactor, tried to scream me down as I made my personal appeal to Senator Pallone. This is the first time I realized I had a real battle on my hands — not only to fight to save my own life but also the lives of tens of millions of other Americans who are experiencing the same injustice.

We have been made to feel so desperate for health care in this country, because of the actions of Big Insurance, or “the Health Insurance Industry,” in collusion with the U.S. government. I mean, we have literally had to watch our children die, when methods and doctors were standing by that could have saved their lives, all because an insurance company decided  that it did not want to take the financial loss to pay for our health care. Because that is what our health care needs are to Big Insurance — a loss to their bottom line, to their profits. And Obamacare puts this industry, by law, between us and our doctors.

MZ: Corporate propaganda has done such an effective job demonizing “single payer” and “socialized medicine,” what methods do you use and/or suggest in combatting this decades-long conditioning?

MH: In my experience, people cling to the limited propaganda they hear. The health care bill itself was written in “legalese,” so most Americans have never actually read it. What was first told to us about the bill is now something very different to what we have. But people have been made to live in such fear when it comes to our health needs that they want the new Obamacare law to be everything they need for it to be. It is not. Nor will it be.

I find that people who become sick or have a baby born into their family with special needs or have a devastating injury and are suddenly cast into the morass of finding a health insurance company that will give them affordable access to the care they need are the most willing to listen to what this new law provides and does not provide. They have to listen to the facts, because their need is now.

I am also a big believer in personal stories, catching media attention of people in great need. If the American people can see one of their countrymen getting let down by a great injustice by this system we have, it touches their compassion. They want to help. They want to know what about our laws failed this person or this family.

MZ: I’ve found the same trend on a wide range of issues. It’s a powerful myth of the elites that “the people” don’t know and don’t want to know the facts.

MH: Yes, and people are opening their minds up to the complicated facts of this law because they find out that one aspect of the law they counted on was something that the White House compromised on with Big Insurance in the years leading up to 2014. For example, many people still think that insurance companies must use 80 percent of the money we pay in premiums, towards our care. That was true when the bill was signed, but it is no longer true. Big Insurance demanded a pass on this requirement.

The White House tried to then negotiate down to 60 percent of our premiums getting used towards our health care but Big Insurance said that was still too much and they could not do it. So they are not. When someone hears a fact like that, something they counted on, a light goes off, and they want to hear more. That is the best way to counter the propaganda. Facts.

MZ: Based on your many interactions on this issue, do you believe Americans want a single-payer style system?

MH: It is a misconception — as part of the propaganda — that most Americans do not want single payer health care for all. The U.S. Government, along with Big Insurance, tried to scare us into believing that it was “socialism” or “communism.” They tried to convince us that a taxpayer funded system would mean long waiting lines for those with grave illness.

They tried to use Canada as an example of a bad socialized medical system, but then Canadians began to post YouTube videos of how much they love their public health care system. They let Americans know via social media that they love their system. Canada’s Medicare-For-All has had no opposition, on either the right or the left, and they want to keep improving it.

MZ: How is the insurance countering this reality?

Doctors just do not get reimbursed enough to treat the poor through this state program. So what Obamacare does is move many more people onto Medicaid who are guaranteed to then be under-insured with their medical needs under-served. If a person on Medicaid needs a treatment or a specialist that does not exist in their state, they cannot go to another state to get that specialized care. They cannot go to another state to get any other type of medical care, except as an un-insured American, because Medicaid is only recognized within the state of residency. None of this would happen with a single payer system.

MZ: In the meantime, do you believe Obamacare can/will help?

MH: Obamacare will help some people and I’m glad for that. All most people have to do is to look out for themselves and their family. I have a friend whose 19-year-old daughter is a cancer survivor. Being able to stay on her parent’s excellent health insurance until she’s 26 is all my friend needs to care about. And for the poor who finally do get Medicaid, and can finally access some kind of health care, that is meaningful.

My perspective, however, is the big picture — what is best for the 30 million people Obamacare was never meant to cover, according to the White House, and for the disenfranchised who are struggling to afford premiums, then deductibles, and then find they are under-insured and under served because they cannot afford to pay for medical care.

MZ: How would you describe “single payer” to a skeptic?

MH: A Single Payer system would mean that individual doctors’ offices would not have to run business offices. All of the billing would be centralized, as it is with Medicare. Single Payer would be an improved Medicare for allAmericans, regardless of one’s economic or social background.

Every American would have the same access to care as every other American. The rich would get the same treatment available to the poor and the middle class. It would end color lines and other types of discrimination. There would be no mystery — if you are sick, you get treatment. And it is affordable. Period. Done honestly, a Single Payer system would cut the cost of our care by two-thirds of what we are paying now, and improve health outcomes, which are very bad under our current system compared to most other countries.

MZ: How can people get involved in this struggle in a meaningful and effective way?

MH: There are two things we can all do. Call or write our Senators and Congress members to support the bill,HR-676 Single Payer Healthcare bill. This bill, sponsored by Rep John Conyers, has been backed by 33 members of the House, 26 international union, Physicians for a National Health Program, two former editors of the New England Journal of Medicine, National Nurses United, the American Medical Students Association and the NAACP. But it will have no movement or power, unless we the people demand healthcare justice, and ask our representatives to join in to support this bill.

Also, learn about what Obamacare does and does not do. I started a Facebook page called Conscientious Objector to Obamacare, inspired by an article written by Dr. Margaret Flowers from the PNHP. She is also one of the advisers on the page. It is both a teaching tool and a place where people can post, the good and the bad, about their experiences trying to get medical care under the ACA.