Kmart Workers Have to Come to Work Before Dawn on Thanksgiving 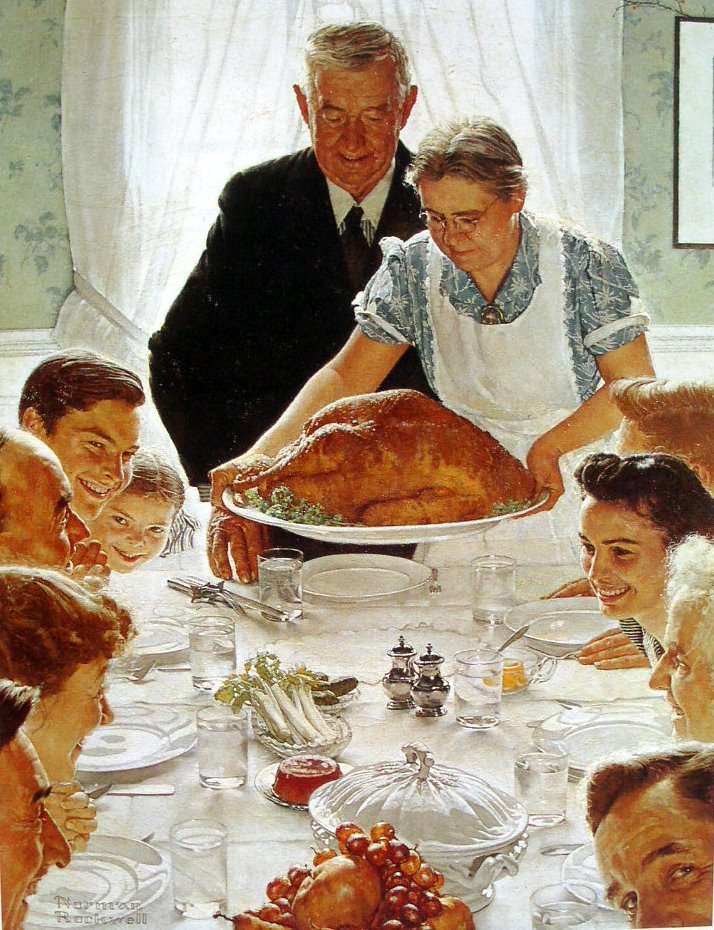 Every year during the holiday season pundits declare that there's a "War on Christmas".  Usually this war is related to the accommodation of spiritual and cultural plurality.  What about a "War on Thanksgiving"? Christmas decorations hit stores before Halloween. Our popular culture forgets Thanksgiving's existence until a week or so before. Black Friday shopping has also crept in, in recent years starting as early as 6pm Thanksgiving. Gives a whole new look to Normal Rockwell's "Freedom from Want", where an idyllic family gathers together for a turkey dinner, having plenty and enjoying one-another's company.

This year, Kmart plans on opening 6am on Thanksgiving. Kmart is expecting people to work, and people not working to go out and buy. For some workers the holiday pay may be a blessing, extra money to assure ends are met at the sacrifice of valuable family time. Either way, it's a holiday that is being taken over by the Commercialization of Christmas. Bryce Covert for ThinkProgress discusses the impact of stores opening early, as well as listing the stores that have chosen to close Thanksgiving.

Black Friday is an economic justice issue. Retail work is considered minimum wage labor, especially for those working at big box stores like Kmart. Some stores mandate working on holidays in hope of raking in extra profit by opening earlier. Other stores offer these shifts voluntarily, which are then taken by people who have the choice of time with their family, or making sure their family has their needs met. If you're not strapped for cash and stuck working, it's a reminder that you are one of society's have-nots, undeserving of the luxury of time off for a major holiday.

Of course there are alternatives to Black Friday shopping. Creative people can make gifts for their loved ones. You can always buy from independent mom-and-pop stores. You can also go to our Alternative Fair December 5th and 6th, where you can buy hand made and eco-friendly gifts from independent vendors. Supporting local business is great for the economy!

Kmart will open its doors for Black Friday shopping a whole day early, starting at 6 a.m. on Thanksgiving Day itself. Stores will remain open for 42 straight hours, closing at midnight on Friday, November 28.

Sears stores, which are owned by the same company, will also open that day — although later, with hours starting at 6 p.m. The company noted, however, that Kmart and Sears stores in Maine, Massachusetts, and Rhode Island won’t open, given their respective state laws that prohibit big box stores, department stores, and large supermarkets from opening on the holiday.

The day’s shifts will be filled by volunteers and seasonal workers who will be compensated with holiday pay, a company spokesperson told the Huffington Post. Last year, however, some Kmart workers reported that their requests to take the day off were denied, making their appearances less than voluntary.

American service sector workers are unlikely to be given paid holidays, since the country doesn’t guarantee them, and some who volunteer may be doing so because their regular schedules don’t give them enough hours to live on.

Kohl’s also announced that it will open at 6 p.m. on Thanksgiving Day. The stores join Macy’s, which was the first to announce its Thanksgiving hours that will begin at 6 p.m., and Walmart, which will be open all day and require nearly 1 million workers to come in on the holiday. This makes the second year in a row that a number of large retailers will begin Black Friday shopping on Thursday, and at least seven other brands did the same last year, although they have yet to announce holiday hours this year.

Other stores, however, have gone a different route. Nine brands — American Girl, Burlington, Dillard’s, Coscto, GameStop, Nordstrom, Patagonia, REI, and TJX stores T.J. Maxx and Marshalls — have decided to be closed on the holiday. As Costco put it, “Our employees work especially hard during the holiday season and we simply believe that they deserve the opportunity to spend Thanksgiving with their families.” Dillard’s, GameStop, and TJX all also said their decisions were driven by the desire to give employees time to celebrate with family and friends.

Those stores probably don’t need to worry about losing out on sales. Last year, salesdidn’t get any extra boost at those that opened on Thanksgiving. Consumers said theywouldn’t shop on that day anyway and most disapproved of the early hours, with a sizable share saying it made them less likely to shop at a given store. At Kmart and Sears, comparable-store sales fell sharply during last year’s holiday season.