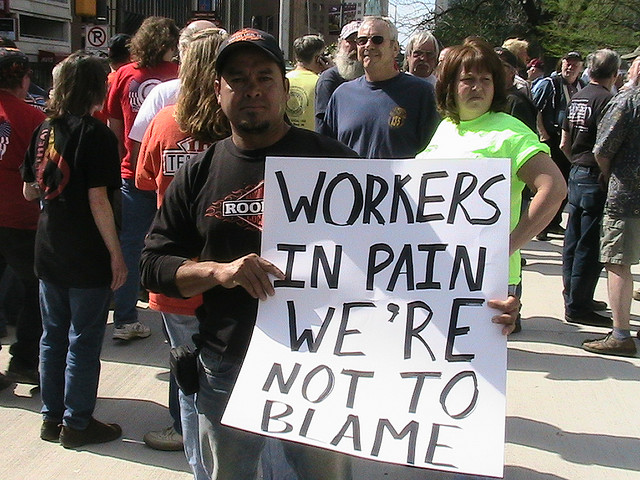 Sometimes it's good to look at what other countries have done to not only improve their economies, but the quality of life for their citizens. Janet Alton discusses Paul Krugman's latest New York Times piece and how European countries, France in particular, go against what Krugman describes as "reverse Robin-Hoodism". Europe hasn't always been so stable or just. In recent past countries like France faced their own economic crisis and high unemployment. Should we take a page from France's book when it comes to job creation? What are some other policies you have seen from different countries that have created more just societies?

Paul Krugman wrote his column this morning in the New York Times from Europe, a place which—conservatives like Paul Ryan would like you to believe—demonstrates the complete failure of the welfare state. That's because, as Krugman points out, "Our political discourse is dominated by reverse Robin-Hoodism — the belief that economic success depends on being nice to the rich, who won’t create jobs if they are heavily taxed, and nasty to ordinary workers, who won’t accept jobs unless they have no alternative."

France, a country that the American media and conservatives particularly love to bash, is having particular success in employment rates. Krugman reports this "startling, little-known fact: French adults in their prime working years (25 to 54) are substantially more likely to have jobs than their U.S. counterparts."

Hmmm. There's a story you won't hear told in the mainstream media.

It wasn’t always that way. Back in the 1990s Europe really did have big problems with job creation; the phenomenon even received a catchy name, “Eurosclerosis.” And it seemed obvious what the problem was: Europe’s social safety net had, as Representative Paul Ryan likes to warn, become a “hammock [3]” that undermined initiative and encouraged dependency.

But then a funny thing happened: Europe started doing much better, while America started doing much worse. France’s prime-age employment rate [4] overtook America’s early in the Bush administration; at this point the gap in employment rates is bigger than it was in the late 1990s, this time in France’s favor. Other European nations with big welfare states, like Sweden and the Netherlands, do even better [5].

What about young people? Doesn't America, with all of its problems, still kick France's ass when it comes to the employment rate of those younger than 25. Yes, Krugman concedes. Then he wonders if that is something we should be bragging about, since it is certainly due in part to the fact that French students receive a lot more financial aid for their education than American students do, so they are not immediately saddled with huge debt to work off, much less work their way through school.

"Is that a bad thing"" Krugman wonders.

Also, the French take more vacations and retire earlier than we do.

How horrible! Who would want to live in a place like that.

But, getting back to Krugman's main point: "On the core issue of providing jobs for people who really should be working, at this point old Europe is beating us hands down despite social benefits and regulations that, according to free-market ideologues, should be hugely job-destroying."

In fact, he writes, our "cruel experiment" in depriving so-called lazy unemployed Americans of their long-term benefits so they will get off their asses and look for work has been an abject failure. Did people in terrible straits find jobs?

"No — not at all [6]," Krugman replies. "Somehow, it seems, the only thing we achieved by making the unemployed more desperate was deepening their desperation."

Will people listen to the European example? Krugman is doubtful. He concludes:

I’m sure that many people will simply refuse to believe what I’m saying about European strengths. After all, ever since the euro crisis broke out there has been a relentless campaign by American conservatives (and quite a few Europeans too) to portray it as a story of collapsing welfare states, brought low by misguided concerns about social justice. And they keep saying that even though some of the strongest economies in Europe, like Germany, have welfare states whose generosity exceeds the wildest dreams of U.S. liberals.

But macroeconomics, as I keep trying to tell people, isn’t a morality play, where virtue is always rewarded and vice always punished. On the contrary, severe financial crises and depressions can happen to economies that are fundamentally very strong, like the United States in 1929. The policy mistakes that created the euro crisis — mainly creating a unified currency without the kind of banking and fiscal union that a single currency demands — basically had nothing to do with the welfare state, one way or another.

The truth is that European-style welfare states have proved more resilient, more successful at job creation, than is allowed for in America’s prevailing economic philosophy.