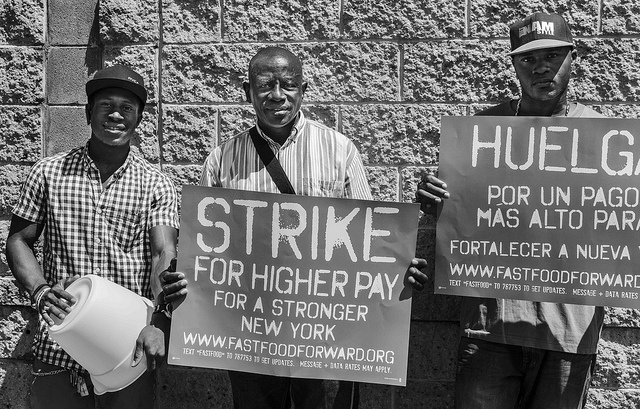 With today being largest national day of fast-food strikes in protest of our current dismal minimum wage this article comes as no surprise. Momentum for a $15 an hour wage has been growing for over a year, and with this year's midterm elections the length of the battle could be determined by who goes into office.

What we really need to remind our culture is that this is an ongoing effort that requires active support for the long haul. Many movements feel come and go in our culture, which seems to have a short-term attention span at times. John Nichols, writing for The Nation, reminds us this. Nichols also gives us a peek into the legislative aspect of the minimum wage movement, and who to nudge for support. If anything is to be accomplished, advocates for minimum wage workers have to consistently stand by them. Not to discount the power of the vote, but as a reminder that a tandem approach is best.

We would like to sincerely thank everyone who joined us during today's strike. For any of you who were unable to make it, there are other ways you can support workers. Opportunities to volunteer or join us for events are listed on the Get Involved page of our website.

President Obama launched the fall campaign season with a robust call for increasing the minimum wage.

The president wasn’t trying to convince the American people. They know that increasing the minimum wage is necessary to address income inequality and the injustice of a circumstance where millions of American families are struggling because their hard work is not adequately compensated. A poll conducted last summer for the National Employment Law Project Action Fund found that 80 percent of Americans surveyed favor a $10.10-an-hour wage floor. Ninety-two percent of Democrats favor the increase, as do 80 percent of independents and 62 percent of Republicans.

This enthusiasm is not just theoretical. It is immediate. Seventy-four percent of Americans say that Congress should make it a priority to significantly increase the minimum wage.

That focus on Congress is the key, as Obama acknowledged when he noted Monday that “in the year and a half since I first asked Congress to raise the minimum wage—of course, the Republicans in Congress have blocked it.”

This emphasis on voting, on the fall election, echoes the elite consensus in Washington that, while hiking the minimum wage (up to $15-an-hour) has become a big issue at the state and local levels of government, Congress will not budge on this issue. That consensus says that only an election will change the shape of things to come.

Of course elections matter. But they are not an excuse for putting progress on hold.

The House and Senate will be in session this fall. A proposal to increase the base hourly wage to workers from $7.25 to $10.10 has been advanced. Top Republicans are on board for a higher minimum wage, with Mitt Romney saying “We ought to raise it,” and Rick Santorum saying “It just makes no sense” to oppose an increase.

Members of the Senate Democratic majority back higher wages and, despite the obstructionist tactics of Senate minority leader Mitch McConnell, the prospect of a high-profile vote just weeks before a critical national election might even get some Republicans—like Maine Senator Susan Collins— to do the right thing.

So where’s the problem? In the House.

Speaker John Boehner, R-Ohio, has shown no inclination to allow a vote. But the rules of the House allow a majority of members to go around the speaker and use a “discharge petition” to force a vote, which is precisely what the Time for a Raise campaign being championed by Ralph Nader argues is the right approach.

Nader and his allies are not just theorizing here. They are outlining strategies, naming names(of Democrats and Republicans) and proposing action.

“To date, 195 House members have signed the petition, meaning only 23 more member signatures are required to bring H.R. 1010 to a vote,” argues the Time for a Raise message going into the fall. “There has been insufficient effort by House Democrats, concerned Republicans, labor unions and poverty organizations to mount an effort find and persuade the 23 House members needed to complete the discharge petition and bring a raise in the federal minimum wage to a vote.”

“Time for a Raise” argues that Democratic leaders in the Senate and the House should ramp up the push for a minimum-wage hike as soon as their return to Washington.

Nader and his allies have produced compelling political math.

“To catalyze action,” they explain in a new action plan, “the Time for a Raise campaign has identified 55 House members worth pressuring to sign H.R. 1010’s discharge petition:

(a) 3 House Democrats who have not co-sponsored H.R. 1010 nor signed it’s discharge petition;

(b) 6 House Republicans who signed a letter to then-majority leader Boehner in 2006 arguing that “Nobody working full-time should have to live in poverty”;

(c) 17 House Republicans from districts won by President Obama in 2012;

(d) 26 other House Republicans who voted for a minimum wage increase in 2007; and

Among the House members listed are Congresswoman Shelley Moore Capito, a West Virginia U.S. Senate candidate who have advocated in the past for wage hikes, and House Budget Committee chair Paul Ryan, who has been trying to portray himself – with a new book and speaking tour—as a compassionate conservative friend of working families. They should both sign the petition, as should House Republicans in swing districts and reluctant Democrats who represent thousands of families that would experience an immediate improvement in their circumstance with a minimum-wage increase. A refusal to sign the petition by candidates of either party sends a “Which Side Are You On?” message to voters that goes far beyond partisanship or ideology as the November 4 election approaches.

But this is not just about Republicans. Democrats have to step up. When the discharge petition was circulated last winter, Wisconsin Congressman Mark Pocan declared, “The minimum wage is woefully inadequate to help keep hard-working people out of poverty. When millions of Americans who work hard and play by the rules cannot support themselves or their families, when they live in poverty, we face an economic crisis. That’s why we must raise the minimum wage, which would give 24.5 million Americans and more than 500,000 hard-working Wisconsinites a pay raise and generate $500 million in increased economic activity in our state alone.”

That’s a powerful message that Pocan has continued to push the issue at every turn, going so far as to propose an amendment to the Republican budget as a vehicle to force a minimum-wage vote.

That’s the right idea, and the right level of aggressiveness.

Now, as members of the House return to Washington, Democrats should take up the call—not as an election issue but as an immediate demand for action. As Nader has illustrated, it is possible to turn the volume up on this issue quickly, and effectively.

Congress should put politics aside and raise the minimum wage. Now!