Overwhelming Evidence that Half of America is in or Near Poverty 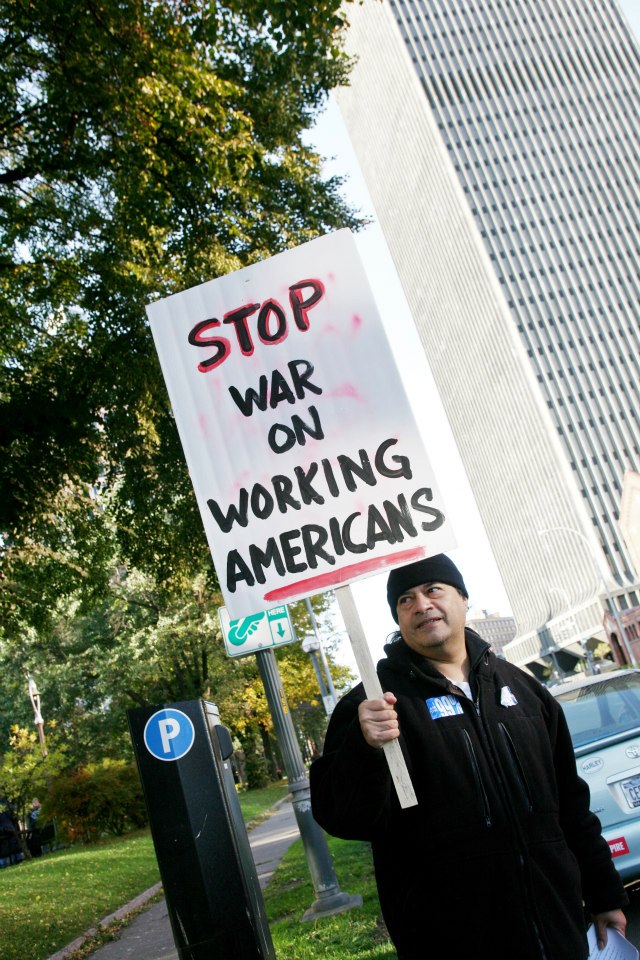 Poverty has changed in America. Being poor doesn't mean you live in a shelter. $35,000 a year is not enough to raise a family. What do you think is enough to sustain a household? The article "Overwhelming Evidence that Half of America is in or Near Poverty" by Paul Buchheit, and published on Alternet gives some statistics on what modern poverty is in America. What are your thoughts?

The Charles Koch Foundation recently released a commercial [3] that ranked [4] a near-poverty-level $34,000 family among the Top 1% of poor people in the world. Bud Konheim, CEO and co-founder of fashion company Nicole Miller, concurred [5]: "The guy that's making, oh my God, he's making $35,000 a year, why don't we try that out in India or some countries we can't even name. China, anyplace, the guy is wealthy."

Comments like these are condescending and self-righteous. They display an ignorance of the needs of lower-income and middle-income families in America. The costs of food and housing and education and health care and transportation and child care and taxes have been well-defined by organizations such as the Economic Policy Institute [6], which calculated that a U.S. family of three would require an average of about $48,000 a year to meet basic needs; and by the Working Poor Families Project [7], which estimates the income required for basic needs for a family of four at about $45,000. The median household income [8] is $51,000.

The following discussion pertains to the half of America that is in or near poverty, the people rarely seen by Congress.

1. The Official Poverty Threshold Should Be Much Higher

According to the Congressional Research Service [9] (CRS), "The poverty line reflects a measure of economic need based on living standards that prevailed in the mid-1950s...It is not adjusted to reflect changes in needs associated with improved standards of living that have occurred over the decades since the measure was first developed. If the same basic methodology developed in the early 1960s was applied today, the poverty thresholds would be over three times higher than the current thresholds."

The original poverty measures were (and still are) based largely on the food costs of the 1950s. But while food costs have doubled since 1978 [10], housing has more than tripled, medical expenses are six times higher, and college tuition is eleven times higher. The Bureau of Labor Statistics [11] and the Census Bureau [12] have calculated that food, housing, health care, child care, transportation, taxes, and other household expenditures consume nearly the entire median household income [8].

CRS [9] provides some balance, noting that the threshold should also be impacted by safety net programs: "For purposes of officially counting the poor, noncash benefits (such as the value of Medicare and Medicaid, public housing, or employer provided health care) and 'near cash' benefits (e.g., food stamps..) are not counted as income."

But many American families near the median are not able to take advantage of safety net programs. Almost all, on the other hand, face the housing, health care, child care, and transportation expenses that point toward a higher threshold [13] of poverty.


2. Almost Half of Americans Own, on Average, NOTHING

This nonexistent net worth is due in great part to the overwhelming burden of debt for Americans, which now includes college graduates entering the work force. The average student loan balance has risen 91 percent [18] in the past ten years.

This is based on the Census Department's Relative Poverty Measure (Table 4) [19], which is "most commonly used in developed countries to measure poverty." The Economic Policy Institute [20] uses the term "economically vulnerable." With this standard, 18 percent of Americans are below the poverty threshold and 32 percent are below twice the threshold, putting them in the low-income [7] category.

The official poverty rate increased by 25 percent between 2000 [21] and 2011 [22]. Seniors and children feel the greatest impact, with 55 percent of the elderly and almost 60 percent [19] of children classified as poor or low-income under the relative poverty measure. Wider Opportunities for Women [23] reports that "60% of women age 65 and older who live alone or live with a spouse have incomes insufficient to cover basic, daily expenses."


4. It's Much Worse for Black Families

Incredibly, while America's total wealth has risen from $12 trillion [24] to $77 trillion [25] in 25 years, the median net worth for black households has GONE DOWN [26] over approximately the same time, from $7,150 to $6,446, adjusted for inflation. State of Working America [27] reports that almost half of black children under the age of six are living in poverty.


5. Nearly Half of American Households Don't Have Enough to Hold Them for 3 Months

That's according to the Corporation for Enterprise Development [28]. Even more striking, a survey by Bankrate.com [29] concluded that only one in four Americans has "six months' worth of expenses for use in emergency, the minimum recommended by many financial planning experts."


It Would Be Much Worse without the Safety Net..

The Center on Budget and Policy Priorities [30] estimates that without food stamps and other safety net initiatives, the poverty rate would be double the official rate. Economist Jared Bernstein [31] quantifies the importance of Social Security, arguing that without retirement benefits the elderly poverty rate would be five times the current rate.

The Koch Foundation and Mr. Konheim need to look beyond their own circles of privilege before making insulting comments about the lower-income half of America.