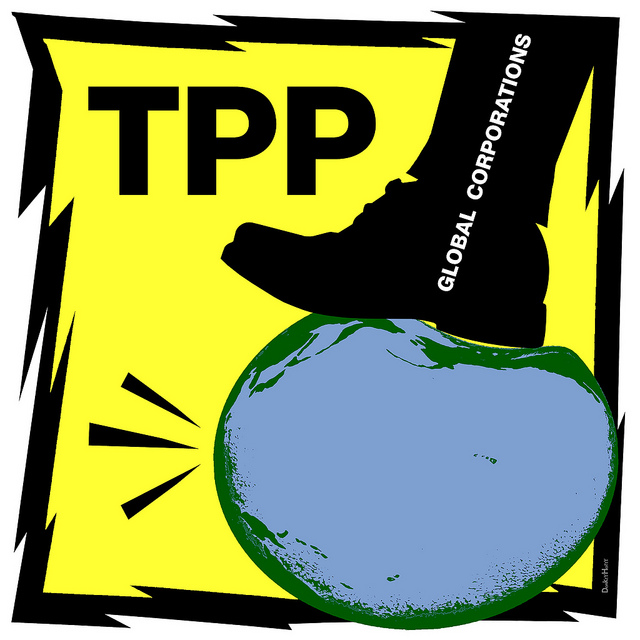 Many of us agree that free trade agreements are bad news. Jobs are shipped overseas where labor is cheaper, increasing poverty for both us and whichever country the labor has been offshored to. Environmental protections and workers' rights are eroded to accommodate the needs of whatever multinational corporate entity benefits from the agreement. These agreements essentially only benefit major companies, and any commodity based benefits we reap (such as cheaper products) are at the expense of someone else. Free trade agreements promote exploitation.

President Obama has been a major cheerleader of the Trans Pacific Partnership, or TPP, a major NAFTA-esque free trade agreement that has been drafted up completely in secret. He has shot down major critics, including several other democrats, in favor of this bill. Despite what progress he has made, his defense of such a damaging bill paints him as a corporate tool.

In a blog post for The Nation, John Nichols discusses both the dangers of the TPP as stated by opponents well-aware of the problems created by past free trade agreements, and how Obama should take the time to listen to the bill's critics. History has stated these bills create more economic turmoil than they resolve.  Let's not forget that it will likely give corporations power to override a country's laws if they want to take legal action against somebody. Corporations will literally be above the law.

Rochester should be worried, as a former boomtown coming back from the brink the TPP could potentially undo what steps we are making to recover our economy. Those manufacturing jobs that are returning could potentially be shipped to China and other places to save money. In turn, the poverty we are currently facing will only get worse. Opposing the Trans Pacific Partnership is fighting for economic justice.

President Obama takes it personally when Americans disagree with his free-trade fundamentalism. He keeps griping about the activists who usually support his agenda but arepassionately opposed to his request for “Fast Track” authority to bypass congressional input and oversight on a sweeping Trans-Pacific Partnership trade deal. And the president is even more upset that Democratic members of Congress are, for the most part, aligning with the activists rather than the White House.

“There have been a bunch of critics about trade deals generally and the Trans-Pacific Partnership,” he told the crowd that was assembled last week for his appearance at the corporate headquarters of Nike, a U.S.-based firm that (with its contractors) now employs roughly 40 overseas workers for every one American.

Even if everything Obama promises about the benefits of free trade and the TPP were to come true—an exceptionally unlikely prospect if the history of trade pacts is any guide—the ratio of overseas workers to Americans employed by Nike and its contractors would at best shift to a roughly 30-1 ratio. That best-case scenario, everyone admits, would take more than a decade to be achieved. And, though fewer admit it, much of the new employment would likely involve technical workers developing automated production schemes that reduce rather than increase living-wage employment in the U.S. and abroad.

These are points that foes of Trade Promotion Authority and the TPP have made in precise and thoughtful detail, and with substantial support from economists and policy analysts.

Yet, Obama dismisses those who disagree with him as somehow wrongheaded and ignorant. “(What’s) interesting is typically they’re my friends coming from my party,” he said of the Fast Track and TPP critics. “And they’re my fellow travelers on minimum wage and on job training and on clean energy and on every progressive issue, they’re right there with me. And then on this, they’re like whupping on me.”

Why does the president think this is so? “(On) this issue, on trade,” he says, “I actually think some of my dearest friends are wrong. They’re just wrong.”

Obama’s line disrespects sincere union members, environmentalists, civil rights and human rights activists, as well as Democratic members of the House and Senate, who have an honest disagreement with their president.

It also harms Obama’s credibility, as it suggests he may be unaware of the long experience, and the deep insight, possessed by progressive critics of free-trade absolutism. The largest and steadiest public-education project on a major economic issue in modern history has played out over the past quarter century in union halls and church basements an community centers across the country, as Americans have wrestled with the promises and realities of trade policy.

The people the president says are "wrong" are not unthinking protectionists or crude isolationists. They are supporters of workers, the environment and human rights in the United States and abroad. They have come to recognize that, while fair trade holds immense promise, free trade along the lines the U.S. has practiced it in recent decades has done immense damage.

The most ardent opponents of Fast Track and the TPP have first-hand experience with failed trade policies. They have seen what the North American Free Trade Agreement, the permanent normalization of trade with China and other trade arrangements have done to their communities.Their current position is rooted in an understanding that, as Minnesota Congressman Keith Ellison (a co-chair of the Congressional Progressive Caucus and an early supporter of Obama's 2008 presidential run) says, "We cannot afford to rush through another NAFTA that values corporate profits above families."

As a presidential candidate in 2008, Obama visited many of those communities and stood side-by-side with many of the leading opponents of ill-thought and poorly-administered trade agreements. He decried “a Washington where decades of trade deals like NAFTA and China have been signed with plenty of protections for corporations and their profits, but none for our environment or our workers who’ve seen factories shut their doors and millions of jobs disappear…”

Now, Obama suggests that those he once sided with are suddenly clueless.

That is not the case.

‎“American workers have seen the effects of unfair foreign trade on their jobs and manufacturing facilities—they don't need their elected leaders making personal attacks on each other during an important policy debate," says Ohio Senator Sherrod Brown, a Democrat who remembers when Obama stood with the critics of failed free-trade policies.

“During the 2008 presidential primary, I watched President Obama argue in Cleveland that we should renegotiate NAFTA. Instead, we've seen more empty promises of jobs through exports while American workers are hit with a flood of imports and jobs shipped overseas," says Brown. "It's clear that the American public doesn't support these trade deals and I am disappointed the president has resorted to name calling in an attempt to shift the debate."

Brown's opposition to Fast Track and the TPP is inspired by what he has seen happen to Ohio communities like his hometown of Mansfield, and in statistics that confirm the failure of trade deals to live up to promises made by Republican and Democratic presidents:

The Obama Administration predicted that the South Korea Free Trade Agreement would create 70,000 jobs and deliver up to $11 billion in exports. Instead, it only increased U.S. exports to Korea by $1 billion, while Korean imports have skyrocketed to more than $12 billion. The growing good trade deficit with Korea has eliminated over 75,000 jobs in the last three years.

The U.S. already has a trade deficit with Japan and 10 other countries included in the TPP. Since 1997, the deficit with these countries has increased by $151.4 billion.

Congresswoman Louise Slaughter, a Democrat who has worked on trade policy since the 1980s, explains that the president’s suggestion that his critics do not understand the issue is “absolutely inaccurate.”

“We know exactly what we’re talking about,” says Slaughter, the daughter of a coal miner who has charted trade-related factory closings and job losses in her upstate New York district for decades. “My concern is that he does not understand what’s in it.”

Congressman Mark Pocan, D-Wisconsin, explains that, “Over the last three decades, in large part because of bad trade deals like NAFTA and CAFTA, Americans have worked harder than ever for less. In fact, hundreds of thousands of jobs—factory jobs, middle-class jobs—in states across the country were lost.”

Pocan’s a native of Kenosha, Wisconsin, an auto-making town for more than a century that saw the closing of its Chrysler plant in 2010—despite the fact that the plant had been recently modernized and rated as one of the most efficient in the United States. “Anyone who does not see the connection between our economy and the failed trade agreements of the past,” says the congressman, “will remain on the wrong side of the future.”

It is not ignorance but experience that has caused so many progressive members of Congress to join activist groups that have developed deep expertise on trade policy to oppose the president’s embrace of the trade agenda of Senate Majority Leader Mitch McConnell and House Speaker John Boehner.

Major unions have developed research teams to study trade and worked closely with experts on trade policy for decades now. They have also aligned with international trade unions to oppose the free-trade absolutism of the president and his Wall Street backers. Labor’s opposition to “fast track” and a TPP deal that the Communications Workers of America union refers to as “NAFTA on Steroids” is driven by fact—not fantasy.

The same goes for the criticism of current trade policies expressed by environmental organizations such as the Sierra Club and Friends of the Earth, and for the outspoken opposition to Fast Track by progressive farm groups such as the National Farmers Union.

Opposition to Fast Track and the TPP is rooted in the fact of trade deficits and in the facts on the ground witnessed by those who voice the criticism. Yet, critics of free trade do not see the current wrangling over Fast Track and the TPP merely from the perspective of the past. As Pocan says, “People recognize that this is a fight for the future.”

The president has every right to side with Wall Street in trade debates. But he does his cause no favors by suggesting that those who sincerely disagree with him unaware of what is at stake. In fact, the reason they are opposing Obama’s Fast Track request is because they know precisely what is at stake.