Rally in Albany to RaiseUp NY! 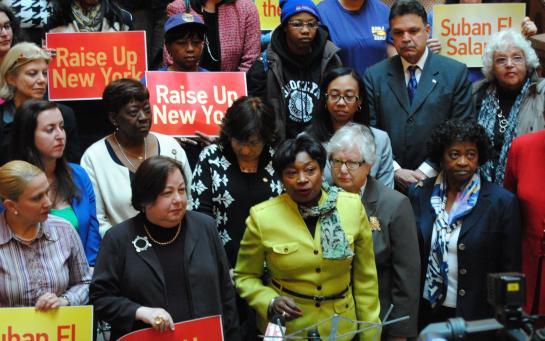 The fight to increase wages from some of the lowest paid New Yorkers is forcing state politicians to take notice! Until the last couple of weeks, Governor Cuomo thought he would be able to run for Governor without any meaningful support for increasing the state minimum wage.

In the last two weeks he has come out in support of a minimum wage of $10.10 that is tied to inflation and would raise a little every year. In addition to that, he is supporting local governments ability to raise the wage up to 30% higher without having to go through Albany.

We will continue to organize with fast food workers to demand $15/hr and a union! But this proposal will go a long way towards pulling thousands of workers our of poverty and there is a chance that we could pass it this month!

Get on the bus to take part in this statewide day of action in Albany!

The bus will leave at 7am from the NYSUT Offices (30 N. Union Street). Sign up here to reserve your seat!