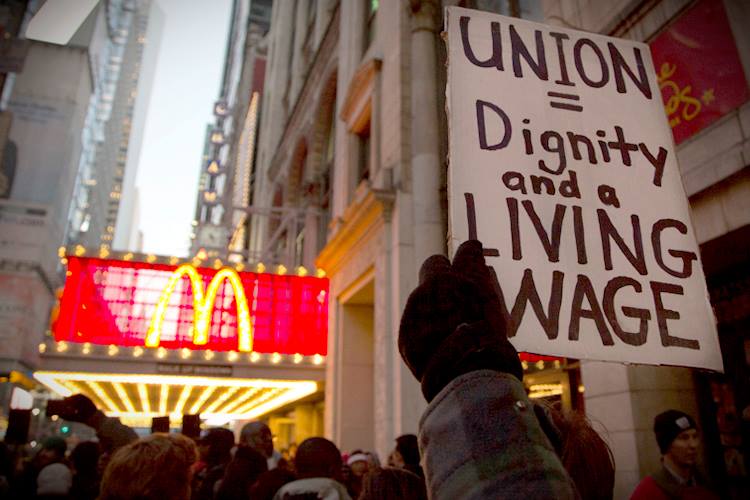 While this doesn't come as a surprise, there is actual research behind the title. States with a higher minimum wage are also showing improved employment rates over states with lower minimum wage. One argument could be that with fewer people needing second (or third) jobs there are more jobs to go around. Another could be that with greater consumer power there is greater demand for products and services outside of the bare essentials.

Lauren McCauley's article for Common Dreams gives us some statistics and background on a recent Labor Department study that tracked several states, their minimum wage, and job growth. This is great information, especially as we stand with fast food workers in the Fight for 15.  You're invited to join us in this effort to help bring about a $15 an hour minimum wage that will allow our city's most vulnerable workers a living wage, and a economically just community. Please sign up! If you have any ideas that can help our efforts, please share them in the comments.

Adding fuel to the growing populist call for a higher minimum wage and throwing water on the conservative argument that fair pay will threaten employment, new data released Friday shows that states with higher wages are gaining more jobs.

According to an Associated Press analysis of the Labor Department's latest hiring statistics, in the 13 states that raised their minimum wage at the beginning of 2014, the number of jobs grew an average of 0.85 percent from January through June—compared with just 0.61 percent in the remaining states.

"It raises serious questions about the claims that a raise in the minimum wage is a jobs disaster," said John Schmitt, a senior economist at the Center for Economic and Policy Research. Schmitt added that although the data "isn't definitive," is is "probably a reasonable first cut at what's going on."

Despite failure on the federal level to pass any minimum wage legislation, the call to increase the national wage has grown. Recent polling (pdf) by the American Sustainable Business Council and Business for a Fair Minimum Wage found that 61 percent of small business owners support raising the federal minimum wage to the White House-proposed $10.10.

"Small business owners understand that their success depends on the overall health of the U.S. economy, since by and large they can’t export their way out of a slump in the U.S." David Brodwin, co-founder and board member of the American Sustainable Business Council, wrote in a recent op-ed.

“This new polling data contradicts the oft-repeated claim that raising the minimum wage will kill profits, eliminate jobs and cut growth. Apparently the people doing the hiring and paying the difference don’t agree with those dour predictions.”