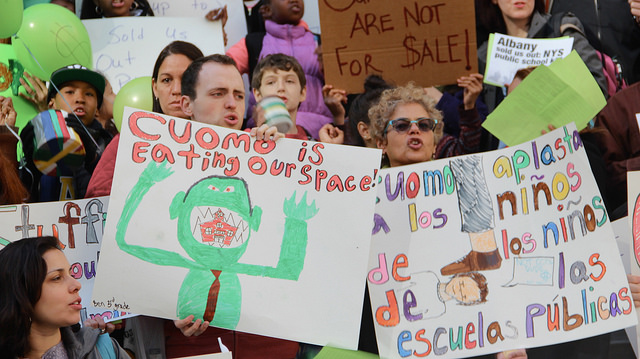 Many of you received calls from Metro Justice on Monday urging you to call your State Senator to voice concerns about what Cuomo's budget plans are for education.  The biggest fear, that New York State's plans for interventions at failing schools will close those schools down and replace them with privatized institutions like charter schools.

Many of us in Rochester can attribute the struggle of our schools to a mix of severe poverty and a system that teaches high-stakes tests over pursuing a worthwhile education. Rochester City Schools is the poorest school district in the state, and while many dedicated educators work hard to provide for their students, that dedication can only go so far. Supply budgets run short, some teachers even take to paying for supplies and resources for students out of their own pockets. Teaching tests takes away time that can be spent on helping struggling students keep up with their peers. Now consider the sizable refugee population, where these burdens are doubled for some between keeping up with Common Core state standards while learning English as a second language.

Lauren McCauley's article for Common Dreams covers recent protests against Cuomo's budget plans for education. It's a reminder that Cuomo is a politician who shamelessly sides with hedge fund managers with investments in things like the charter school industry. It's a reminder that he doesn't really care about his average citizen, preferring to favor the 1% and their agenda. It's a sign that we need sweeping reforms in education to place the value back on learning.

Did you call your Senator on Monday? Know any alternatives that can help local schools that don't involve state government intervention?

Parents, teachers, and students from across the state flooded the streets of Manhattan on Saturday to call out Governor Andrew Cuomo for selling out the public school system.

"Wall Street got a bailout. Public schools were sold out," was the message as protesters rallied, surrounded by NYPD barricades, outside Cuomo's 3rd Avenue office building. The group is calling on the state government to fully fund public schools, limit high-stakes testing, support struggling schools, fairly evaluate teachers, and stop the expansion of charter schools.

Organized by a coalition of groups, the demonstration included former progressive gubernatorial candidate Zephyr Teachout, as well as other members of the Hedge Clippers—a recently founded campaign, backed by Teachout, as well as the American Federation of Teachers, and other prominent labor and community groups.

According to the group's site, the Hedge Clippers seek to "expose the mechanisms hedge funds and billionaires use to influence government and politics in order to expand their wealth, influence and power" by calling out the politicians who do their bidding.

During Saturday's protest, the group wielded large paper scissors and held signs accusing Cuomo of being the "number one recipient of hedge fund cash." Throughout the day, images from the demonstration were shared widely on Twitter as well as on the United Federation of Teachers Facebook page.

The protest follows weeks of actions targeting the Cuomo administration as lawmakers weigh the governor's proposal to tie more than $1 billion in school aid to an overhaul of the teacher evaluation system, which places extra emphasis on standardized test scores. Hundreds of people rallied at the Albany Capitol on Thursday and last week teachers from upstate New York delivered the governor 1,000 apples—each representing "a local teaching position unfilled because of years of underfunding for public education."

Groups say that the hedge fund and Wall Street billionaires, which "bought control over the New York State Senate this past election," are seeking to starve the public school system "through subsidies to private and parochial schools and through privately-run charter schools."

"Don't let Wall Street buy our public education system the way they bought the last election," reads a petition being circulated by the Alliance for Quality Education, Citizen Action New York, New York Communities, the Strong Economy For All Coalition, and the Working Families Party.