The Coming Race War Won't be About Race 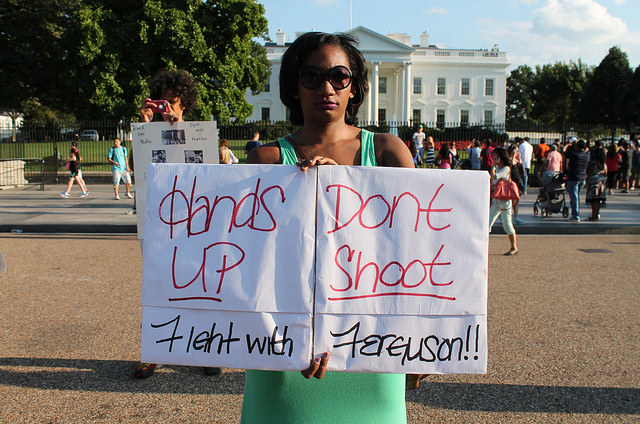 For the past week and a half eyes have been on Ferguson, MO, where in the wake of the shooting of Michael Brown protesters have been clashing with police forces. Brown, who was unarmed, has become the latest victim in a line of young black men who have been killed by police on questionable grounds. In response to protests by community members in Ferguson, police forces have been using rubber bullets and tear gas as well as military vehicles. Journalists have been arrested for on scene reporting, leaving their role to citizen journalists on social media to report first-hand what it's like to be in the midst of a tense situation and Constitutional nightmare.

Tensions in Ferguson are decades old with Brown's shooting being the last straw. The majority of Ferguson's population is black, and poor. Kareem Abdul-Jabbar, makes note of this, and the bigger economic picture in this piece he penned for Time. Abdul-Jabbar argues that poverty is the bigger issue we need to tackle, and that many of the issues that can intersectionally be under that umbrella (race, sexuality, gender rights) have been used to manipulate and distract the poor from their overall economic oppression through pitting the poor against one another. He notes we are aware of economic oppression, noting the recent popularity in Dystopian themed franchises like The Hunger Games, but do little to fight it as a whole.

There is no denying that poor vs. poor exists. The blue collar employee who makes a barely living wage sneering at a family on welfare being an everyday example. The largest example is the Tea Party movement, a movement of the economically oppressed acting as the social muscle of an organization orchestrated by mega-billionaires to meet their own personal interests. Progressives joke that they're just a group of racist, sexist, homophobes who get duped by Faux news all the time, but they're just as poor, if not more poor, than the rest of us.

The real question is if Abdul-Jabbar's call to action is possible? Can everyone living under economic disadvantage cast aside differences to stand against a common oppressor? Is that asking for too much in a nation where citizens are deeply impassioned by their social stances on issues? Is he ignoring the impact that issues such as race have on poverty?

Will the recent rioting in Ferguson, Missouri, be a tipping point in the struggle against racial injustice, or will it be a minor footnote in some future grad student’s thesis on Civil Unrest in the Early Twenty-First Century?

You probably have heard of the Kent State shootings: on May 4, 1970, the Ohio National Guard opened fire on student protesters at Kent State University. During those 13 seconds of gunfire, four students were killed and nine were wounded, one of whom was permanently paralyzed. The shock and outcry resulted in a nationwide strike of 4 million students that closed more than 450 campuses. Five days after the shooting, 100,000 protestors gathered in Washington, D.C. And the nation’s youth was energetically mobilized to end the Vietnam War, racism, sexism, and mindless faith in the political establishment.

You probably haven’t heard of the Jackson State shootings.

On May 14th, 10 days after Kent State ignited the nation, at the predominantly black Jackson State University in Mississippi, police killed two black students (one a high school senior, the other the father of an 18-month-old baby) with shotguns and wounded twelve others.

There was no national outcry. The nation was not mobilized to do anything. That heartless leviathan we call History swallowed that event whole, erasing it from the national memory.

And, unless we want the Ferguson atrocity to also be swallowed and become nothing more than an intestinal irritant to history, we have to address the situation not just as another act of systemic racism, but as what else it is: class warfare.

By focusing on just the racial aspect, the discussion becomes about whether Michael Brown’s death—or that of the other three unarmed black men who were killed by police in the U.S. within that month—is about discrimination or about police justification. Then we’ll argue about whether there isn’t just as much black-against-white racism in the U.S. as there is white-against-black. (Yes, there is. But, in general, white-against-black economically impacts the future of the black community. Black-against-white has almost no measurable social impact.)

Then we’ll start debating whether or not the police in America are themselves an endangered minority who are also discriminated against based on their color—blue. (Yes, they are. There are many factors to consider before condemning police, including political pressures, inadequate training, and arcane policies.) Then we’ll question whether blacks are more often shot because they more often commit crimes. (In fact, studies show that blacks are targeted more often in some cities, like New York City. It’s difficult to get a bigger national picture because studies are woefully inadequate. The Department of Justice study shows that in the U.S. between 2003 and 2009, among arrest-related deaths there’s very little difference among blacks, whites, or Latinos. However, the study doesn’t tell us how many were unarmed.)

This fist-shaking of everyone’s racial agenda distracts America from the larger issue that the targets of police overreaction are based less on skin color and more on an even worse Ebola-level affliction: being poor. Of course, to many in America, being a person of color is synonymous with being poor, and being poor is synonymous with being a criminal. Ironically, this misperception is true even among the poor.

And that’s how the status quo wants it.

The U.S. Census Report finds that 50 million Americans are poor. Fifty million voters is a powerful block if they ever organized in an effort to pursue their common economic goals. So, it’s crucial that those in the wealthiest One Percent keep the poor fractured by distracting them with emotional issues like immigration, abortion and gun control so they never stop to wonder how they got so screwed over for so long.

One way to keep these 50 million fractured is through disinformation. PunditFact’s recent scorecard on network news concluded that at Fox and Fox News Channel, 60 percent of claims are false. At NBC and MSNBC, 46 percent of claims were deemed false. That’s the “news,” folks! During the Ferguson riots, Fox News ran a black and white photo of Dr. Martin Luther King, Jr., with the bold caption: “Forgetting MLK’s Message/Protestors in Missouri Turn to Violence.” Did they run such a caption when either Presidents Bush invaded Iraq: “Forgetting Jesus Christ’s Message/U.S. Forgets to Turn Cheek and Kills Thousands”?

How can viewers make reasonable choices in a democracy if their sources of information are corrupted? They can’t, which is exactly how the One Percent controls the fate of the Ninety-Nine Percent.

Worse, certain politicians and entrepreneurs conspire to keep the poor just as they are. On his HBO comedic news show Last Week Tonight, John Oliver ran an expose of the payday loan business and those who so callously exploit the desperation of the poor. How does an industry that extorts up to 1,900 percent interest on loans get away with it? In Texas, State Rep. Gary Elkins blocked a regulatory bill, despite the fact that he owns a chain of payday loan stores. And the politician who kept badgering Elkins about his conflict of interest, Rep. Vicki Truitt, became a lobbyist for ACE Cash Express just 17 days after leaving office. In essence, Oliver showed how the poor are lured into such a loan, only to be unable to pay it back and having to secure yet another loan. The cycle shall be unbroken.

Dystopian books and movies like Snowpiercer, The Giver,Divergent, Hunger Games, and Elysium have been the rage for the past few years. Not just because they express teen frustration at authority figures. That would explain some of the popularity among younger audiences, but not among twentysomethings and even older adults. The real reason we flock to see Donald Sutherland’s porcelain portrayal in Hunger Games of a cold, ruthless president of the U.S. dedicated to preserving the rich while grinding his heel into the necks of the poor is that it rings true in a society in which the One Percent gets richer while our middle class is collapsing.

That’s not hyperbole; statistics prove this to be true. According to a 2012 Pew Research Center report, just half of U.S. households are middle-income, a drop of 11 percent since the 1970s; median middle-class income has dropped by 5 percent in the last ten years, total wealth is down 28 percent. Fewer people (just 23 percent) think they will have enough money to retire. Most damning of all: fewer Americans than ever believe in the American Dream mantra that hard work will get them ahead.

Rather than uniting to face the real foe—do-nothing politicians, legislators, and others in power—we fall into the trap of turning against each other, expending our energy battling our allies instead of our enemies. This isn’t just inclusive of race and political parties, it’s also about gender. In her book Unspeakable Things: Sex, Lies and Revolution, Laurie Penny suggests that the decreased career opportunities for young men in society makes them feel less valuable to females; as a result they deflect their rage from those who caused the problem to those who also suffer the consequences: females.

Yes, I’m aware that it is unfair to paint the wealthiest with such broad strokes. There are a number of super-rich people who are also super-supportive of their community. Humbled by their own success, they reach out to help others. But that’s not the case with the multitude of millionaires and billionaires who lobby to reduce Food Stamps, give no relief to the burden of student debt on our young, and kill extensions of unemployment benefits.

With each of these shootings/chokehold deaths/stand-your-ground atrocities, police and the judicial system are seen as enforcers of an unjust status quo. Our anger rises, and riots demanding justice ensue. The news channels interview everyone and pundits assign blame.

I’m not saying the protests in Ferguson aren’t justified—they are. In fact, we need more protests across the country. Where’s our Kent State? What will it take to mobilize 4 million students in peaceful protest? Because that’s what it will take to evoke actual change. The middle class has to join the poor and whites have to join African-Americans in mass demonstrations, in ousting corrupt politicians, in boycotting exploitative businesses, in passing legislation that promotes economic equality and opportunity, and in punishing those who gamble with our financial future.

Otherwise, all we’re going to get is what we got out of Ferguson: a bunch of politicians and celebrities expressing sympathy and outrage. If we don’t have a specific agenda—a list of exactly what we want to change and how—we will be gathering over and over again beside the dead bodies of our murdered children, parents, and neighbors.

I hope John Steinbeck is proven right when he wrote in Grapes of Wrath, “Repression works only to strengthen and knit the oppressed.” But I’m more inclined to echo Marvin Gaye’s “Inner City Blues,” written the year after the Kent State/Jackson State shootings:

Send that boy off to die

The way they do my life

The way they do my life