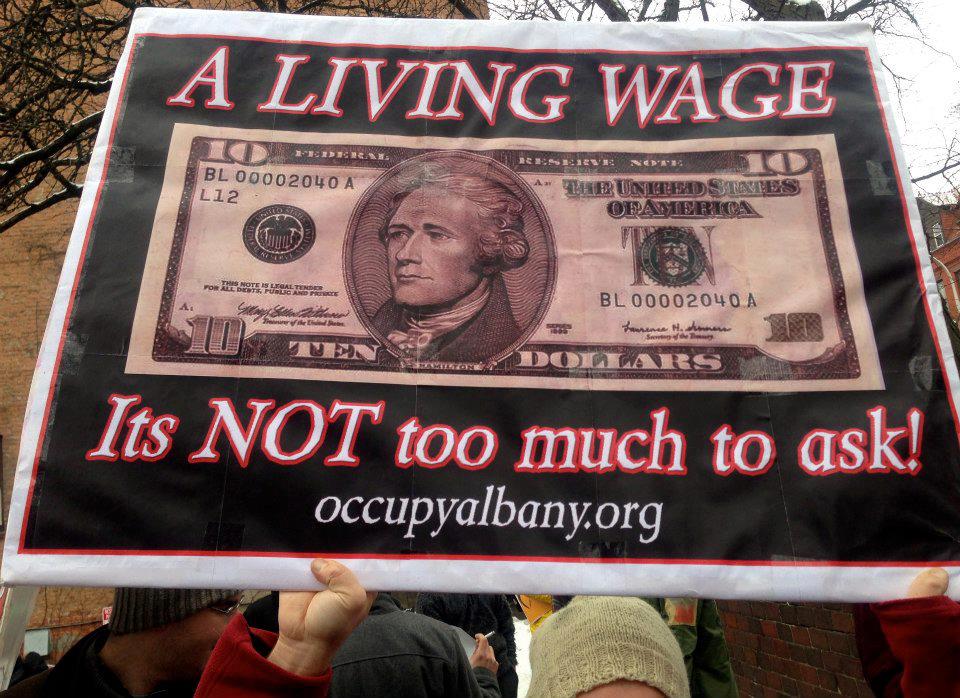 Panhanders are common in Rochester, we see them in the downtown, near highway exits into the city, and in some of our neighborhoods. This article by Evelyn Nieves, originally published in Alternet shows us the reality of panhandling. Not all panhandlers are homeless for instance. For many, it's a matter of what kind of income adequately provides for their families. Do you believe that panhandling should be brought up when we discuss income inequality?

Photo info: From the Raise the Wage Rally in Albany

Read more after the flip.

If there are secrets to successful begging, ways to stir people's souls, Brenda Johnson swears she doesn't know them.

You might think the sight of her--a woman in her 50s, sitting on a busted rollie bag, hunched from the pack on her back, inches from cars rolling off a freeway--would do the trick.

But no. Perched on a spit of grass at a bustling intersection in south San Jose, Johnson, as she wants to be called, in a threadbare brown kerchief, layers of sweaters and long black skirt, like an extra from Ken Burns’ Dustbowl series, had no luck at all for an hour and a half the other day. No one so much as tossed her a quarter. No one even smiled.

“It’s funny like that,” she said as cars whizzed by. Drivers who had to stop for a red light avoided eye contact. Johnson’s cardboard sign, "Please Help,” under her chest on her lap, made her point, but only one driver, a woman in a Ford Focus, came close. She looked through her purse, frowned, waved empty hands behind her windshield and mouthed: “Sorry.”

“I’ll try again later,” Johnson said, packing it in to head to a nearby encampment where she had been staying. “You never know.”

It's true. Spending time with people panhandling in San Jose and San Francisco, two cities where people asking for change on the streets and those who have it to spare literally bump shoulders, the only sure bet is that panhandling is unpredictable every which way.

The same person at the same spot, time and day of the week might "make" $50 in one hour, thanks to two generous $20 donations and a bunch of ones. Or they might have $5 after three hours. A grandmother, like 52-year-old Johnson, might get looks of sympathy and drivers rolling down their windows before she has time to reach them. Or, someone might roll down their windows to shame her, tell her to get a job, show some dignity.

There are panhandlers who need a fix and others who need a job or a hand. But all seem to get their share of scorn. Half a dozen people interviewed all had stories to tell about ways they endured the public’s wrath. Once, a young woman with others in the car asked Johnson to open her hand. When Johnson did, the woman spat in it and roared off, laughing.

Pranks happen routinely. Once, Johnson said, she was mooned. And she'd come to expect at least one middle finger a day.

"It's not half as fun as it sounds," she said with a droll smile. "I get a lot of cards about A.A." She smiled again. She doesn’t drink or do drugs anymore, she said. "A couple of times, I got a list of shelters."

Contrary to popular belief, panhandlers say they would rather work or do odd jobs than endure public scorn by begging. A barrel-chested young man in a wheelchair who said to call him "Bo," said that he was turned down for disability since he could work sit-down jobs like office temping, which he was in fact doing.

His being in a wheelchair didn't seem to soften the hard-charging drivers racing past him on an industrial street off Highway 101 in San Francisco. After an hour amid heavy, choking traffic, he had made $10, including one five dollar bill from someone who had meant to give him a single but could only find the five.

"Anyone who says I’d rather be doing this than something else is an effin' idiot," he said. Once, he said, he was knocked off his wheelchair and kicked around by two teenagers because one of them had heard a rumor that he could walk.

Although “Bo” was reticent to reveal much about himself, he meant it when he said he despised panhandling. He could not manage the "happy face" he said he needed to put on to gain sympathy with the public. Twice, he gave drivers the middle finger because he didn’t like the way they stared.

"How many happy people in wheelchairs begging on the streets are there?" he said. "The only thing that would make me happier is being homeless. That would be the kicker."

Johnson, the grandmother of two toddlers, said she became homeless when she decided to let her 19-year-old daughter have the $1,280-a-month disability checks she received for rheumatoid arthritis. Johnson said her daughter doesn't know she lost her apartment for late rent after her savings ran out, and she does not want her to know she is "outside" -- homeless and panhandling -- lest she refuse her mother's money. The two had had a falling out before Johnson became homeless. She said if she went to social services for help, she would have to reveal that she received disability checks but was giving them to her daughter, a single mother.

But on another "dry" day on the highway median, where one driver out of dozens had given her a dollar, Johnson said she was feeling tired. "I'm going to call it a day," she said. "And I'm going to pretend I'm having a nice cold 40."

Oh, she added. "That's another secret you can tell people. Some people don't start begging because they drink. Some people, they start drinking ‘cause they beg."