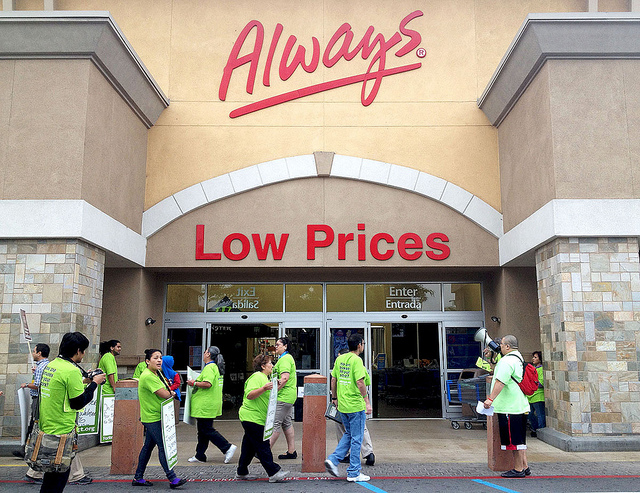 The Fight For $15 movement is growing, and Walmart is the latest minimum wage employer to feel the pressure. Last week major protests were held demanding a $15 an hour minimum wage. Walmart is the largest employer in the U.S., and OUR Walmart is one of the first organizations to spring up in today's labor rights movement.

Last week's protests were held in major cities (and outside the homes of Walton family members) demanding that Walmart raise their wages and provide benefits. This is something we've been active with in the fast food industry. Michelle Chen's article in The Nation takes a closer look at the movement, as well as the economic impact Walmart has on workers and taxpayers alike.

A higher minimum wage won't help every household, but it's a start, and the benefits will lift countless people out of poverty and ease social services. You can volunteer and support our own Fight for $15 movement if you want to help. If you have any thoughts on minimum wage, minimum wage employers, or how to help further our campaign for a $15 minimum wage please share in the comments.

For a moment last week, it looked like Walmart CEOs were getting enlightened. The company promised to “end minimum-wage pay” for its lowest-paid sales workers and touted a plan to ‘”invest in its associate base” and maybe even offer more bonus opportunities. But though these moves might help the several thousand associates earning the absolute legal minimum of $7.25 an hour, the real problem is that hundreds of thousands of Walmart workers earn just above that level and still struggle to survive (the average sales associate’s hourly wage is just under $9). In addition to poverty wages, workers have suffered cuts to benefits and exhausting, erratic schedules.

On Wednesday and Thursday, Walmart workers once again voiced their demands for decent work with demonstrations and civil disobedience in New York City; Washington, DC; and Phoenix. They delivered a petition demanding better working conditions, now signed by Walmart workers at more than 1,600 stores nationwide, to the homes of members of the Walton dynasty and the offices of their foundation.

The actions were part of a string of protests that have drawn public attention to the dirty laborpractices behind Walmart’s consumer-friendly veneer. The OUR Walmart campaign has tackled not just low wages but also the computerized scheduling systems that wreak havoc on workers’ lives. Working mothers suffer from rigid schedules and low pay scales that make it near impossible to support a family. The company’s recent move to slash health benefits for about 30,000 part-timers—following a growing trend among big retailers—effectively dumps more of the healthcare costs of struggling workers onto Obamacare. Many associates must supplement low wages with welfare benefits, adding up to billions of dollars a year for food stamps and other public assistance. Walmart meanwhile sponges off the low-wage economy’s perverse circularity: welfare benefits for impoverished employees amount to an indirect government subsidy for the company; its stores serve as a major grocery retailer for benefits recipients; and about $1 billion annually in federal tax breaks have flowed into its coffers.

The activists have made a few inroads: they have pushed for better accommodations for pregnant workers and advanced a legal challenge charging retaliation against strikers. But these campaigns often seem like a game of whack-a-mole, as the retail giant develops ever more elaborate ways to avoid paying workers a living wage. So activists are branding their campaign with a single demand for a real “investment in its associate base”: full-time work, at $15 an hour.

A full-time job with steady pay would be a major boost for the majority of Walmart’s US workers, who now earn less than $25,000, often working less than thirty hours per week despite being primary household wage earners.

And the demand for $15 an hour aligns Walmart workers’ demands with that of many other low-wage workers’ campaigns, including the fast-food worker movement, homecare workers and community advocates seeking to set $15 as the target minimum wage in various cities. Fifteen isn’t a magic number, of course—it still would leave even many full-time workers struggling to cover basic needs, but it would help stabilize thousands of households and have may have a ripple effect across the retail sector. According to an analysis by Demos, providing a base wage of “$25,000 per year for a full-time, year-round retail worker at retail companies employing at least 1,000 workers” would amount to a pay raise of more than 25 percent for the women who typically earn less than that threshold. Although pro-business groups demonize the idea of a minimum wage hike a “job killer” that mostly affects teens, the Demos analysis projects an overall benefit for “3.2 million female retail workers and their families in addition to 2.5 million male retail workers and their families.”

At the protest in Arizona, Walmart worker Evelin Cruz gave a pat response to a Fox reporter’s question about whether she had tried to seek a better paying job: “Why should we?… Walmart sets the standards for a lot of other places, like Target. Why should we not make a change for a better workplace, that can change and help the economy?”

Now, $15 is still chump change compared to the approximately $6,900 per hour rate of a Walmart CEO. But after years of striking and marching just to get Walmart to pay people enough to survive, clinching that symbolic $15 benchmark would send a message to low-wage workers everywhere that while ordinary workers may not be able to dismantle the big box business model, they can lead a movement to raise the floor.