Fight for 15 Day of Action 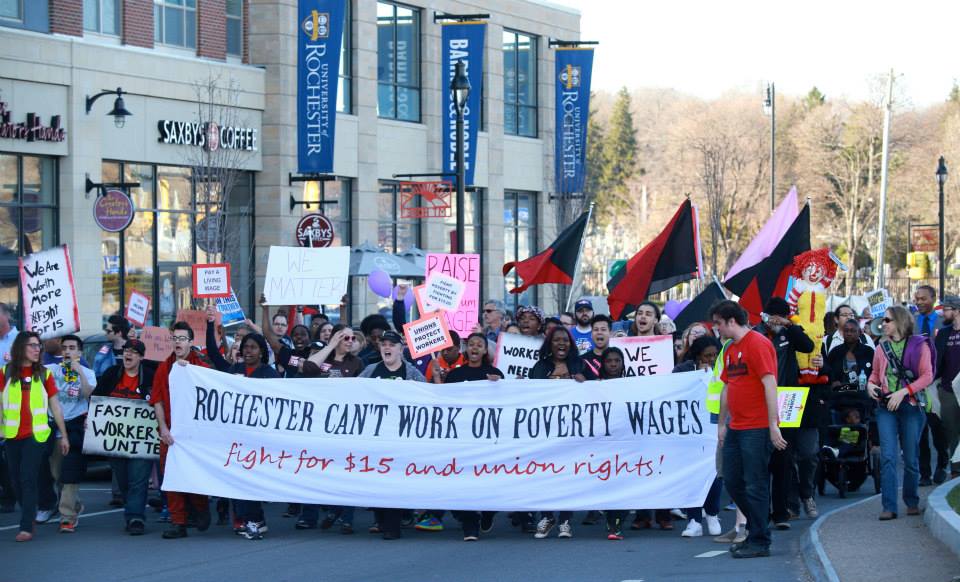 There are 64 million people working in the United States who are making less than $15 per hour. It's about time poverty wages be a thing of the past.

Luckily for us a powerful movement has emerged all throughout our country demanding $15 an hour and union rights for all working people. We're done working full time and living in poverty, we're done choosing between rent and groceries, and we're done making companies like McDonald's billions of dollars while we barely scrape by. We're taking to the streets and taking bold, public actions to show that we can't be ignored.

Fast food workers are continuing to take the lead by going on strike throughout the country! There will be fast food strikes in over 300 cities across the United States. It's this militant worker leadership and willingness to strike that has led to millions of workers across the country winning raises in their minimum wages. Workers in retail, education, health care, farmworkers, restaurants and many other are joining this growing movement. April 14th is when we'll show the strength we've built together!

Mass March and Rally for $15

The Day of Action will be capped off with a rally of all those involved in the Fight for 15 locally, and a march to a nearby poverty-wage employer. Hundreds will gather with us and take part in this powerful march. Don't miss this action!

WHERE: Washington Square Park
WHEN: Thursday, April 14th, 5pm. We will march at 5:20pm.

The Day of Action will begin early in the morning. We will gather to picket a local McDonald's at breakfast hour. We need to start the day off right with a press conference during the breakfast hour.

On September 4th, 2014 the Fight for 15 came to Rochester when workers at the Wendy's on East Ridge Road become the first upstate fast food workers in New York to go on strike. They're still a key part of the Fight for 15 in Rochester, and a recent change in management of their store has meant some major changes that they've not been consulted on. They want us to join them while they demand a voice at work!