[To learn about this campaign and get involved, sign our petition for a public utility and community-owned renewable energy in Rochester! Then, our Lead Organizer, Mohini Sharma, will follow up with you! You can also visit our upcoming events page to RSVP to an upcoming RED Organizing Meeting; we meet biweekly on Wednesdays from 5:30-7:30 PM.]

Why do we need public power? The climate crisis and expensive utilities bills.

One of the greatest threats to both the progress and survival of human civilization is the acceleration and destruction of climate change. We as a society have become accustomed to flooding, droughts, extreme and unpredictable weather, sea levels rising, and mass extinctions. The human race as a whole has about ten years to reverse and counteract these events; the ongoing effects of climate change will cause international and intranational migration that disproportionately harms people of color and poor people.

While we are currently existing in this crisis, investor-owned for-profit utilities like RG&E charge extortionate rates to deliver heat and electricity to our homes while profiting as much as 700 million dollars a year. RG&E uses these rates we pay them to purchase dangerous and deadly CO2-emitting energy sources -- the main cause of climate change and one of the greatest accelerants to our demise. The result? Hundreds of people in Rochester struggle to afford their energy bills, suffer through winter shut-offs, go into crushing debt dealing with late fees on energy bills they couldn’t afford to pay in the first place, and pay for dirty energy that jeopardizes our future. Heat and electricity are human needs and should be provided as a public good, not exploited for corporate profit.

The climate crisis and unaffordability of energy are two connected problems with the same root cause: an energy economy owned and operated by private industries who prioritize profits over the long-term well-being of our environment and people.

Our solution: public power & energy democracy. RG&E has got to go!

What we need is a radical transformation of every affected sector of our economy that looks to workers, communities of color, indigenous communities and poor communities for leadership in creating a society that is both just and sustainable for all. We need to build an energy system that meets the needs of communities instead of the greed of distant investors and CEOs. We need a shift to energy that is 100% clean and renewable.

This future is possible if we create an energy economy both owned and operated by the community itself. In other words, we need public power and energy democracy, that gives communities a say in what kind of energy we use, whom we get it from, and how the money we pay is used to benefit our community. Everyone could only pay what is necessary to develop and maintain energy infrastructure, taking millions in profits for investors and CEOs out of the picture, and preserving our future on this one earth.

We believe the first steps towards this vision on a local scale is replacing RG&E with a public, locally and democratically owned and governed utility, and organizing our neighborhoods for community-owned solar farms. This makes possible an affordable green transition for healthy, sustainable, and democratic communities in the long-term while lowering energy bills and eliminating the private aspect to a public utility. Labor provided for such a task will also fall first to unionized workers and empowered laborers instead of those exploited by the ruling class.

We are also a founding member of the statewide Public Power NY Coalition. Together with organizations across the state, we are fighting to pass two public power bills that will bring both energy generation, and all investor-owned distribution utilities, under public control. These two bills are called the NY Build Public Renewables Act (NYBPRA) and NY Utility Democracy Act (NYUDA). You can visit the Public Power NY Coalition website to learn more! Lastly, Metro Justice is also a proud member of the NY Energy Democracy Alliance. Our membership allows us to coordinate with, support, and learn from organizations across NYS doing climate and energy justice work that is consistent with our values. You can learn more about the Energy Democracy Alliance's work in energy efficiency, community owned renewables, and public power by visiting their website!

Our progress: a vision and movement by the people! 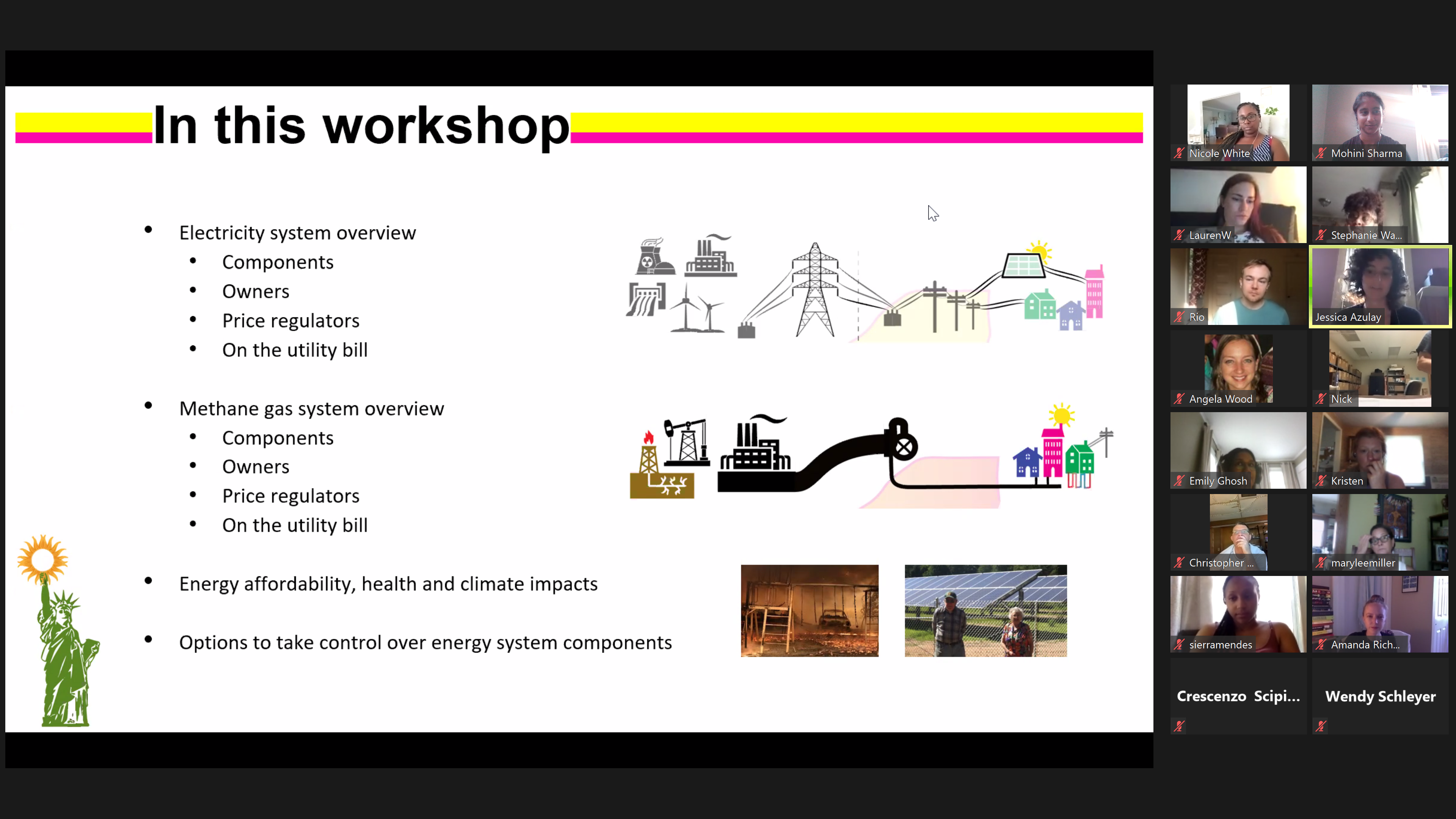 One year after beginning our campaign, we have grown to a diverse and dedicated team of nearly twenty volunteers, and our intent is to keep growing so that we have the public, people-controlled power we need to succeed! We rise and fight for a democratic, public, and locally owned utility based on four principles of Energy Democracy:

When we fight, we can win! Let’s get to work together for a future that serves us, not the top.