Metro Justice and its allies won some key victories in June! June was also a month of immense growth. Read on to learn more about the key milestones our campaigns reached and the new alliances with organizations we solidified. 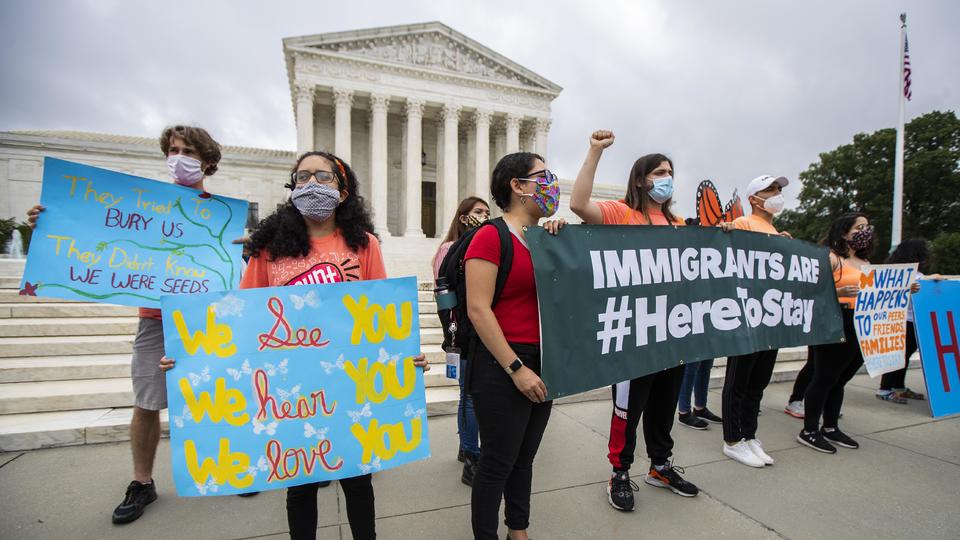 First, RRRN would like to recognize a victory for immigrant rights in the U.S. The Supreme Court upheld DACA (Deferred Action for Childhood Arrivals), solidifying protections for undocumented people who meet the qualifications for protection against deportation! President Donald Trump attempted to strip away this crucial protection, but this past month the Supreme Court ruled 5-4 that his move was unconstitutional. It is important to celebrate every victory!

Also this past month, RRRN volunteers moved one of the families we support into a new home, and gathered appliance donations from community members. The mother and her daughter are now in a permanent home, and they have access to the funds that were raised for them last month.

Lastly, RRRN reached our fundraising goal of $5,135 for the elderly mother and her adult son's living expenses as they try to get back on their feet during this tumultuous time.

RRRN has several working groups that meet between general meetings; these working groups anchor critical work including immigrant family court support, communications & media, campaign planning & strategy, and membership recruitment & development. RRRN is in particular need of someone to fill the role of Treasurer on their Steering Committee. To learn more or join a working group, email RRRN at [email protected]!

R.E.D. is a campaign started by Metro Justice to halt the pending climate catastrophe and ensure environmental justice in the long-term. We are striving to build an energy system in which communities -- not corporate investors -- decide what energy we use, where we get it, what we pay, and how that money can be used to benefit our community. The first steps towards this vision is organizing our neighborhoods for community-owned solar and replacing RG&E with a public, not-for-profit, cooperatively owned utility with an elected board, a green energy mandate, and concrete commitments to a just transition for energy workers. 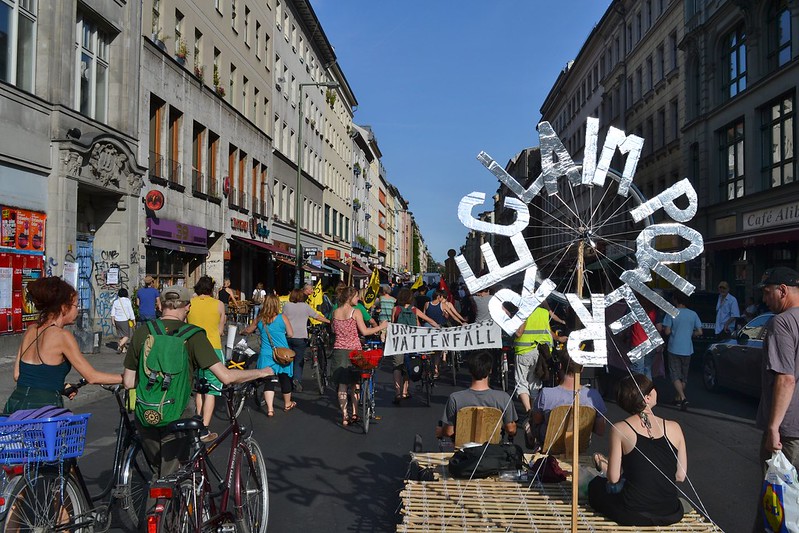 This past month, we also experienced a lot of new sign-ups from people that would like to join our movement! We are really encouraged that so many people want to get involved because a community driven energy system needs participation from the community to succeed! That is why the R.E.D. Committee welcomes you to the campaign with a virtual orientation and workshop! This orientation is on Wednesday, July 8th from 5:30-7:30 PM and will occur via Zoom. Details on how to join the online Zoom conference will be sent to you after you RSVP. You must RSVP so that we can send you all the information you need to join. You can learn more about the orientation and RSVP by clicking the button below!

Do you want to join us in halting the climate crisis and making energy a human right? Sign our petition here! 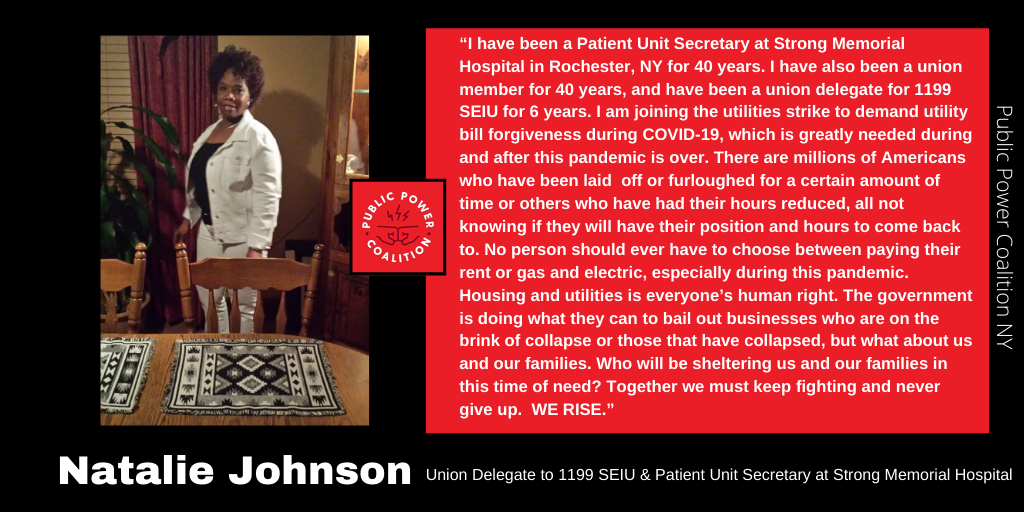 In May, the Public Power NY Coalition publicly launched a Statewide Utilities Ratepayer Strike to demand comprehensive utility bill relief due to COVID-19. Only a few weeks after in June, we won our first victory!

A couple of the most notable victories are that:
- The previously voluntary moratorium on shut offs is now MANDATORY for public and private utilities, including: electric, gas, water-works corporations, and telephone corporations.
- The moratorium will be in effect for the duration of the COVID-19 State of Emergency, and will remain in effect for 6 months after Governor Cuomo declares an end to the state of emergency.

This victory shows us that we can and must win more if we take action together. We still have to address debt forgiveness and further protections during the recovery period from COVID, so we are going to keep fighting for ALL of our demands to be met! Whether you're struggling to pay utilities, or can afford utilities but are interested in withholding payment in solidarity with our demands, you can learn more and join the strike by clicking here! 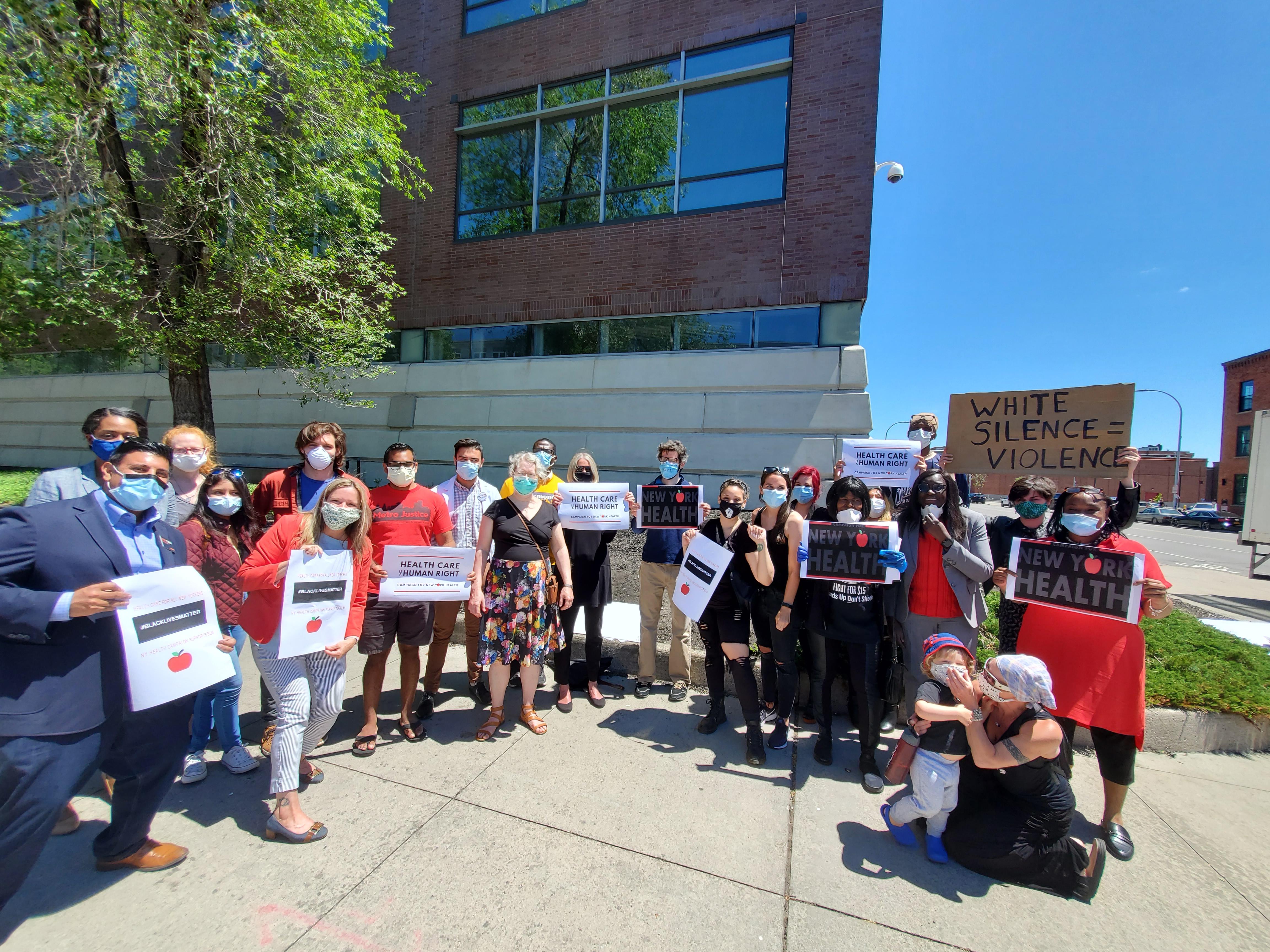 The major event for Rochester for NY Health during June was an outdoor press conference and rally held jointly with the Rochester City-Wide Tenant Union. The press conference called for the passage of the New York Health Act and the New York Homes Guarantee. Speakers at the rally brought out how housing and health interact: one speaker described how her apartment in Manhattan Square has both black mold (due to poorly constructed windows) and asbestos, which the city has chosen to abate while residents are still living in the building. Her son lacks health insurance, so there is no way to tell whether the health problems he is suffering are due to the asbestos, the mold, or the chemicals used to treat them. Another speaker described the health effects brought about by the continuing stress of eviction threats. Six local candidates (Sarah Clarke, Jeremy Cooney, Demond Meeks, Kim Smith, Robin Wilt, and Samra Brouk) who have supported both the NY Health Act and the Homes Guarantee also spoke. The event was covered by WHAM news  and the Democrat and Chronicle.

Moving on from this rally, Rochester for NY Health is looking to increase participation, leading toward pressuring the state legislature to pass the New York Health Act which is even more urgently needed in the midst of a pandemic as so many New Yorkers are losing employer-based health care. During this coming month, be on the lookout for emails or texts as we poll people who have expressed interest in health care in the past. If you are ready to get involved right now, check us out on our Facebook page. We also have monthly organizing meetings, now held over zoom. Message us on Facebook for the Zoom link or RSVP here on our website for the next meeting, which will be held at 6 pm on Wednesday, July 29th! 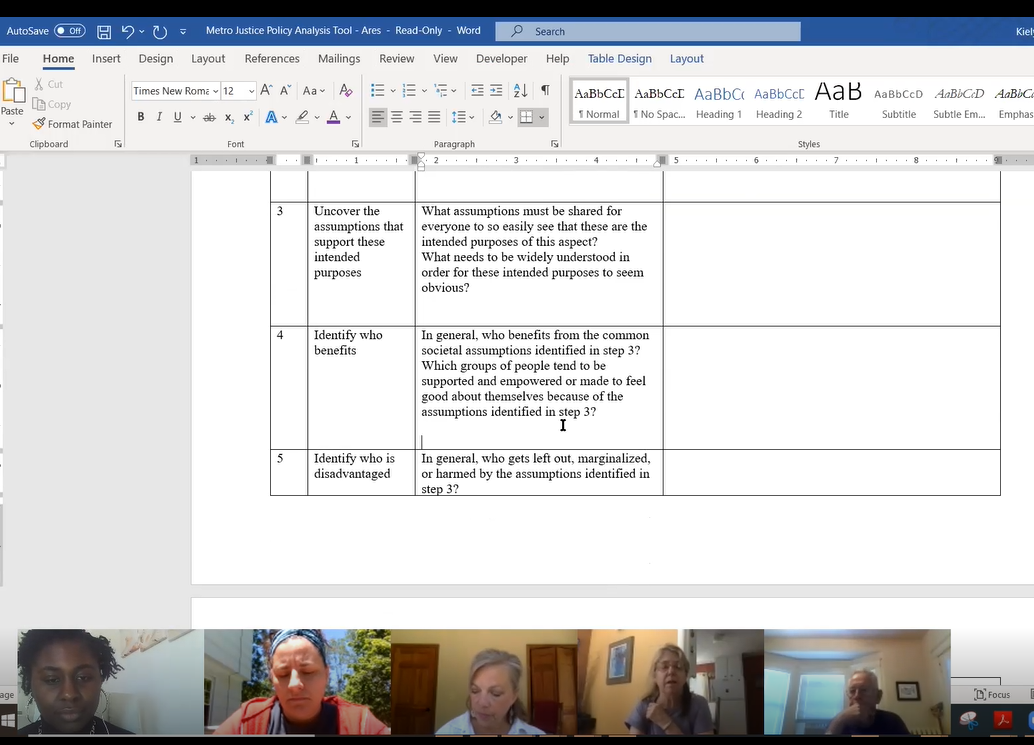 The Popular Education Committee has continued their work to design their first workshop in the "Dismantling White Supremacy" series. We are in the midst of reaching out to community members to ask if they would like to lend their knowledge or time in developing the workshop or attending the pilot. This is a good way for Metro Justice to build relationships with other organizations in the community based on common interests.
The above screenshot is from one of our June meetings, in which committee members are engaged in policy analysis, which will be a key part in the learning process when attending the workshop.

If you are interested in being part of this initiative, please reach out to Nicole White at [email protected].

Elder Justice Committee (EJC) is one of our longest existing committees with some of our most dedicated members. Over the years, Elder Justice has gained statewide recognition for their work to ensure that elders live purposeful, self-directed, meaningful, and dignified lives in their homes and communities. A critical focus of this work has been transforming our nursing homes from hospital-like holding institutions into meaningful and nurturing homes where elders can continue to live truly fulfilling lives. A linchpin of this effort is winning the Safe Staffing for Quality Care Act.

The Elder Justice Committee followed up on our May 18th Opinion Column published in the May 18th Democrat & Chronicle by sending letters and contacting key NYS legislative leaders, Governor Cuomo, Chairs of the Assembly Health and Aging committees, and Senate Finance and Health Committees. Our letters urged them to take immediate actions to address not only the causes of the horrendous number of NYS nursing home residents’ deaths (5400 in mid-May and now over 6200), but also the long-term systemic issues of inadequate nursing staffing and lax NYS Department of Health enforcement of regulations.

We have also called for allowing the safe and controlled resumption of family member visits to residents for those family members that play a necessary role in the care of their loved ones. We’ve also joined others in calling for the readmission of trained volunteer nursing home Ombudspersons assigned to specific nursing homes and to adult care facilities. Residents are still being isolated from these people who are frequently responsible for both their physical wellbeing and mental health.  Finally, we attended meetings of two elder advocate organizations, the Long Term Care Community Coalition -- of which we are an organizational member -- and the New York Statewide Senior Action Council, to learn about and discuss common strategies to address these issues.

If you want to join the movement to ensure that our elders have the dignified and safe lives they deserve, email [email protected] for information on upcoming activities! 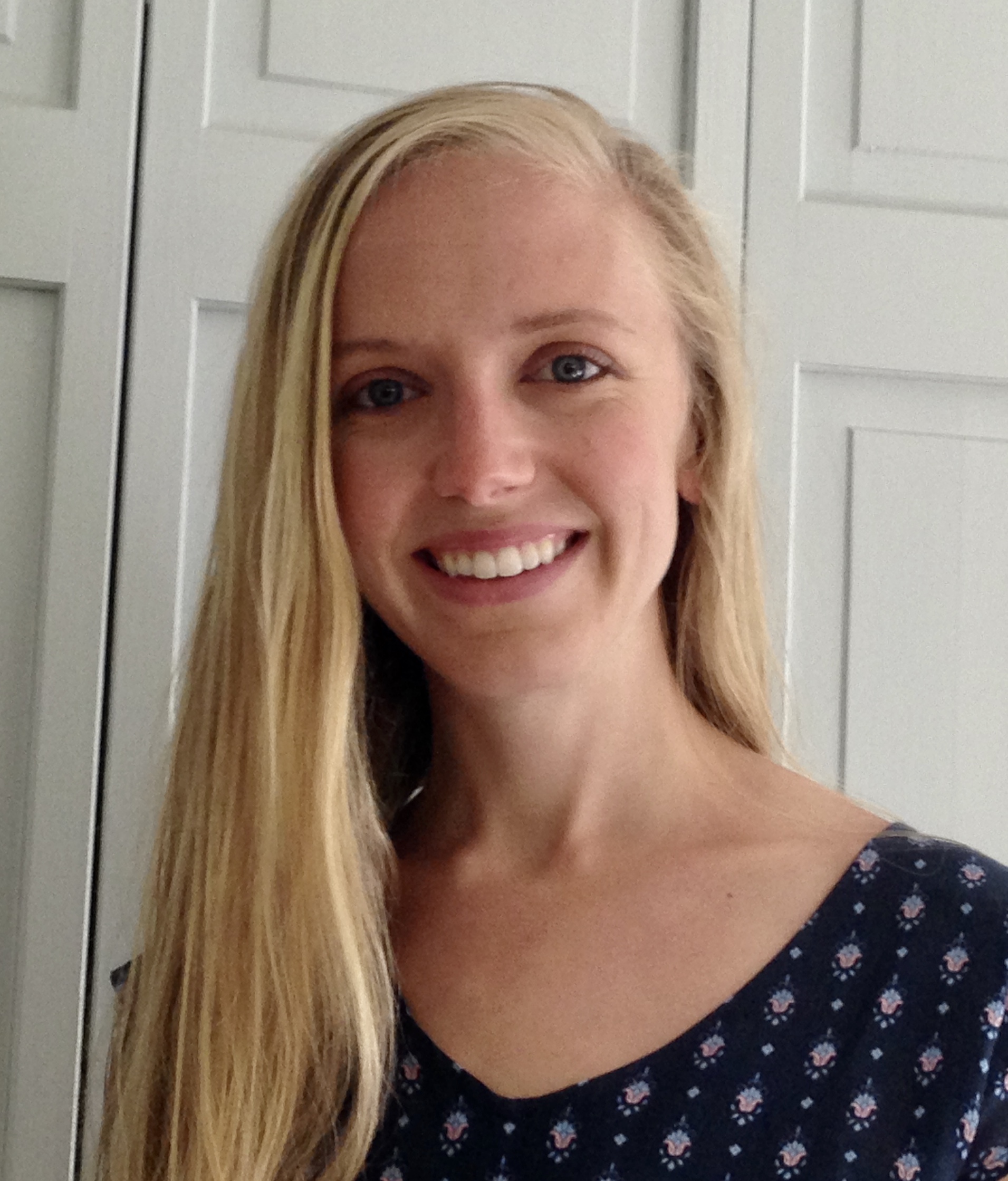 My name is Amanda Richardson. I’m the Development Director at Flower City Pickers, a local food rescue organization, and I serve as Co-chair of the Rochester for Energy Democracy (RED) campaign at Metro Justice. Not long after moving to Rochester last August, I attended a Metro Justice event where the RED campaign was presented. I was inspired to see a plan that targeted transitioning to renewable energy while centering social justice – acknowledging that those who are most adversely affected by climate change are people of color, indigenous people, and poor people. I wanted to join the fight for a public utility that was committed to a democratic governance structure and a just transition for energy workers. I attended the next RED meeting and soon went on my first canvass, did my first phone bank, and attended a retreat with the Energy Democracy Alliance, a statewide coalition of organizations focused on environmental justice.

So much has happened since this campaign began. The past few months have brought endless tragedy and anger, but it has also triggered a shift that has allowed much of society to recognize that everything can and needs to change – especially the broken systems and institutions all around us. Corporate shareholders don’t need to continue to make millions in profits off of our need for heat and electricity. We can create a public utility that’s accountable to the ratepayers and reinvests in the community. That RG&E has continued to distribute shut off notices during a global pandemic, while there is a state-mandated moratorium on shut offs, has made their predatory practices to secure their bottom line clear. I encourage anyone who is not yet striking to join us in demanding utility bill cancellation from the start of the pandemic, a two-year moratorium on shut offs, and taxing the rich to pay for their share of the recovery.

The past year has been a heavy one in so many ways. Finding an organization like Metro Justice that’s committed to having difficult conversations and making change has allowed me to find community, get to know Rochester, and dive into the work. And there is so much work to be done.

Metro Justice is a grassroots community organization, driven by our members. Much of this work would not be possible without the contributions of both time and money by the hundreds of members who work hard everyday fighting for racial, social, and economic justice. The contributions of our members are what allow us to forgo big grant funding so that we can be solely accountable to our community instead of large foundations.

Not a member yet? Make it official!

Are you already a member, but want to make an additional donation to support our work?

Wishing you, your friends, and loved ones health, safety, and support.