5 Ways Being Poor is a Crime 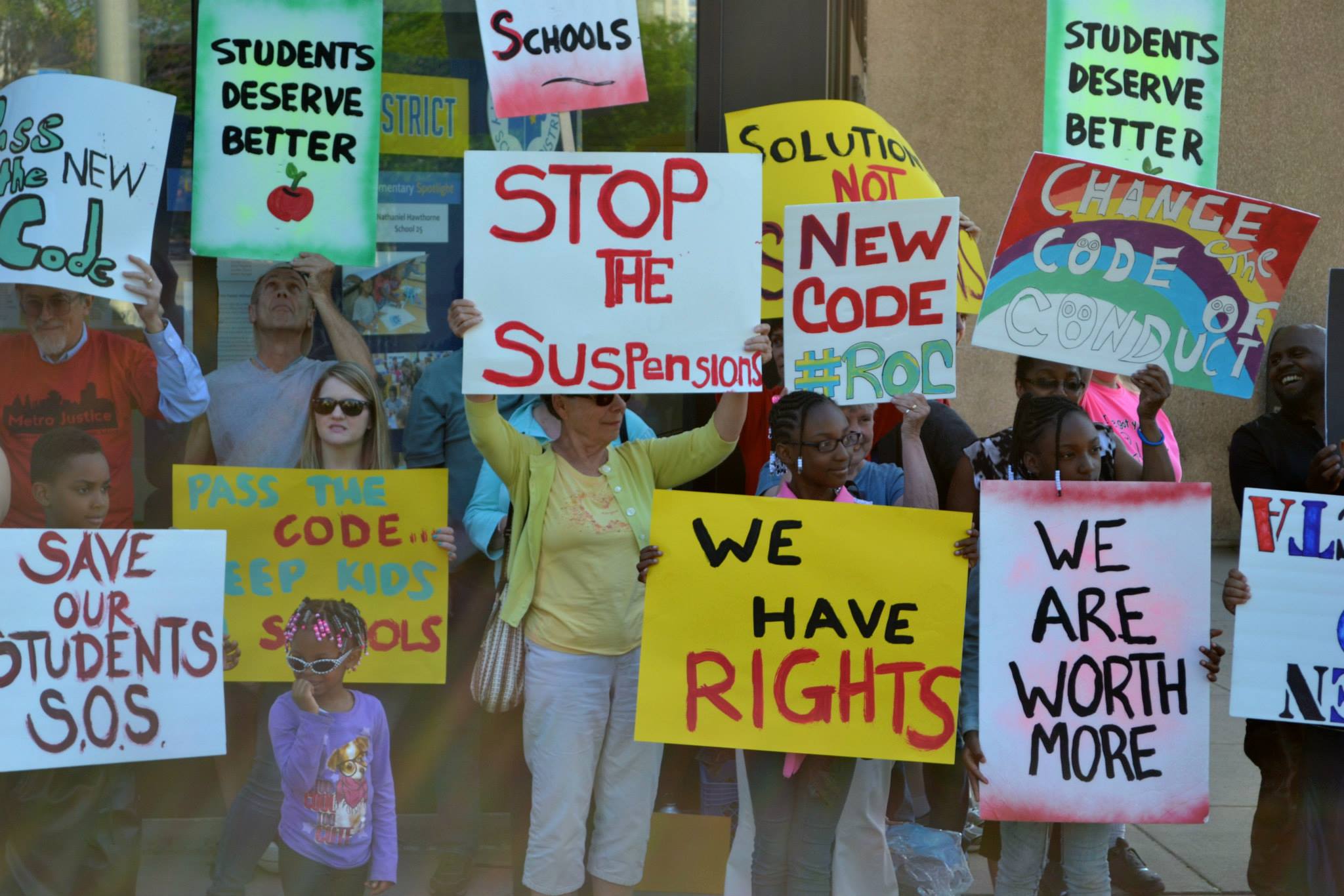 In the United States being poor is a crime. While you can't be arrested simply for being below a certain income bracket, you can face challenges in employment, legal bias for minor infractions, or face greater scrutiny based on the neighborhood you live in. Many of the  things on this list are things we are familiar with and actively fight against, like the school to prison pipeline and poverty wages. Others are a matter of helping citizens know their rights, like laws that protect citizens from being jailed for debt. Terrell Jermaine Starr's article for Inequality.org, originally published on Alternet, "5 Ways Being Poor is a Crime" outlines just how poverty is used against those suffering under it.

Another thing of note is how much race is intertwined in these reasons, as Starr puts it, this is a both/and issue. Systematic racism is the leading cause of systematic poverty, but doesn't have to be present for poverty to be used against someone. Black and latino people face greater scrutiny in schools, and traffic stops, but anyone who lives in a neighborhood with "broken window" policing policies is at equal opportunity for petty arrest. Students with disabilities are also likely to fall into the school to prison pipeline regardless of race.

Intersectional approaches are the best way to tackle issues such as poverty. It is key we see racial justice as a part of economic justice due to the number of people who fall into both categories of social disadvantage. Lifting up one group will help lift up the other. There are many ways you can help the fight locally, whether you approach the school board about changing the discipline policy, or join us in the Fight for $15 movement, or even educating people on their rights in the case of legal problems, there are ways you can help!

(Photo from our rally at the Board of Education urging a new, reformative discipline policy.)

The criminalization of America’s poor has been quietly gaining steam for years, but a recent study, “The Poor Get Prison” co-authored by Karen Dolan and Jodi L. Carr, reveals the startling extent to which American municipalities are fining and jailing the country’s most vulnerable people, not just punishing them for being poor, but driving them deeper into poverty. “In the last ten years,” Barbara Ehrenreich writes in the introduction, “it has become apparent that being poor is in itself a crime in many cities and counties, and that it is a crime punished by further impoverishment.”

A few months ago, the Department of Justice’s Ferguson report revealed how that city has disproportionately targeted its majority minority population with traffic and other minor infractions that heavily support the municipality’s coffers. But Ferguson is far from alone. Municipalities like New York City have greatly increased the number of minor offenses that are considered criminal (like putting your feet up in the subway) or sitting on the sidewalk. Wealthy white people in business attire are rarely targeted for such summonses, and if they are, they can quickly pay the fine or hire counsel to get out of it. The over-punishment of minor offenses is just another way the rich get richer, and as the report says, the “poor get prison.” They also get poorer and more numerous. In one striking statistic, the Southern Educational Foundation reports that 51 percent of America’s public schoolchildren are living in poverty.

Perversely, it is the poor who, according to Dolan and Carr, are subsidizing municipalities’ budgets and becoming reliable sources of enrichment for the private companies contracted by local governments to carry out what used to be government duties.

Here are five troubling trends from the report that show us how the government is financially abusing poor people.

1. Jailing probationers who can’t pay fees and fines. More than four million people are sentenced to probation in America, according to the report. Because state funding for probation services is on the decline, more private companies are talking over the responsibility of managing them. Private probation companies don’t charge local governments for their services, so there is no fee to the taxpayer. Probationers, however, are charged a supervision fee, and if they can’t afford to pay, they face jail time. Despite the fact that it is unconstitutional to jail people because they can’t pay fines, the reality is that many probationers are poor and unaware of their rights and they end up in modern-day debtors’ prisons.

“While indigent people have a right to free counsel in some cases, more municipalities are requiring an ‘application fee’ of at least $50 to pay for a public defender,” Karen Dolan, a co-author of the study, told AlterNet via email. “Many poor people with misdemeanor charges end up before a judge without legal representation and do not understand their rights. Without legal representation, poor people often don’t understand that they ought not to be offered ‘jail or probation’ simply for debt, and they choose probation. They unwittingly enter into a potential dungeon of debt due to the huge fees charged by private probation companies and inability to pay those eventually—illegally—leads to jail anyway.”

2. Taking poor people’s property through asset forfeit seizures. More than $3 billion in cash and property has been seized by local and state police agencies through a Department of Justice asset seizure program. Eighty percent of the assets collected through this program stay with the law enforcement agencies that collect them, the Washington Post reported. Under asset forfeit seizure programs, cops can take someone’s property simply under “reasonable suspicion” it was used to commit a crime; the burden of proof is on the property owner that the seizure was unjustified.

Dolan and Carr’s report outlines how this program disproportionately impacts the poor, especially black and Latino people. Given that black and Latino working families are twice as likely as whites to be low-income, they are less likely to have the financial resources to reclaim property that was, in many cases, wrongfully taken from them.

3. School-to-prison pipeline. Black students make up just 16 percent of the population but represent 32-42 percent of students who are suspended or expelled, according to the “The Poor Get Prison” report. Many school districts around the country use local police to provide security, which further increases these students’ chances of arrest.

“When you have zero tolerance policies, combined with law enforcement officers at the doors and in the hallways and you have a poor and black student body—both demographics considered potential criminals from the time they board the bus in the morning—you have the makings of unnecessarily harsh and punitive actions against black students,” Dolan told AlterNet.

“Studies show that students with disabilities are also disproportionately affected by overly harsh punishments at school,” she continued. “The two overriding factors appear to be class and race. Poverty plays a big role, but overlaying that is what seems only explainable by a widespread cultural bias against black youth, especially black male youth, even small children who are black and poor. The presumption that black schoolchildren are potential criminals seems to play into the disparity in the levels and severity of discipline when you compare them with white schoolchildren.”

As previous studies have shown, people with arrest records find it difficult to find employment. A 2013 National Institute of Justice report cited a study that was carried out in New York City that found people with a criminal record are 50 percent less likely to get a call back for a job interview; most of those affected are black.

What this tells us is that the criminalization of poor black and Latino children through hyper-disciplinary actions doesn’t end at the schoolhouse door. It is a poverty-inducing policy that harms these kids’ employability prospects later in life.

4. Hyper criminalization of petty infractions. The New York City Council is considering proposals to make petty crimes like peeing in public and drinking from an open container civil instead of criminal offenses. This follows years of hyper-policing and criminalizing an increasing list of tiny infractions.

Since 2001, 81 percent of the people fined and punished under these “broken windows” policing policies have been Latinos or black Americans, many them from the city’s poorest communities.

New York is not alone in its enforcement of petty violations. In Ferguson, for example, revenue from its police department enforcing municipal codes were expected to account for 23 percent of the city’s budget or more than $3 million. In 2013, that figure was $2.46 million.

Loistine Hoskin, a resident of Ferguson, told CNN that her car was towed in 2009 because it was missing a tire. She chose to pay a $1,200 fine rather than try to fight the ticket in court and face the threat of jail, she said.

“It’s definitely a vicious cycle,” Hoskin, 64, a retired airline reservation agent, told CNN. “Unfortunately for most people who are in this cycle, they continue to be in a downward spiral because they can’t get jobs, they can’t do anything, they can’t pay the fines.”

5. Fining the homeless for being homeless. If you are homeless in America and have nowhere to go and are down on your luck, it is increasingly difficult to find a safe space in which to exist without being fined for loitering. According to the report, an estimated 600,000 people are homeless on any given night. Though nearly 13 percent of the nation’s low-income housing has been lost since 2001, and many people simply cannot afford housing, 34 percent of cities ban public camping, 18 percent prohibit sleeping in public and 43 percent prevent people from sleeping in vehicles, according to a study the report cited.

Often, homeless people who are fined for violating these laws have no way to pay the fine. Jailtime is on the table for many who can’t pay up.

One example of how economically devastating these fines are comes out of Missouri. Edward Brown, 62 and homeless, has been jailed at least twice since 2009 for failing to pay fines, one of which stems from his failure to get a rabies vaccination for his dog, Matrix. He was ticketed $464 and just barely paid it off. Brown’s monthly Social Security check is $484.

The report offers suggestions for addressing some of these issues. Whether those in power will listen to the solutions is another matter.

When asked whether race or poverty was the factor driving the criminalization of the poor, Dolan said the two are intertwined.

“I don’t think we can separate the two,” she said. “It’s not an either/or. It’s a both/and. There’s no question that poor people of all races are vastly more impacted by fines, fees, aggressive policing and more vulnerable in court than people with the ability to pay misdemeanor charges and afford legal representation. And there is no question that the mandate for police and court systems to fill in budget deficits by aggressive collection of these fines are more prevalent in lower-income areas, regardless of race.

“But there is equally no question that racial profiling has been ever-present in our country despite civil rights laws designed to address such bias and discrimination. And black people are disproportionately poor and disproportionately policed and incarcerated in this country. Police and courts in low-income/high poverty areas are increasingly in the service of aggressive money collection rather than public safety. When racist bias is added to this already fraught situation, the match is thrown on this tinderbox and consequences can be deadly.”