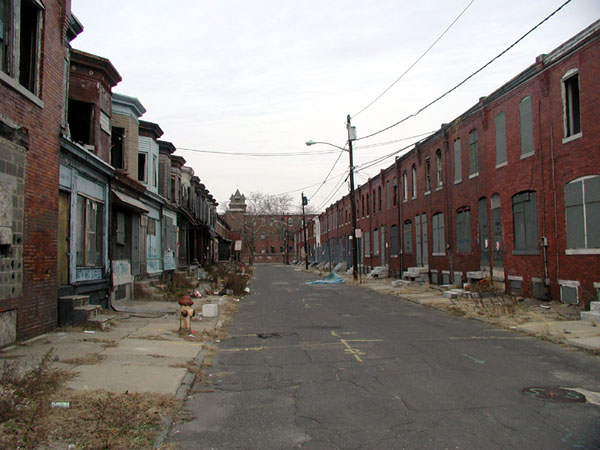 What I am about to share isn't a surprise, it's more of a reinforcement of just how screwed-up and unequitable our economy is. Yes, unemployment is down, companies are doing better, the economy isn't as precarious as it was back in 2008. On the flipside the jobs that have been added are service jobs at companies that refuse to pay living wage. Things our society sees as essential (quality education, healthcare, basic living necessities) are priced as luxury commodities only for the privileged. Economic mobility is shrinking and what we call The American Dream feels like just a dream.

Indeed life is sweet for the 1%, many of whom have seen their pay increase while bottom-rung employees have watched theirs stagnate. Some saw their jobs disappear altogether, either shipped overseas or whittled down and merged with the tasks of another employee for the sake of cutting costs. Much of the money made during the recovery is being sat on by people whose only intention is to hoard it.

Zoë Carpenter's article in The Nation takes a deeper look at how this economic inequality, last seen during the Depression era, has been slowly working its way into our culture since the 1970s. It is also noted how post-Depression equity was brought about through labor laws and regulations, and more pay and power to the average citizen, something we are not seeing much of today.

What do you think will help bring back economic power to the 99%? Improved labor regulations? Affordable higher education? Higher taxes on the mega-wealthy? A combination? Which one should we focus on first?

(Image: Camden, NJ, one of the poorest cities in the US.)

Just how strong is the economic recovery? Democrats have offered somewhat contradictory answers to that question recently. The picture President Obama painted in last week’s State of the Union address was mostly rosy. “The shadow of crisis has passed,” he declared, citing “a growing economy, shrinking deficits, bustling industry, and booming energy production.” And indeed, the US economy added more jobs in 2014 than it has since 1999, and unemployment is at its lowest point in more than six years.

The competing, bleaker, view—described most forcefully by Massachusetts Senator Elizabeth Warren—is that the good numbers don’t accurately reflect the reality lived by America’s workers. Middle-class families “are working harder than ever, but they can’t get ahead,” Warren argued in an early January speech. “Opportunity is slipping away. Many feel like the game is rigged against them—and they are right.” The tide may be rising, but it’s failing to lift most of the boats.

A new report from the Economic Policy Institute demonstrates as much. In the vast majority of US states, the top 1 percent of earners captured at least half of the income gains during the first three years of the economic recovery. In seventeen states, the 1 percent raked in all of the income growth. Those at the top of the economic ladder in Nevada, for example, saw their incomes grow by 40 percent between 2009 and 2012; meanwhile, other Nevadans incomes actually declined, by 16 percent.

The Northeast is the most unequal region, in part because of the concentration there of financial-sector and other executive-level jobs, said Mark Price, one of the authors of the report, on a conference call with reporters. Still, the pattern is consistent whether in Alabama or New York: the benefits of economic growth “have been flowing increasingly to this tiny fraction of households across most of the states.” 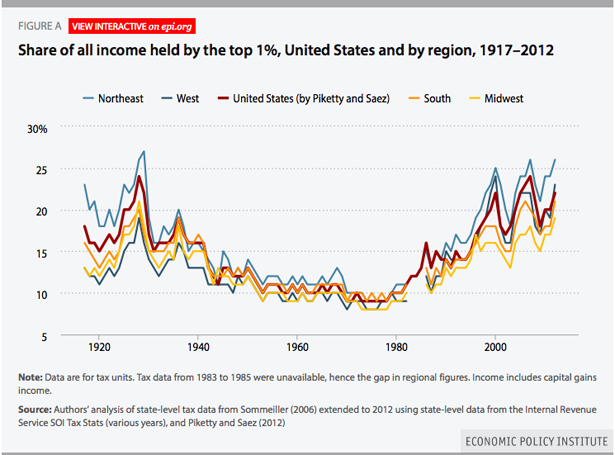 That’s not the effect economic expansions have always had in the United States. Price and his co-author, Estelle Sommeiller, examined ten periods of post-recession growth, beginning in 1949. For the next three decades things basically went the way we’d expect them to, with economic gains showing up in the paychecks of average workers. The balance shifted in 1979, and since then the 1 percent has captured an increasingly large share not only of income generally but also of growth during expansions. 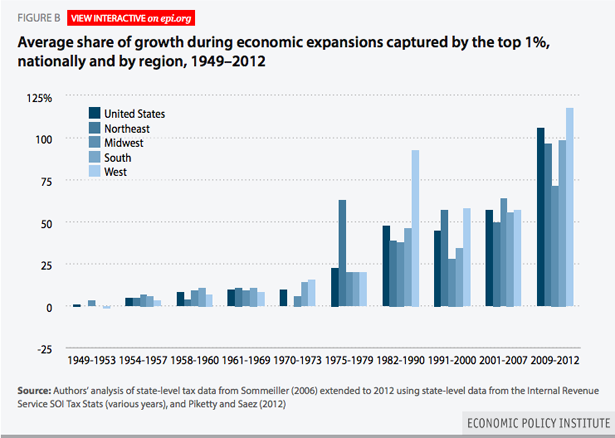 So what changed? The earlier era of more equitable recovery “was characterized by a rising minimum wage, low levels of unemployment after the 1930s, widespread collective bargaining in private industries…and a cultural and political environment in which it was unthinkable for executives to receive outsized bonuses while laying off workers,” Price and Sommeiller write. But today, they continue, unionization has hit historic lows; the minimum wage has lost its purchasing power; and executives are collecting lavish compensation packages, even as the economy is still struggling to near full employment. “Policy choices and cultural forces have combined to put downward pressure on the wages and incomes of most Americans even as their productivity has risen,” they write.

It’s these policy choices that Warren is talking about when she says that the game has been “rigged.” Price and Sommeiller’s analysis suggests that it would be shortsighted to assume that the current expansion will eventually trickle down to the 99 percent. If it hasn’t happened that way for three and a half decades, why would it this time, without a serious realignment of the economic and political systems that serve currently to funnel wealth upwards? Obama did nod to this reality in the State of the Union via a vague reference to “an economy where only a few of us do spectacularly well.” Still, the approach of many centrist Democrats seems to assume that, with a few minor tweaks, the rebounding economy will eventually have an effect on the inequality problem, too. The data shows the effect might be precisely opposite the one desired.