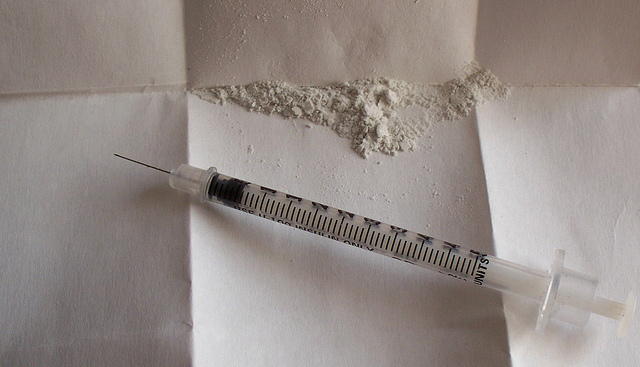 It's no surprise that the number of drug overdose deaths has gone up. While there are drug users in every socioeconomic bracket, the impoverished are the most likely to face substance abuse problems. Benjamin Spoer's opinion article in Al Jazeera America ties the rise in overdose deaths to poverty, and when you think about it, it makes a lot of sense.

Substance abuse can be a form of escapism, and when you feel you have nothing to live for you escape. This is a crushing reality for many people who work minimum wage jobs. You give yourself to employers through hours of high-stress labor. For many people there's the personal sacrifices of family time, and even a healthy sleep schedule for those working 2-3 of these jobs, all to simply make ends meet. For some people it's appealing to take what little is left over, and invest in some substance or another. It's an escape from a grueling reality that leaves people in it feeling burnt out and hopeless.

Spoer's solution to this crisis is to fight against socioeconomic inequality and have a universal basic income. Make it easier for people to take care of themselves and their families, and give them the flexibility to work towards pursuing their real professional interests. It will take a culture shift to truly implement this solution, but in the long run it gets to the root of many of our poverty-tied problems. As an example, Spoer discusses the height of the AIDS epidemic, and how stigma-induced despair led to more deaths due to patients not seeking out much-needed care. Instead many coped through engaging in high risk behaviors that spread the virus.

In ending inequity and stigma, we can build a stronger, better society. Our current system is broken and people are dying because of it. Let's not just continue treating symptoms and get to the root of the matter.

The United States is in the midst of an unprecedented drug-overdose crisis. Roughly 120 people die of a drug overdose everyday. Among white Americans ages 25 to 34 the overdose death rate in 2014 was five times its 1999 level, according to data from the Centers for Disease Control and Prevention.

“The number of people now dying from drug overdose is comparable to the number dying annually from AIDS during the peak of the AIDS epidemic in the mid-90s,” Talking Points Memo editor Josh Marshall wrote on Jan. 26. The comparison puts the current drug-overdose epidemic in perspective, but the more important parallel here is that both crises were caused, at least in part, by inequality and the deprivation and despair that inequality creates.

Inequality became understood as a public health problem with the introduction in 1995 of the Fundamental Causes approach, which maintains that access to economic and social resources have a huge influence on health. Moreover, while the immediate causes of health disparities may vary, social inequalities such as poverty, discrimination and prejudice will always have a negative effect on health through one mechanism or another.

The HIV/AIDS and drug overdose epidemics are perfect examples of how socioeconomic inequalities affect public health. In the case of HIV/AIDS, HIV stigma can push people to do things that might transmit the disease, like having unprotected sex. And those facing such stigma are more likely to have poor access to health care. In other words, stigmatizing HIV-positive people can lead to unnecessary AIDS-related deaths.

The current surge in drug overdose deaths is disproportionately affecting white Americans, who typically had better health outcomes than minority groups. Overdose deaths continue to fall among blacks and some Hispanic groups. This is not necessarily evidence that conditions are improving for minorities. On the contrary, one might reasonably hypothesize that income inequality has become so bad for low- and middle-income whites that it is starting to kill them in the same insidious ways that other fundamental causes, such as racism and discrimination, have been killing minority populations for decades.

The AIDS and drug-overdose epidemics differ in many important ways, but at their root they are partially caused by the despair people feel when society mistreats them. HIV-positive individuals have poor access to medical care because society stigmatizes and shuns them. Similarly, people working full time jobs still have so little money that they are driven to drugs to cope with their shame. These are both tragic examples of how social inequalities can make people so miserable that finding a way to cope with their despair becomes more important than protecting their health.

Unfortunately, these are the health consequences the increasingly unequal society in which we live. Hilary Clinton, the front-runner in the Democratic presidential race, has proposed, among other things, changing the way we prescribe painkillers and increasing funding for addiction treatment services. However, none of these solutions addresses the fundamental social inequalities that are driving the drug epidemic.

There are common sense ways to address the drug-overdose crisis. U.S. lawmakers can start by addressing income inequality and poverty. That entails providing a guaranteed basic income for every American. This would go a long way to ensure people have the food, housing, and existential security to live healthy lives. While this may sound outlandish on the face of it, even some conservatives have called for a similar measure. A guaranteed minimum income has been linked to significant health improvements, including 8.5 percent reduction in hospitalization rates.

Americans should take a hard look at the forces that drive inequality in our society, such as stagnant wage growth, which should be jump-started through new legislation; discrimination based on sexual orientation, which is still legal in over two-thirds of U.S states; and voter suppression laws, which structurally disenfranchise minorities and should be repealed. It is not only morally wrong that some people are disenfranchised, excluded and impoverished for the benefit of others who are included, encouraged and enriched as a result, this exclusion is literally killing people by depriving them of the resources they need to live happy, healthy lives.