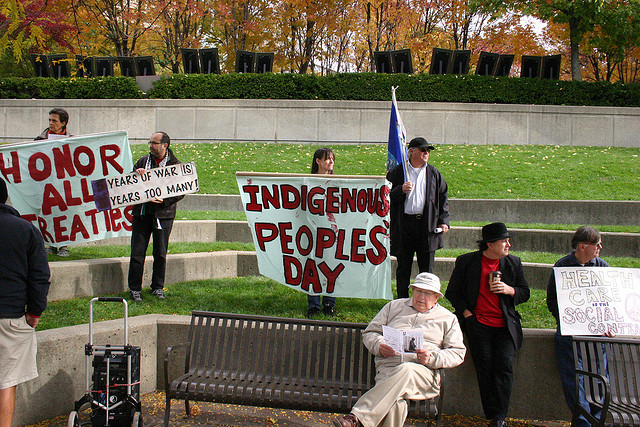 Columbus Day was this week. For many of us this is just another day off from school, or work if we hold an office job. Columbus Day became an official holiday in the 1930s when the Knights of Columbus wanted to brand Columbus as a hero for Catholic youth. Before then celebrations centered around Columbus were developed to instill patriotism. Many Italian Americans observe Columbus Day as a day to celebrate their heritage.

Anyone who has read or heard of Howard Zinn's A People's History of the United States knows that exploration came at a price. Columbus wasn't the benevolent explorer of our children's books. A fact that is becoming more publicly discussed. In counter, people now observe such days as Indigenous People's Day, or World Culture Day to recognize and honor native populations.

To this day Native Americans are facing challenges laid out by Western imperialism. Bryce Covert's article on Think Progress gives us some grim statistics regarding health, unemployment, education, and poverty among Native Americans. A population that was once dominant in this country has been reduced to racial minority, a minority we don't hear much about. Take this as a reminder that racial justice benefits all minority races.

Every year, many schools and businesses across the country close on the second Monday in October to celebrate the Italian Christopher Columbus’s arrival in what are now called the Americas on October 12, 1942, or the “discovery” of America. Of course, Native Americans were already here. And Columbus, while remembered as a hero by many, was brutal to the native people. In his quest to find gold, he enslaved them, working thousands to death; brutalized them; and murdered them.

The native population was nearly wiped out. In A People’s History of the United States, Howard Zinn writes, “In two years, through murder, mutilation, or suicide, half of the 250,000 Indians on Haiti were dead.” Columbus’s efforts amounted to genocide. Native people “were worked at a ferocious pace, and died by the thousands,” Zinn writes. “By the year 1515, there were perhaps fifty thousand Indians left. By 1550, there were five hundred. A report of the year 1650 shows none of the original Arawaks [on the Bahamas] or their descendants left on the island.”

Native Americans in what is now the United States would continue to be killed by later settlers in enormous numbers, have their land stolen by the government, and see their rights trampled on. This is Columbus’s legacy, and the effects of his violent campaign and the decades of oppression afterward can still be seen today in the huge disparities between the Native American population and the population in general.

In 2012, one in four American Indians and Alaska Natives lived in poverty, compared to a national rate of 14.5 percent. For those who identify these groups as their only race, their poverty rate was just over 29 percent. Poverty rates are even higher on big Indian reservations: Among the top ten largest, rates range from 20.2 percent for individuals to as much as 53.5 percent. And extreme poverty on these reservations is, on average, four times as high as the national rate.

The achievement gap between students of color and white students has been steadily closing, but not for Native students. Native Americans, including American Indians and Alaska Natives, have seen their gaps widen. In 2011, 18 percent of Native fourth graders were proficient or advanced in reading on the National Assessment of Education Progress, compared to 42 percent of white fourth grades, a gap that has stayed flat since 2005. Just 17 percent of Native eighth graders scored at those levels in math, compared to 43 percent of white ones. Other racial groups saw improvements during that time that far outpaced Native students.

Part of what’s going on is that schools on or near Indian reservations rely on federal Impact Aid for their budgets, since they don’t collect the same property taxes that fund other public schools. But that aid has been cut. Last year, sequestration reduced funding by $60 million, leading hundreds of schools to lay off support staff and teachers and increase class sizes, some to eliminate academic programs and extracurricular activities, and a few to close outright.

An important cause of these gaps is that they have less access to high-quality health care. More than a third of Native Americans lack health insurance, compared to the national rate of 17.2 percent. The government has contractual obligations to provide for the health of Native Americans, but, according to a 2006 report from the American Journal of Public Health, it “is consistently funded at a dramatically lower level than other government health programs.” The Indian Health Service was funded at just 54 percent of what was needed in 1999. The report concludes that it’s likely that the disparities in Native American health outcomes “are related to the inadequate funding of [American Indian/Alaska Native] health programs.”