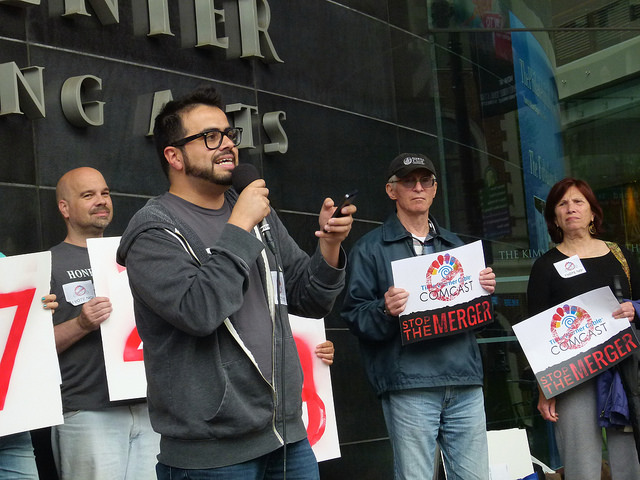 In February it was announced that Comcast is seeking a merger with Time Warner Cable. Comcast and Time Warner are the two largest television and internet providers in the Country, meaning that a merge between both would create a media superpower. Comcast states the merger would improve service, as well as expand affordable service to rural areas. Critics say that it would make Comcast too powerful by giving them the power to cut down smaller competitors, as well as give them free reign to do as they wish with their services. The merger still needs some approvals through FCC and Department of Justice before it can be allowed. Until then, consumers have been speaking out.

Economically this raises concerns. Current rural customers are unhappy with Comcast's services, including their supposedly-affordable prices. Both companies rank dismally in customer service satisfaction. There's the not-so-covert efforts by Comcast to undermine net neutrality and workers' rights as well. Plus concerns that such a merge would open the doors for future mergers between large companies, putting more money and power into the hands of mega-sized corporations while taking away power from the consumer.

Sarah Lazare of Common Dreams explores these concerns, citing how numerous social groups and consumers have demanded that this merger be blocked. What are your thoughts? Would this merger open the door for mega-sized corporations to further take power away from the consumer? Would it aid in the end of small providers who would either merge with larger companies or shut down?

Please note, the FCC Public Comment period for this issue are now closed.

Sixty-five consumer, social justice, and media reform organizations on Monday released anopen letter urging the Federal Communications Commission to reject the proposed merger between Comcast and Time Warner Cable on the basis that it would "inevitably lead to unprecedented gatekeeper control over our nation’s telecommunications and media landscape."

The letter was timed for the final day of the FCC's public comment period, which concludes Monday at midnight.

In submitting the statement, the organizations add to the growing numbers of people across the United States who vocally oppose the deal—from street protests to petitions, including one that garnered 400,000 signatures.

Announced in February, Comcast's proposed $70 billion merger (including $45 billion in equity and $25 billion worth of debt) with its largest cable competitor would give the company control over high-speed internet access for nearly 40 percent of U.S. consumers and two-thirds of the cable market.

The letter—signed by organizations including the Media Mobilizing Project, Center for Media Justice, Color of Change, and Center for Rural Strategies—warns that the pact "would allow Comcast to use its increased market power, and increased control over millions more customers, to dictate terms to broadband content providers and increase its leverage over cable programmers."

Comcast has sought to curry political and public favor by championing the "Internet Essentials" program it says provides affordable broadband service to low-income communities and presenting itself as a defender of net neutrality. But Timothy Karr of Free Press, one of the organizations that signed onto the letter, told Common Dreams that this is empty rhetoric is aimed at "sweetening the deal in the eyes of regulators."

"The company has no real interest in offering low-cost internet access to communities, and a lot of people in low income communities have complained," he said. "Furthermore, Comcast is actively funding organizations that are outspoken in their opposition to net neutrality and has championed the rolling back of net neutrality."

According to the letter, Comcast has already found numerous ways to leverage its "market power to hike consumer prices" and "charge new tolls for Internet content and create special exemptions for its own video services."

The letter argues that the merger would further devastate media localism, diversity, and democracy:

At the state level, firms like Comcast have lobbied for "State Franchising" bills that have stripped municipalities of the power to negotiate franchise agreements with cable companies. This merger would also further the need for measures promoting diversity in ownership.  The FCC's most recent statistics found that already low ownership levels for people of color have only gotten worse.  Allowing Comcast to merge with Time Warner Cable would only continue the trend away from the diverse local media our communities need.

The company's merger with NBC in 2011 already gave it control over numerous stations and networks. Meanwhile, Comcast has hired a small army of lobbyists to push through the deal, in what The Hill referred to in May as a "shock and awe" political pressure campaign. But the merger is not the only issue Comcast has fought for. The company has also lobbied aggressively against net neutrality, is a prominent backer of the right-wing American Legislative Exchange Council, and in 2012 even lobbied to defeat a measure in Philadelphia which would have ensured paid sick days for thousands of workers.

The merger must pass two regulatory bodies to go through: the FCC, which will determine whether the deal is in the public good, and the Department of Justice, which will look at issues pertaining to antitrust laws.