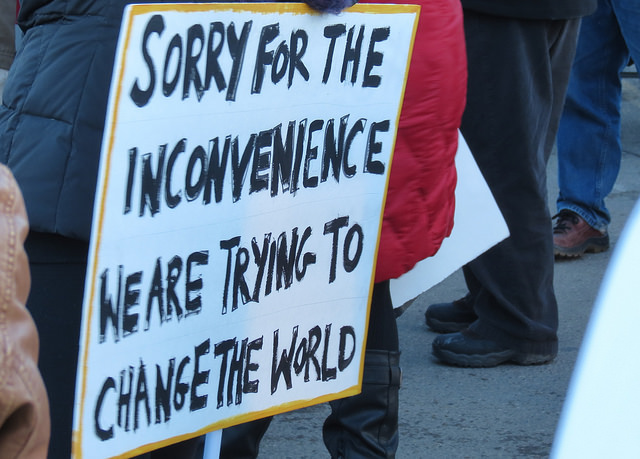 Intersectionalism is the study of intersecting relationships between forms of oppression, a concept with roots in the 19th century, but no formal name until 1989, when Kimberlé Crenshaw coined the term. Crenshaw's career focused on critical race theory, particularly in the feminist movement and race. Intersectionalism illustrates just how interlocked different forms of oppression can be, and shows the strength in banding together for related causes.

Again, the concept isn't new, the abolition movement and the women's suffrage movement worked together in the early 1800s, a famous example being the Grimke sisters. Today, we're seeing collaboration between the Black Lives Matter movement and Fight For 15. Diane Krauthamer's article for Counter Punch gives a more detailed look into how Fight For 15 is both working with racial justice, and low wage workers outside the fast food industry.

Racial and economic justice are a crucial mix. The majority of black communities are in poverty, those who are working are usually stuck working minimum wage jobs. If we look at economic oppression as a form of non-visible violence, black communities are facing a double-whammy of systematic violence against their humanity. This has even been voiced in Rochester. For those who were not at the Black Lives Matter rally at the Liberty Pole the Sunday after Thanksgiving, one of the die-ins was at the intersection of Court and Chestnut, where many executive level business workers enter the downtown for work. It was a symbolic stand against big business' exploitation of its lowest level workers, and a call for accountability by companies who can make workers' lives harder with the simple stroke of a pen.

Where do you see causes intersecting? Are there any other movements that could collaborate with either Black Lives Matter or Fight for 15?

“We are standing up for our wages because we deserve better,” says Ebony Williams, a 22-year-old Jack in the Box “crew member” in St. Louis. “And we’re standing up against racism and police brutality because the world needs a change.”

Williams, who’s seven months pregnant, makes $7.50 an hour with zero benefits. As part of the “Show Me $15” fast-food worker organizing campaign, she was one of nearly 200 St. Louis workers who walked off the job yesterday.

Reacting to the recent decisions not to indict police officers for killing unarmed African American civilians in Ferguson, Missouri, and in Staten Island, New York, workers across the country began their strike actions with a minute of silence and their hands held up over their heads.

Fast-food workers and supporters gathered late Tuesday evening to shut down the Phillips 66 convenience store in St. Louis. They chanted “hands up don’t shoot” and did a die-in in remembrance of Mike Brown and Eric Garner.

The following morning, they rallied at Hardee’s, McDonald’s, and Chipotle. Later they marched downtown, had a second “hands up” moment of silence, and did another die-in.

Show Me $15 has been going for two years, but Williams said the mood has shifted since Michael Brown was shot. There’s a sense the struggles are closely interconnected.

“Most fast-food workers live in poor communities, just like Ferguson,” she said. “And if we had good jobs, if these corporations were paying their workers a livable wage, our community would be a lot stronger.”

Such low wages encourage crime, she suggested. “There’s a lot of people…who feel like they can be out in the streets making more money than going to work and being paid $7.50 an hour.”

Workers from the McDonald’s in Ferguson participated in the actions as well. That store was burnt down during the uprising that followed Brown’s death at the hands of police officer Darren Wilson on August 9.

In the days after the shooting, members of the fast food workers group joined demonstrations daily. They said their experience striking hadhelped them know how to organize for justice.

The St. Louis action was one of dozens of strikes in a national day of action organized by the SEIU-funded Fight for $15 campaign. It marked two years since the campaign’s first action, when hundreds of McDonald’s, Burger King, and Wendy’s cooks and cashiers struck in New York City.

According to campaign organizers, fast-food workers struck for the first time yesterday in Jackson, Mississippi; Knoxville, Tennessee; and Buffalo, New York. They said workers in 190 cities participated in all. Enthusiastic rallies and pickets began early in the morning and went on well into the afternoon.

In Kansas City the campaign is called “Stand Up KC.” Workers from Wendy’s and McDonald’s intermittently raised their hands over their heads and chanted “hands up don’t shoot” as they marched through the Waldo area, down 85th Street, which is lined with fast-food chains.

Protesters managed to enter a Taco Bell, but police deterred them from entering a McDonald’s and a KFC. There were more police present than during previous fast-food worker actions.

Besides fast food, according to campaign organizers, the national Fight for $15 has begun reaching out to other low-wage industries in the service sector. Home health care aides protested alongside their clients in many cities, part of SEIU’s Home Care Fight for $15, launched in September.

“I feel that what happened with Michael Brown was wrong and unjust, just like these corporations are wrong for paying these workers what they pay them. And so it ties together, because you always want to stand up for what you believe in,” Williams said.

“If you don’t stand up for anything, nothing will ever change.”