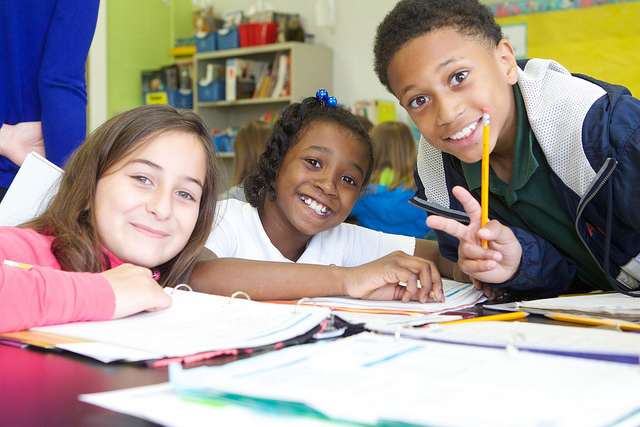 Many of us can agree that in theory having standards for schools is a good thing. Many of us can also agree that Common Core is a very flawed system of standards. The required annual tests pressure teachers to prioritize teaching tests over engagement, there's little wiggle room for children who are either exceptional or struggling, and it forces English as a Second Language (ESL) students to cram years of language education into a relatively small time frame if they want to succeed in school.

Rochester has a significant refugee population, which leads to a number of ESL students in its public school system. Children's School of Rochester (School 15) specializes in, and reserves half its new student slots, for immigrant and refugee children. These children have to not only keep up with classes where English is the primary language, they also have to take extra time, and testing, to learn and improve their own English. That is a lot for a young child to take in.

Jose Luis Vilson's article for The Progressive discusses Common Core, his experience as a teacher, and how current standards are hurting students. Especially those who are learning English as a second language, and those students who have education needs that require more tailoring. His worry is how these standards are what drives classrooms, and how many students are being held back in one respect or another from what material constitutes as "developmentally appropriate" to the hurdle of learning and testing on English learning skills, added onto the other major subjects students are regularly tested for.

When we stand up for our students, we are standing up for our future. This includes the students of families who come here for a better life. What are some alternatives you can think of to help ESL students learn without overloading them?

(Image source: US. Dept. of Education. Licensed under Creative Commons.)

When I was growing up, my family spoke mostly Spanish, but everyone at my school spoke English. Since my mother prioritized academic success over cultural acclimation for me, I found myself slowly abandoning Spanish. Taking Spanish as an elective in middle- and high school helped me make technical sense of the written language, but by then I had abandoned my mother’s native tongue in full, uprooting a small sense of my position in my extended family.

Bilingualism is an exercise in constant transition and preparation. In school, how one flips from one language to another ultimately determines an English language learner’s success.

Before the Common Core came into play in New York State, bilingual education was already fraught problems and peril. But the Common Core tests have only made things even harder. English language learners take their first English standardized language exam a year and a day after they matriculate. Experts say it takes four to five years to fully learn a new language. But in New York, after a year and a day, all bets are off. English language learners are given a battery of tests for reading, writing, listening, and speaking over a two-week period, in a season already packed with exams for math, science, social studies, and regular English. The New York State English as a Second Language Achievement Test (NYSESLAT) is a strenuous exam on its own. Students listen to English narration and are asked to respond in written form. Students are also assessed individually for speaking the language and reading extended passages. It boggles the mind that with such an exam, this set of students also has to take the mainstream English test.

A typical an eighth grade English language learner is subjected to one standardized test per week from early April through mid-June, all of them with multiple parts meted out across multiple days. Students of all backgrounds report confusing language on the standardized Common Core English and math exams.

With different levels of language attainment for all of our English language learners, teachers have to simultaneously prepare students to learn the language conversationally while teaching them to read for context and ideas like students who are native English speakers. These challenges existed before Common Core, but trying to implement a new set of standards exacerbates the disconnect between policy and actual classroom practice. The students who came in with strong language skills in their home language will adapt quickly to the English language, but what about those who didn’t? If the English teacher solely focuses on the Common Core, what do we say to students who barely pass the Common Core English test, but still can’t pass the NYSESLAT?

Do they speak English or not? Which exam do we believe?

What’s more: there seems to be little evidence that standards themselves actually improve achievement. Sonia Nieto, one of the leading experts in language, literacy, and culture in K-12 education, wrote in her latest book Finding Joy in Teaching Students of Diverse Backgrounds, “Although the [Common Core] has the potential for raising expectations for student learning and for enhancing the quality of the curriculum, it comes with several troubling cautions.” One of those cautions Nieot cites comes from a 2012 study by Joshua Goodman at Harvard’s John F. Kennedy School of Government. Goodman found that changes to state standards over the past twenty years have had little, if any, impact on student achievement. “Little is known,” Goodman concluded, “about how the quality of written standards translates into improvements in curriculum, pedagogy, and student achievement.”

Perhaps the new standards are different. Based on my classroom experience, I can attest to the depth and seriousness of these standards in math and English. But what worries me as a teacher is the focus on letting the standards and policies drive the pedagogy of the classroom rather than creating an exchange between policymakers and practitioners.

Take the use of the term “developmentally inappropriate,” which is ubiquitous in the instructions to teachers that accompany the Common Core state standards. That phrase, “developmentally inappropriate,” aroused a certain skepticism in me from the beginning. Whenever people say, “A child shouldn’t be learning x at this time,” it reminds me of the teachers who still want to teach basic multiplication in eighth grade, to students who are clearly ready to move on to higher math. As an equity issue, we have to assure that students are learning more than arithmetic before they get into high school, where they have to make choices about the courses that will determine their horizons for years to come.

Of course, kids might be reluctant to take a course if they don’t feel prepared.

The problem with setting limits based on what is deemed “developmentally inappropriate” is even thornier where bilingualism, poverty, and racism intersect. While we have 400 languages spoken in my school, more than 71 percent of the declared English Language Learners speak Spanish in some form. There used to be a time when our country could easily stereotype these Spanish-speaking students as low-income kids in urban schools, with few resources and no voice in the policy discussion. Now, as more Spanish speakers show up at rural schools’ doors, students, parents, and teachers are struggling to negotiate a new reality, while dealing with the constraints of the Common Core, the new materials, new policies, new standardized tests, and sometimes callous superintendents and governors who don’t have much patience or respect for teachers who work with English language learners. Many of the activists on the front lines, fighting back against the corporate business model of education happen to be the bilingual educators who understand the needs of their students.

California has the largest number of English language learners in the country, with more than 1 million students who speak a second language. A whopping 84 percent of these students speak Spanish, but significant numbers also speak Chinese, Vietnamese, Tagalog, and Arabic. How do policymakers look at this data and allow for mass school closures, the layoffs of thousands upon thousands of educators, and a sink-or-swim, test-driven system of education? How do they put up with class sizes that have ballooned as high as forty-five in the very schools where our students need the most support? iPads and new apps won’t solve these problems, and neither will a new set of standards airdropped from on high.

The term "developmentally inappropriate rings true to many educators. But it's not because students can't learn. It’s because of government officials who refuse to develop an appropriate learning environment for our students.