Inequality and the Case for Unions 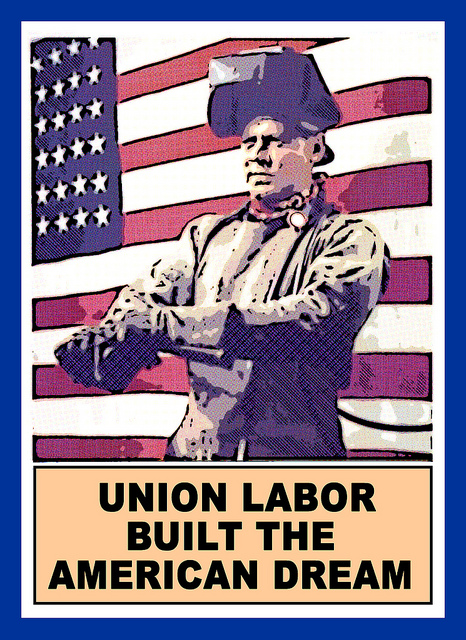 Unions have been a major part of the American labor movement ever since America became industrialized. Through Industrial progress, manufacturing jobs led to long hours away from home, low pay, and a high risk to one's health. Many of the labor laws and rules of thumb of today (8 hour shifts, breaks, pay rate, benefits, safety laws, etc.) came about in thanks to labor unions.

Today's labor movement isn't all that much different from the labor movements of the past. People are still fighting for a living wage, health coverage, and proper working conditions. Tim Koechlin's article for Common Dreams illustrates why we need unions if we're to achieve economic justice. He also illustrates how partisan politics has treated the modern labor movement, from the side working to bust unions, to the side who claims to support the American worker while doing little to ensure their well being. What are some ways we can support Rochester's hard-at-work labor unions?

Across the country, Republican legislatures – encouraged and financed, as usual, by corporate money and right wing think tanks-- have undertaken a stunning array of initiatives designed to weaken unions and otherwise undermine American workers.   Scott Walker of Wisconsin, along with several other Republican governors, has moved aggressively and conspicuously to disempower public sector unions.  Nikki Haley, the Republican Governor of South Carolina, recently declared that unionized businesses are not welcome in South Carolina.

Republicans tell a tired, cynical story about all of this, insisting that union busting is, somehow, good for the economy and good for workers.   It’s the same old trickle down nonsense.

Democrats, on the other hand, have done too little to defend unions and worker rights.

This systematic attack on unions is, of course, bad for working Americans.  Unionized workers in the US earn more money than non-union workers with similar skills (14% more, according to the Economic Policy Institute).   Unionized workers are 28% more likely to have employer provided health insurance and 54% more likely to have employer provided pensions.  Unionized workers enjoy more vacation time, and they are more productive than non-union workers.   Countries with high rates of union coverage enjoy lower rates of inequality and lower rates of poverty, and their workers enjoy greater economic security.   And, further, a robust union movement raises pay and working conditions for non-union workers as well.

In 1973, 27% of US workers were unionized.  Now, it’s just 13% -- the lowest rate among the world’s rich (“industrialized”) countries.   It is no coincidence that the U.S. is, by every reasonable measure, the most unequal of the world’s rich countries.

Since 1979, the share of income going to the top 1% in the U.S. has grown by more than 300%.  Meanwhile, wages have stagnated – and, for many millions, declined -- even as labor productivity (the value of a worker’s output in an hour) has more than doubled!   In 1978, CEOs earned 26 times more than a typical worker.  In 2013, CEOs at the largest 350 U.S. corporations earned 296 times more than a typical worker!   This stunning and appalling redistribution of income – economy-wide, and within corporations -- is in part the result of massive tax cuts for the rich and the erosion of corporate accountability (aka “deregulation”).   It is also the result of a systematic effort to undermine the bargaining power of US workers.   Union busting has enriched capitalists at the expense of workers.

The Right insists that working class Americans are falling behind because of overly-generous “entitlements” and overpaid public sector employees.   In reality, the lost income of workers of all sorts – union and non-union, black and white, male and female, public sector and private sector – can be found in the pockets of the 1%.

A hundred years ago, U.S. workers -- including millions of children -- worked long hours for low wages in unsafe workplaces.   Because of organized labor, the prospects for working Americans improved dramatically over the course of the 20th Century.  Because of unions, millions of U.S. workers were able to achieve a middle class life – economic security, home ownership, health insurance, vacation time and, perhaps, a college education for their children.   From 1948-1973, the incomes of working class families in the US nearly doubled!

In addition to higher wages, the struggles of organized labor have delivered virtually everyprotection and benefit enjoyed by U.S. workers.  Unions have brought working Americans the 40 hour week, paid vacation, Social Security, Medicare and Medicaid, overtime pay, child labor laws, the Occupational Safety and Health Act, whistleblower protection laws, sexual harassment laws, lunch breaks and coffee breaks, wrongful termination protection, sick leave, the Americans with Disabilities Act, the weekendand much more.  These rights, benefits and norms were not gifts from employers.  They are the result of relentless organized struggle by working Americans.   And with each struggle, big business and its apologists have insisted that this change would fatally undermine their competitiveness.

As unionization rates have fallen over the past several decades, wages have stagnated and the “American Dream” has drifted out of reach for millions.   The Economic Policy Institute estimates that plummeting rates of unionization account for one third of rising inequality in the US since 1980.

Raising the pay of working Americans has to be at the top of a progressive agenda.  And this means we have to prioritize the empowerment of the labor movement.

But aren’t unions prone to corruption?   Sometimes (although way less often than right wingers would have us believe).   And some parents are abusive.   Some doctors commit fraud.   And some bankers are greedy and mendacious.    It does not follow that we’d be better off without families, doctors, or a financial sector.   Nor does it follow that workers are better off without unions.

The US has long been a hostile environment for unions, and this has been especially true since 1980, when the Reagan administration declared war on organized labor.  Cornell’s Kate Bronfenbrenner has chronicled the increasingly aggressive (and often illegal) tactics used by employers to block organizing efforts, and the meager protections available to organizers and workers.

The Republican Party’s economic policy agenda has not changed for decades.   Cut taxes for the 1%.  Deregulate – so that banks can run wild and corporations can pollute with impunity.  And undermine the bargaining power of workers.  Union busting is central to the Republican brand.

Working class Americans have been losing ground for 35 years.  To reverse this, we need a re-empowered and a re-legitimized labor movement. We need to tell the truth about unionsand union busters.  We need to actively support our allies in the labor movement, and we need to demand that our representatives work to create a political and legal environment that facilitates the growth of unions and union representation.

And, relentlessly, we need to ask our representatives – especially fearful, cautious, and misguided Democrats:  Which side are you on?

Unions are good for workers.   It’s that simple.