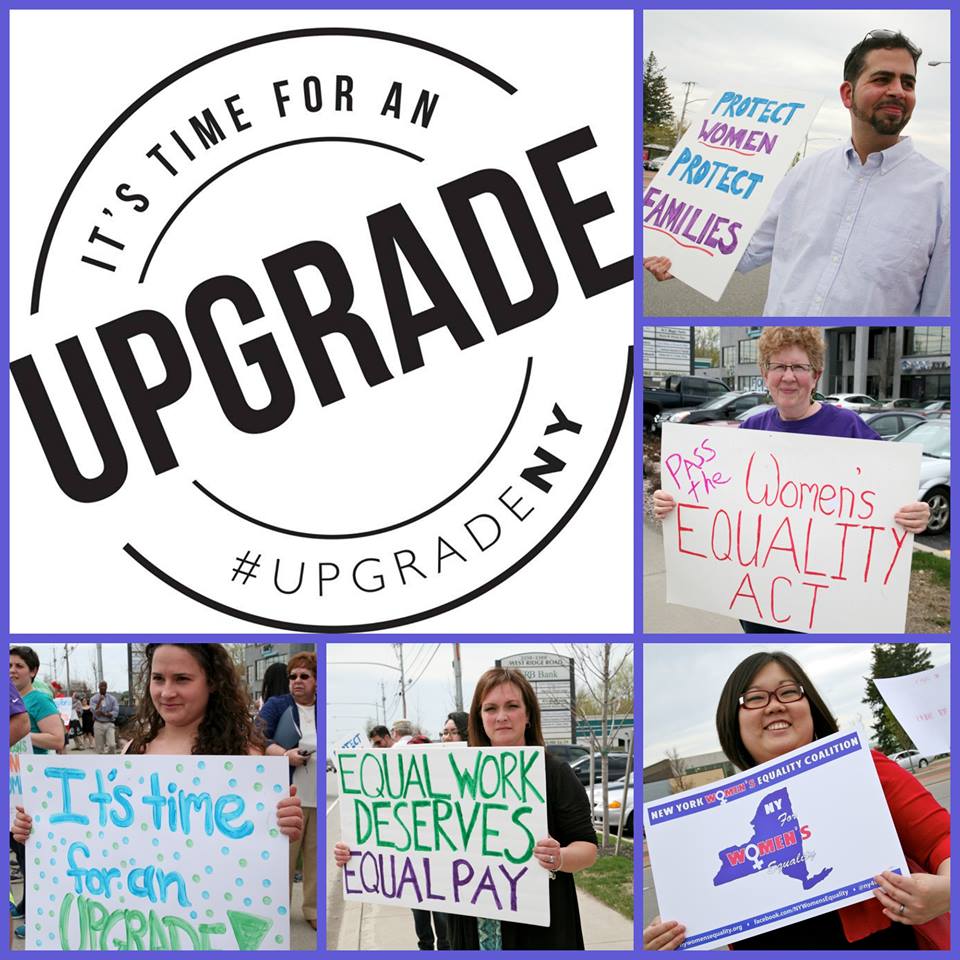 Earlier this week Metro Justice helped present a rally on the lawn of the American Association of University Women's Rochester building on East Ave. to drive home that we want a vote on the Women's Equality Act before this year's legislative session ends. New York State Assembly has passed the bill, but the Senate is taking their sweet time.

Nine of the ten points have been approved with little question, but the tenth point that protects reproductive health rights has been the point of controversy, and to some legislators, a point to be compromised. Madeline Ruoff's article in the Huffington Post explains how this tenth point ties in with the other nine points, and how that point is needed for full equality. Having a child is life-changing in more ways than one. Look at the point to end workplace discrimination against pregnant women, or how mothers are treated when they prioritize family before their careers. Low income women face greater economic struggle when a child enters the picture, just look at how many children in Rochester are in poverty. The issue is just as much an economic one as it is a health one.

We urge you to take action on this issue. You can contact your senator and demand a vote. You're always welcome to volunteer with us as well! If you can think of anything else that would help nudge the Senate into voting please share in the comments. And remember, if it doesn't pass this year we'll be fighting for passage next year.

In his 2013 State of the State address, Governor Cuomo announced long overdue plans to bring the Women's Equality Agenda, now the Women's Equality Act, into law. It garnered a mention in this year's State of the State, but this act is absolutely critical and must be made a focus in 2014. The predominately Democratic NYS Assembly passed the act in January, as it had done in 2013. The real battle comes in the Senate.

The 10 point plan ends discrimination based on gender: housing, pay, employment, etc. When surveyed, most NYS residents thought that the equalities the WEA ensures were already in law.

Its first nine points are relatively uncontroversial, addressing issues such as domestic violence human trafficking. In 2013, they were all approved by the Senate.

But the tenth point, which ensures a women's reproductive freedoms -- essentially, it would update New York's outdated abortion law to codify the protections determined in Roe v. Wade, giving a woman a 24-week window for abortion and ensuring that qualified physicians cannot be prosecuted for providing such services -- was never even voted on, despite a full 80 percent of NYS residents supporting it.

The left is being chided for refusing to split up the bill and just pass the first nine points without argument as a compromise; however, it must be recognized that the bill, although introduced by Democrats, has been tweaked by both sides behind-the-scenes and already is a compromise.

But perhaps most importantly, without the passage of the tenth point, the first nine are significantly weakened.

As assemblywoman Didi Barrett stated, "If a woman can't make choices about her own body and her own reproductive health, you're really not delivering equality in other areas."

True social and economic equality is impossible without reproductive freedom.

First and foremost, a woman should be trusted to make her own decisions regarding her own health, and obviously that means should choose whether or not she should deliver a child and when. The right to choose when, if ever, to raise a healthy child is a personal decision, and forcing a woman to do so when she feels she is not ready can have dire consequences.

The NYS Senate is almost entirely composed of men -- men are therefore saying that their opinions of what a woman does with her body is more important than her own. So much for gender equality.

And considering the cost of child-rearing, it's ludicrous to consider it as anything but an economic issue.

An unwanted pregnancy certainly deters a woman's career opportunities. Job-hunting while pregnant is almost futile -- only 1 in 20 hiring managers say they would offer a job to a pregnant woman. Employed pregnant women will almost invariably have to limit their hours and the tasks they perform.

Pregnancy in itself is pricey, costing the average American woman $30,000, but that's just the beginning. Actually taking care of a child is unfeasible for many women; CNN found it costs an average of $241,000 for a middle-class couple to raise a child to age 18.

Early motherhood correlates negatively with lifetime earnings: a study conducted by the University of Virginia found that, on average, a 20-year-old woman increases her lifetime earnings by 10 percent for each year she delays childbirth.

Furthermore, poor sex education or low income hinder a woman's access to birth control, meaning that point ten will have the most profound effect on the lower classes and could potentially reduce income inequality. In fact, 40 percent of women seeking abortions live in poverty, and over 20 percent of children in NY live in poverty.

Obviously, not every woman who gets pregnant is in a position to deliver or actually raise a healthy and safe child. Even if that were the case, a woman should be able to decide what's best for her. Pregnancy is taxing, painful and expensive, and it's only the first nine months of a lifetime commitment. An unwanted pregnancy means that a woman will be forced to rethink her career path, her future plans, her livelihood.

Point ten ensures that women in New York State will have control over not just their health but also their own economic situations. Gender equality is dependent on a woman's ability to have control of her body.

In 2014, it's time the Women's Equality Act once and for all, with all 10 points included. It's what the people of New York want, and it's a necessary step towards gender equality. Cuomo needs to step up and push for the WEA instead of treating it as an afterthought.