Happy new year! Read on to catch up on everything our members accomplished in January to give Metro Justice a powerful start to the new year. 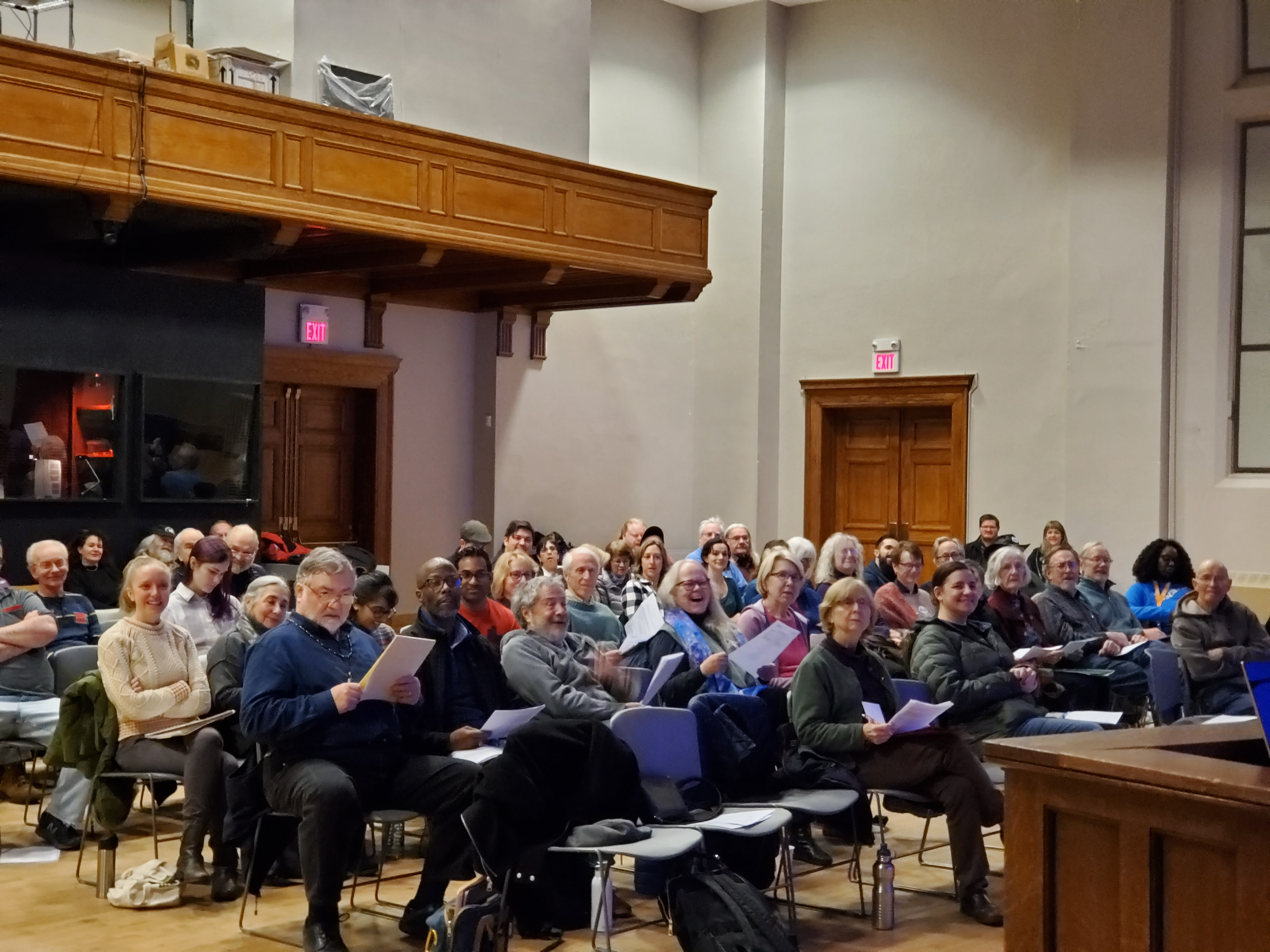 This past January, we had our Annual Members' Meeting! As a grassroots, democratically run organization, the Annual Members’ Meeting is our most important meeting of the year. Check out Metro Justice's 2020 Council here! 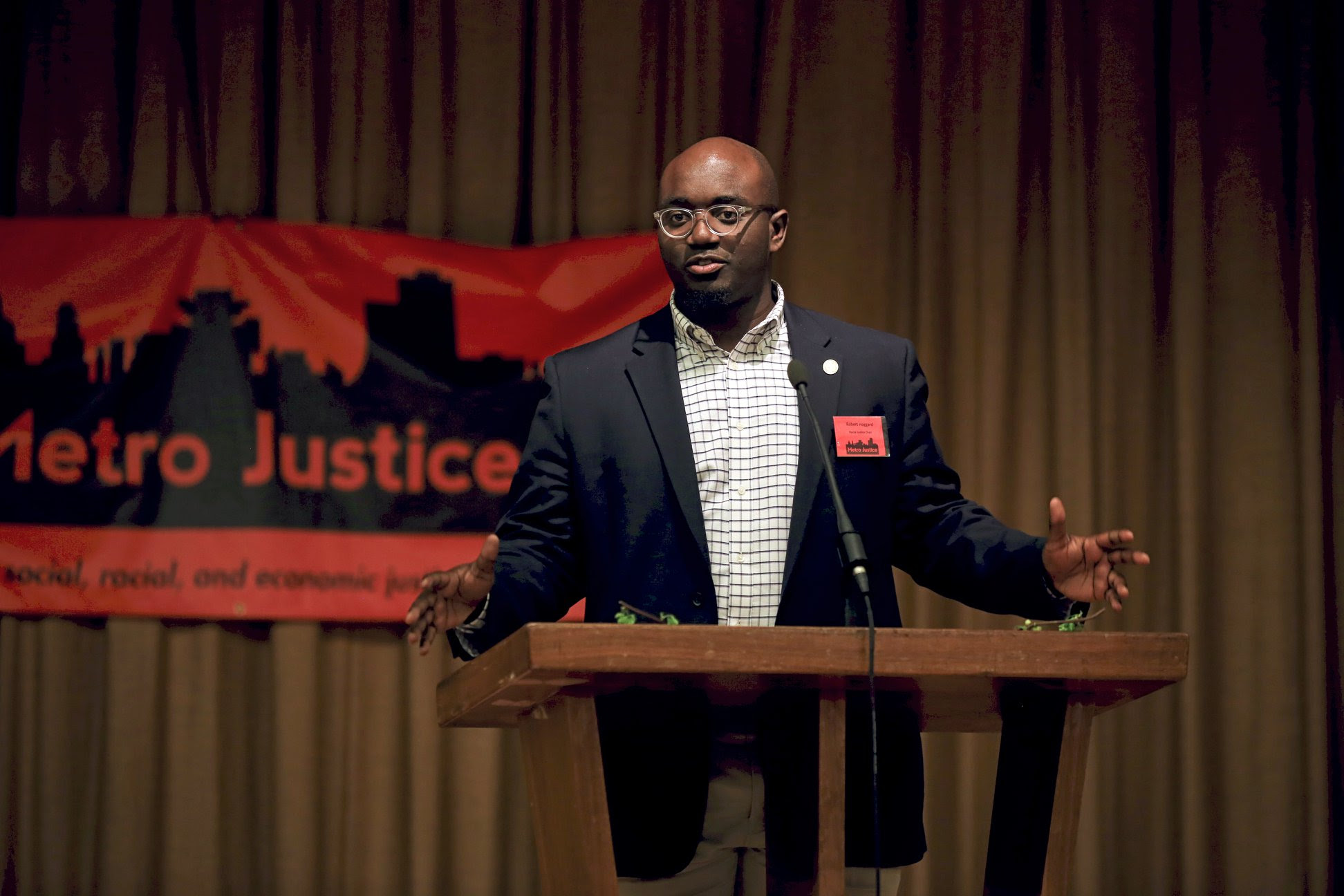 At this year's meeting, our Vice President, Robert Hoggard, delivered an inspiring and thoughtful keynote address. Robert first took us back to our roots as an organization to set up a bold vision for the future:

We have been lied to! We have been fooled into thinking that justice is supposed to take time! At Metro Justice, I’d like us to stand firm on the fact that justice should never be delayed. If justice comes at the speed that our oppressors dictate, it’ll never come. If Harriet Tubman and Nat Turner advocated for freedom based on their Master’s rules, slavery would have never been abolished. But rather justice comes because you kick the doors of injustice down. WE won’t get anywhere gently turning the door handles of racism, homophobia, xenophobia, greed, etc. But we will advance our democracy when WE stop playing pitty-pat and kick the door in.

I ask that question to the Annual Members meeting today, “How much time do you want for your progress?”

We have spent time knocking on doors and donating our hard-earned money to political candidates who give us shiny speeches but refuse to fix our healthcare system.

We have wasted our efforts on political candidates that have overpromised on economic security and yet our city remains one of the poorest in the country.

We have caucused for political candidates who have shipwrecked some of our movement priorities to slap their names on it and piece mailed our demands.

Today, we put the nail in the coffin on drive-thru progressivism and we ask you to renew your commitment to movement building. WE focus on the issues because after Democrats regain power and after the dust settles, the pharmaceutical lobbyists still influence our health care. After Democrats take control, forget Wall Street, politicians don’t want to fight RG&E on Brooks Avenue. How are we going to fight Wall Street when we can’t even tackle the special interests on Main Street?

Some so many heroes died young because their death spoke to what kind of world they wanted to live in. So, they spoke the truth at all costs. This country was built on those who spoke and lived the truth even though it cost their life. And out of that comes us.

No War with Iran Rally 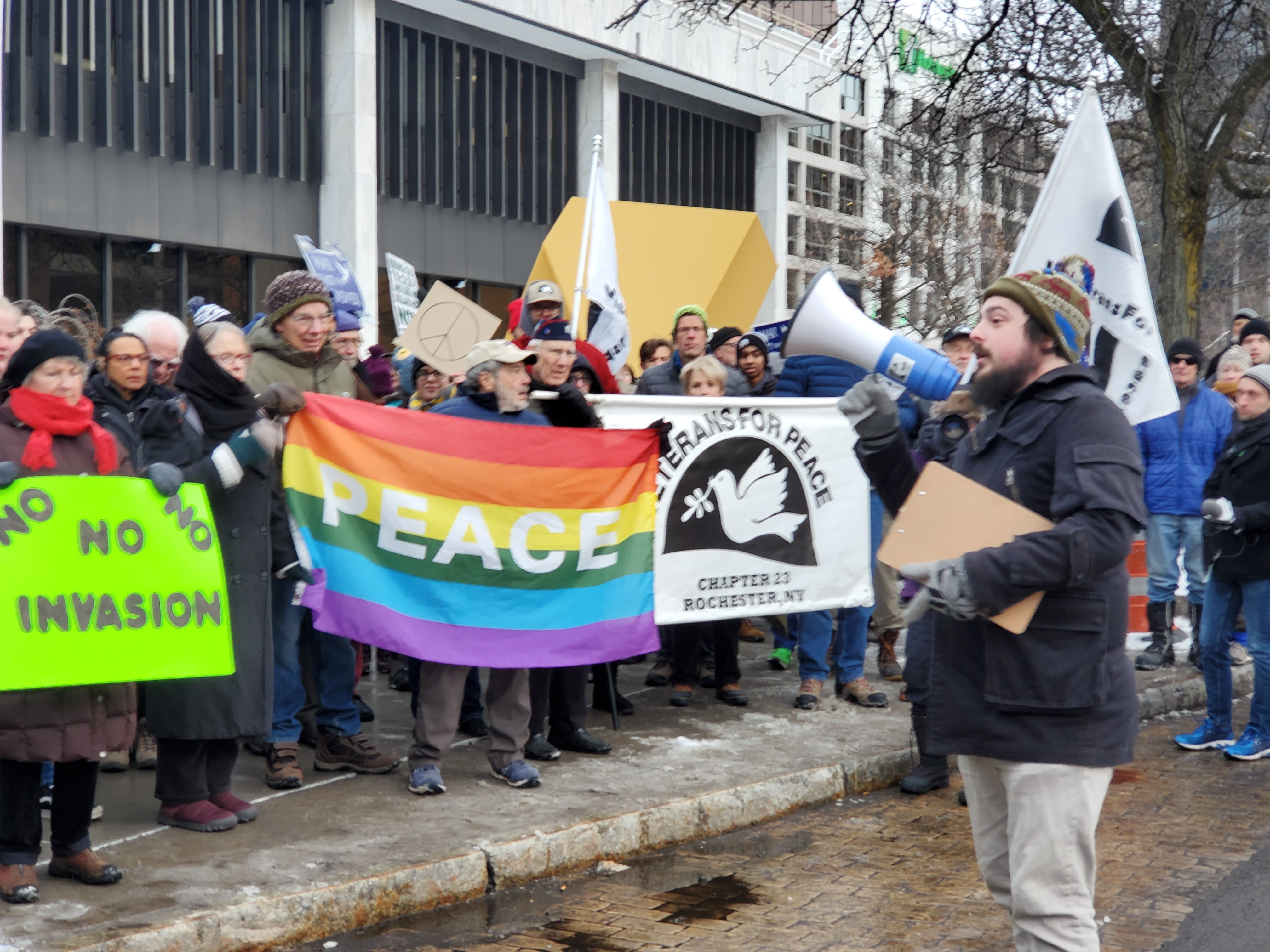 Amid dangerous escalations of military action between the United States and Iran, Metro Justice joined the " Rochester Rally for Peace in the Middle East." Over 100 people in Rochester called for Representative Joe Morelle and Senators Chuck Schumer and Kirsten Gillibrand to support the resolution to block funding for a potential war with Iran. This rally was a part of a national day of action to prevent poor people, working people, and civilians in either the US or Iran from paying the price for the reckless power struggles of political and corporate elites.

Also, one of the speakers at the rally was our elected Secretary, Crescenzo Scipione! He emphasized the necessity of ending wars and ending the oil economy. He advocated for peace with Iran, but emphasized that this peace must also be based on a mutual commitment to a clean, renewable energy economy globally. Check out a clip of his speech here! R.E.D. is a campaign started by Metro Justice to halt the pending climate catastrophe and ensure environmental justice in the long-term. We are striving to build an energy system in which communities -- not corporate investors -- decide what energy we use, where we get it, what we pay, and how that money can be used to benefit our community. The first steps towards this vision is organizing our neighborhoods for community-owned solar and replacing RG&E with a public, not-for-profit utility with an elected board, a green energy mandate, and concrete commitments to a just transition for energy workers.

The R.E.D. committee meets biweekly on Wednesdays from 5:30 - 7:30 PM. In January, we achieved the following significant milestones:

Do you want to join us in halting the climate crisis and making energy a human right? Come out to our March meetings! 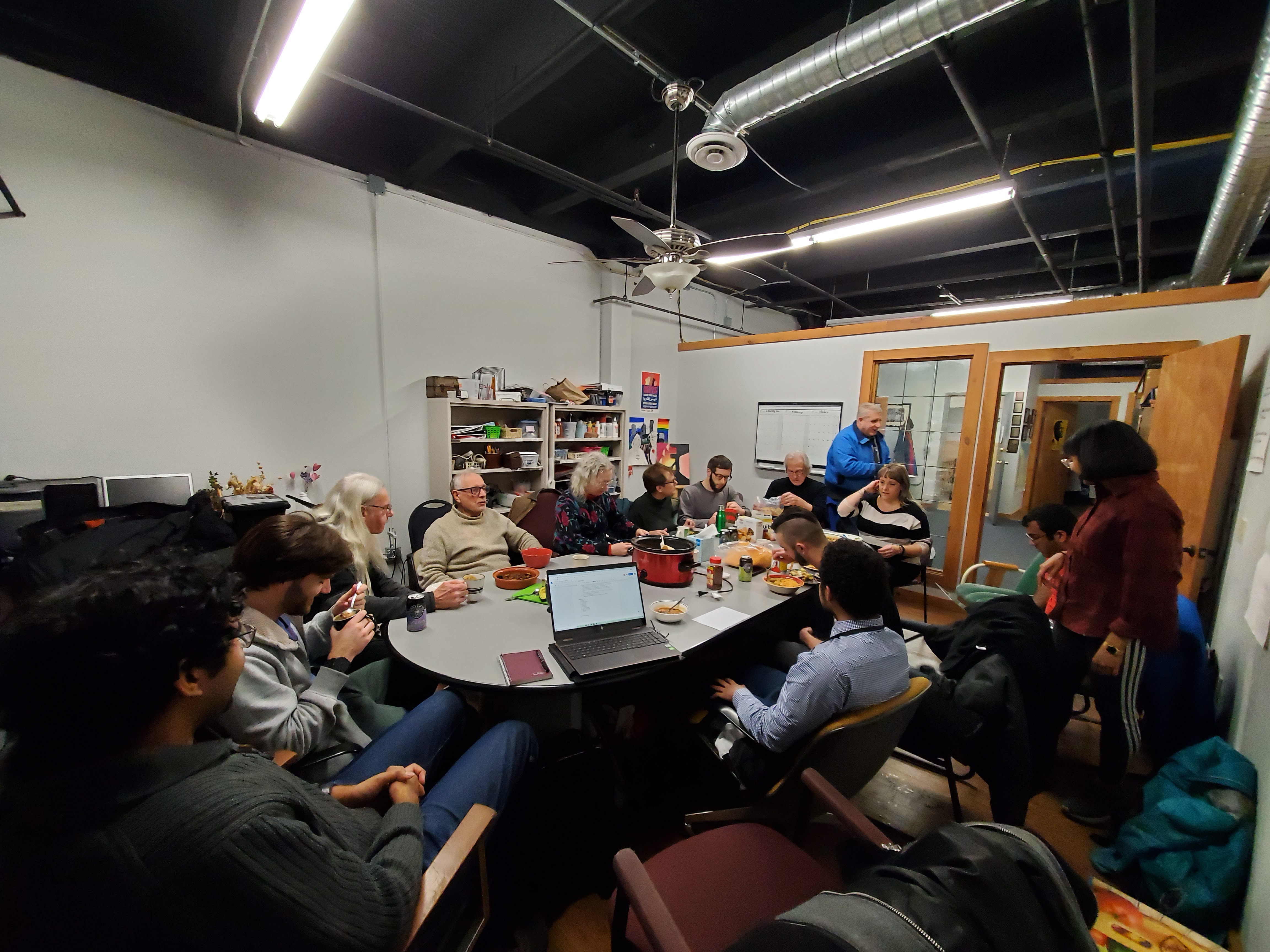 Metro Justice houses the Rochester Chapter of the Campaign for NY Health: a statewide movement for universal healthcare in NYS!

Rochester for NY Health met twice in January. In the first meeting, committee leaders met to chart members' skills and levels of involvement. Leaders then used this chart to form a committee structure that suggested concrete roles for members and formed teams to anchor different arenas of work for the campaign. One exciting development from this meeting is the formation of a follow-up team that will arrange one-on-one meetings with new people interested in getting involved. These one-on-ones will help get new people up to speed on the campaign, answer their questions, get their story on why universal health care is important to them, and guide them through steps on how to get involved. This is the kind of basebuilding that is crucial to organizing long-term grassroots power, so Rochester for NY Health is looking forward to prioritizing follow-up!

The second meeting was the monthly organizing potluck. Rochester for NY Health meets monthly on the last Wednesday of every month from 6 - 8 PM, and every meeting has a community meal. January's meeting recruited members to the follow-up team, organized commitments to attend the Picket the Profiteers in Buffalo action in February, identified high-priority targets and opponents in the health insurance industry, and decided tactics to pressure and/or disrupt our targets to win universal health care. Stay on the look out for bold public actions in March and April!

If you want to join the movement to make health care a human right in NYS, come out to February's organizing potluck this Wednesday, 2/26!

In January, volunteers with RRRN continued to regularly provide rides for immigrant families engaged in legal proceedings, as well as aid undocumented people in applying for drivers' liceses at the Department of Motor Vehicles (DMV). They also planned their first, quarterly general meeting of the year scheduled to occur in February!

Metro Justice is a community organization, driven by our members. Much of this work would not be possible without the contributions of both time and money by the hundreds members who work hard everyday fighting racial, social, and economic justice.

Not a member yet?  Make it official.