Here are some memories of June.

“June arrived to many peace demonstrations and could be counted on as some one always in solidarity with efforts toward justice in Central America. We need people like June and I am very sorry for her loss.”
Marilyn Anderson

“June was always there at our antiwar rallies, with her wry sense of humor, her reliable commitment to the cause of peace, and a refreshing disdain for the powers that be. This is a sad loss for all of us.”
Doug Noble

“June was one of my first friends when I moved to Rochester, a comrade, with whom I went to farm worker meetings once a week. That's where I met her and maintained a loose relationship over the years. She was always present, whatever we were engaged in, despite ongoing medical problems. I'm glad I had the opportunity of having her a part of my life.”
Sylvia Gasoi

“June was a truly committed peace advocate. She protested the US invasion of Vietnam by refusing to pay taxes so the IRS impounded her car. She worked at Kodak at the time.”
Bill McCoy

“I was acquainted with June for years by seeing her at Metro Justice and Central American solidarity events. I did not really get to know her until a group of elders formed the “Band of Rebels” in the spring of 2011. We rallied, on Mondays at noon, in front of banks, the federal building, and other locations. We opposed the financial elites that created the financial crisis and then benefitted most from the bailout. We advocated for the protection of Medicare and Social Security. We described ourselves as grandparents and elders “raising cane” for social justice. June was one of the most regular demonstrators at these event. I came to enjoy having quiet conversations with her in between the chants and picketing. We have lost a number of people who were regulars at these demonstrations. June is our most recent loss. She will be sorely missed.
Jim Bearden

“June was there every week with the Band of Rebels to fight against bank predation. I was lucky to know her and experience her sharp observations and wry sense of humor. We will all miss her.”
Grania Marcus

“Besides being a committed activist for peace and justice, June carried really good vibes.
It was fun to be with her. Thanks June”.
Peter Mitchell

“Whenever I think of the Band of Rebels I think of June. She always showed up. If she was at a demonstration of any sort I knew I was in the right place! And talking with her in the midst of it all was always a pleasure.”
Gail Mott 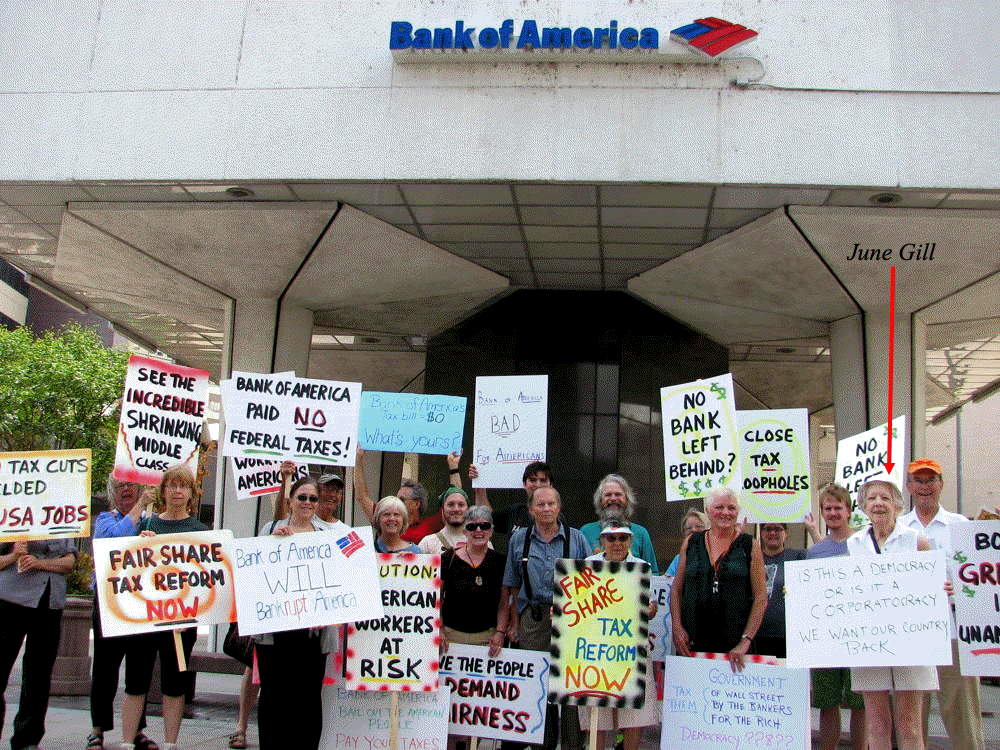