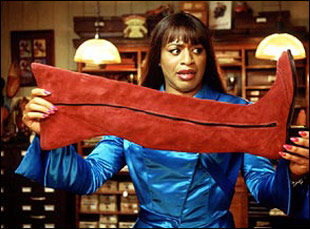 The inspiration for this year’s Tony-winning musical, this film is based on the true story of one British manufacturer to survive. Unable to compete against foreign competition, the maker of sturdy brogues is about to go under when an order from a drag queen redirects the company into a niche market—producing kinky boots. British actor Chiwetel Ejiofor won a fistful of awards for his portrayal of Lola, the female impersonator who consults with the company on boot design and models its products, all the while contending with homophobic factory workers.