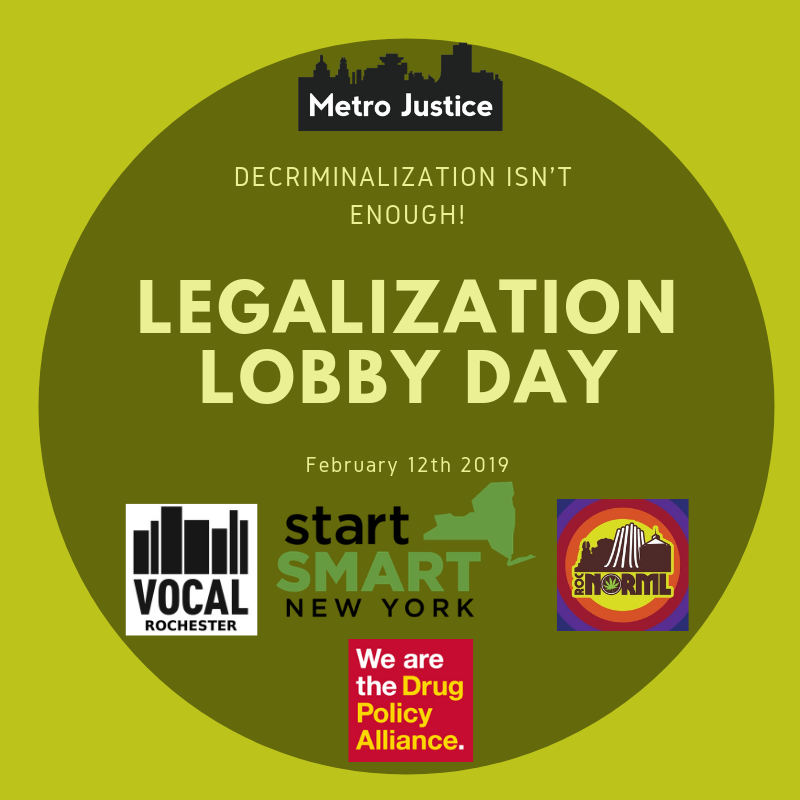 Join Metro Justice and other members of the Start SMART New York Coalition, with the Drug Policy Alliance, including Roc NORML and Rochester VOCAL-NY - Voices Of Community Activists & Leaders, in Albany to demand the decriminalization of marijuana! We will be traveling from Rochester to take action in Albany on Tuesday, February 12th. By fighting for the passage of the MRTA Bill (Marijuana Regulation and Taxation Act), Metro Justice is joining the statewide movement to take a foundational step towards ending the failed War on Drugs and resulting mass incarceration crisis, which has disproportionately targeted and incarcerated our low-income and of color communities. As long as the War on Drugs and the resulting mass incarceration continues, we will have a “justice” system that sacrifices the lives of thousands of citizens so that corporations can profit from full prisons and a virtually free labor force in the prison population.
According to the Drug Policy Alliance, New York has made nearly 800,000 arrests for possession of small amounts of marijuana in the last 20 years, making it the marijuana arrest capital of the world. An average of 60 people are arrested a day for marijuana possession in New York State currently. Furthermore, despite data showing that consumption and sales of marijuana occur at similar rates across racial and ethnic groups, more than 80% of those arrested statewide for a marijuana related charge in 2016 were Black or Latino. Marijuana arrests not only subject people to crippling fines and the abuses we know that occur during incarceration, but these arrests also hinder people’s ability to participate in society by preventing them from obtaining employment, housing, and student loans -- all because New York State criminalizes a plant that even the New York Department of Health says should be legalized and regulated instead.
So, we need you to join us in resisting what Michelle Alexander termed the “New Jim Crow.” Join us in demanding the decriminalization of marijuana, the reinvestment of revenue from a legal recreational marijuana industry into communities that have been harmed by the drug war, the expungement of criminal records for marijuana related charges, and quality jobs in the recreational marijuana industry. Like we experienced with the Fight for $15 and a Union: when we fight, we win!
Transportation will be provided; meet-up time and location have yet to be finalized. Expect to meet up at about 5:45 AM to depart for Albany by 6 AM. Expect to return to Rochester by 7 PM. RSVP below to register and ensure your spot:
WHEN
February 12, 2019 at 5:45am - 7:30pm
WHERE
SEIU 1199
259 Monroe Ave
Rochester, NY 14607
United States
Google map and directions
CONTACT
Mohini Sharma · · 585-397-3534
5 RSVPS