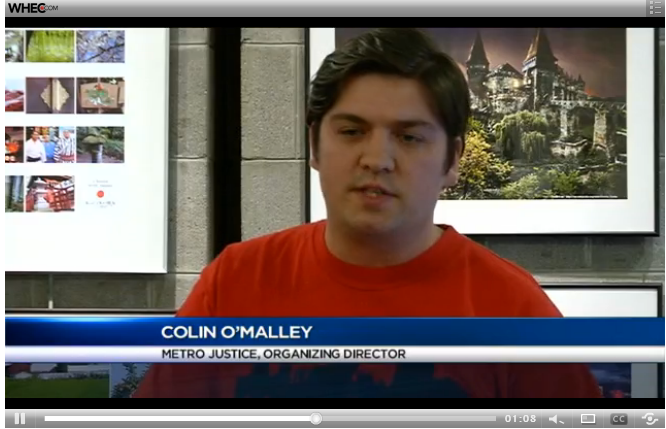 Every year, a portion of state tax dollars goes to support people who work at fast food places. More than $700 million a year in New York. That's for people who are out there working hard. A new study shows it is because the jobs pay too little for families to meet their basic needs.

Even though many people may think most fast food workers are teenagers, the report shows that's not true. Many are parents and the majority are women. Now Congresswoman Louise Slaughter and Senator Ted O'Brien are calling for a change. [more after the jump]

Senator Ted O'Brien, (D) 55th Senate, said, “It's a federal issue, it's a state issue. It's an issue of great importance to all of us who believe that particularly in the fast food industry, we would join the call for supporting workers and communities for higher wages.”

The new study was conducted by an economist at the University of California's Labor Center. It shows the government spends seven billion dollars nationally to help support fast food workers. In New York State, that's more than 100,000 people. Researchers say this is what happens when companies don't pay enough. Employees are forced to rely on Medicaid, food stamps, just so they can provide food, shelter and health care for their families. The study even shows full time workers are unable to get by.

In January, minimum wage in New York will jump to $8 an hour, but researchers say that's not enough.

Colin O'Malley, Metro Justice, said, “For the first few years of my life, my mother worked at McDonalds as our single paycheck in the house. Our experience was, wages that never rose and pubic benefits that slowly deteriorated. It's essential today to start to build an economy based on livable wages, an economy based on a full day's work on  fair day's pay. Right now, we don't have that.”

Senator O'Brien and Congresswoman Slaughter are demanding an investigation into why these companies aren't paying higher wages.

On Thursday, News10NBC's Joangel Concepcion looks into child poverty and what the government is currently doing to help. Are they doing enough? Rochester is seventh in the nation in child poverty.  She'll introduce you to a family that is barely getting by and she will sit down with lawmakers with some very tough questions. This is part of News10NBC's exclusive “New York State Exposed” Series.