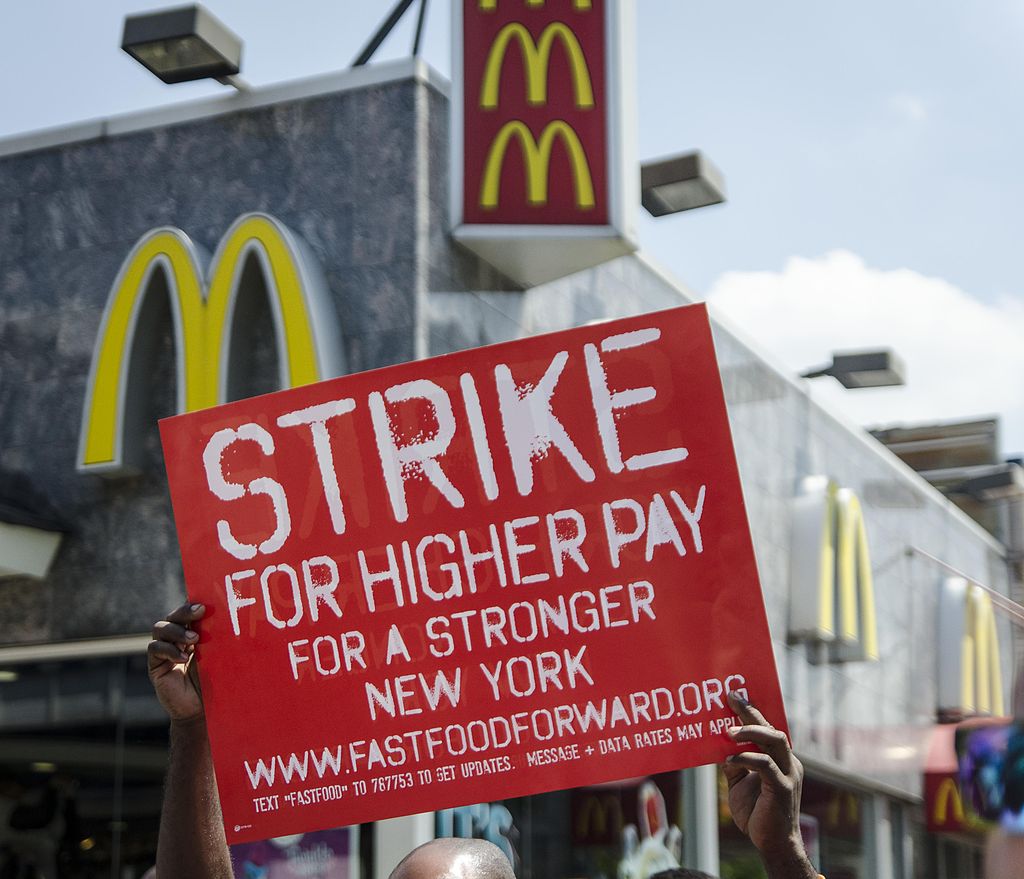 This is wonderful news for low wage workers and their supporters. Even corporate giants like McDonald's and Wal Mart are beginning to have a change of heart on the minimum wage issue after months of clumsy "money saving" tips from said companies. Ralph Nader goes in depth for Counterpunch on how those still unswayed should change their minds. As Nader reminds us, raising the wage won't make the sky fall for corporatists.

Did you know you can do your part right here in Rochester? We've been involved in the Fight for $15, as well as a breadth of other campaigns. If you're not already on our mailing list, sign up and get notified when we're in need of a helping hand!

During a recent talk at Northwestern’s Kellogg School of Management, McDonald’s CEO Don Thompson indicated his support for legislation in Congress to raise the federal minimum wage. “I will tell you we will support legislation that moves forward,” he said. Later in the talk, Mr. Thompson continued, “McDonald’s will be fine. We’ll manage through whatever the additional cost implications are.” It turns out that, contrary to the stale Republican talking points, one of the largest low-wage employers in the country does not have a problem with a higher minimum wage.

We have been vigorously advocating for a raise in the federal minimum wage for several years now. Much progress has been made in that time. Unfortunately, little of this progress has come in the halls of Congress, leaving cities and states across the country to do the work that our national leaders won’t do.

Supporting this action at the state and local level, poll after poll has shown that a vast majority of Americans — 70 to 80 percent — support an increase in the minimum wage. So why hasn’t Congress taken the hint?

Only recently have Democrats gotten serious about the issue and pushed for a vote on legislation in both houses of Congress for a $10.10 per hour minimum wage phased in by 2016. In March in the House of Representatives, Democrats proposed an amendment to a bill which would have raised the federal minimum wage. Republicans in the House voted the measure down unanimously. On April 30, the Senate tried to bring legislation raising the federal minimum wage to a vote. Yet again, Republicans stood in the way and threatened to filibuster, leaving the Democrats short of the 60 votes required to defeat a filibuster.

Republican corporatists’ worn-out and cruel arguments against raising the minimum wage haven’t changed for decades. This despite the fact that the federal minimum wage has been raised numerous times since it was first established in 1938, never being followed by the disastrous consequences and falsehoods peddled by its opponents. Yet, time and again the same opponents roll out their unchanged “sky is falling” predictions and do their best to impersonate Chicken Little.

As if it weren’t enough that some of the Republican Party’s leaders were breaking with the party on this issue, now their loudest talking point is being undermined by the very people the Republican Party pretends to speak for in its opposition to raising the minimum wage: businesses and large corporations. McDonald’s CEO’s support for a higher federal minimum wage was just the latest development in what has become a steady stream of acceptance from some of the nation’s largest low-wage employers who are reading the tea leaves.

In February, Gap Inc. announced that it would raise the minimum pay for its workers to $10 per hour by next year, which would raise the pay of 65,000 of its 90,000 American employees.

In May, following the Republicans’ filibuster, Walmart and Subway indicated that they do not oppose an increase to the minimum wage. Subway’s CEO, Fred Deluca, indicated that he was “not concerned” by the prospect of an increased minimum wage and that he believed it “won’t have a negative impact.” And it was reported in the Wall Street Journal that Walmart finally has said that while a minimum wage increase would increase their labor costs, they also believe it could increase their sales (presumably by putting more money into the economy and in particular into low-wage workers’ pockets, who compose a large portion of Walmart’s customers). Also in May, Panera Bread’s CEO, Ron Shaich, indicated his support for raising the federal minimum wage. Costco already starts its workers at $11.50 per hour plus benefits.

The low wages that many of these large, profitable corporations provide doesn’t only harm low-wage workers, but they also harm all taxpayers. By paying their employees such low wages, corporations end up employing workers who can’t afford to buy food, pay the rent, or get the health care that they need. As a result, these employees end up having little choice but to turn to taxpayer-funded government safety nets for things like food stamps, Medicaid, the earned income tax credit, and housing-assistance programs. In this perversion of capitalism, taxpayers end up footing the bill for and subsidizing these large corporations’ low wages, while their CEOs make up to $12,000 per hour!

The House Education and Workforce Committee released a report last year which showed that for every Walmart Supercenter, the cost to taxpayers was between $900,000 and $1.75 million. One would think that for Republicans who generally decry government intervention, they would recognize this fact and end this thinly veiled corporate subsidy. And now, even many of these corporations are not resisting. Republicans should follow their lead.

Republican corporatists are fighting what has long been a losing battle. They should stop standing in the way of a raise for 30 million hardworking Americans who are making less today, adjusted for inflation, than they did 46 years ago. The political opponents of Republicans who don’t embrace the idea that it is “time for a raise” — whether they are Democrat, Independent, or a Republican primary challenger — should use these Republicans’ opposition to this policy against them. If Republicans want to play a game of Chicken (Little), then let them – to their own defeat!