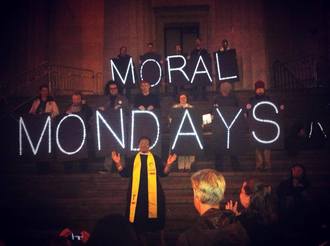 Clergy, faith leaders, congregants and allies will gather for a prayer vigil to prioritize justice and compassion for New York's poor and working people over tax breaks for the wealthy.

Join us as we join with communities of faith to call upon Assembly Majority Leader Joe Morelle to do the right thing and fight for a fair New York State budget that works for all of us!

Moral Mondays call attention back to the most basic moral objectives of budgeting and tax policy. A moral budget values every member of society, prioritizes the common good, and lifts the burdens of poverty. A moral tax system raises enough to pay for basic needs like education, social safety net, and infrastructure development and calls on each member of society to contribute a fair share.

The Executive Budget includes $2 billion in new tax cuts, disproportionately favoring the wealthy and big corporations. These breaks will result in devastating cuts to public services, including schools, government services, and the social safety net.

Can't make it? Come with us to Albany next Thursday to send our message directly to Governor Cuomo!