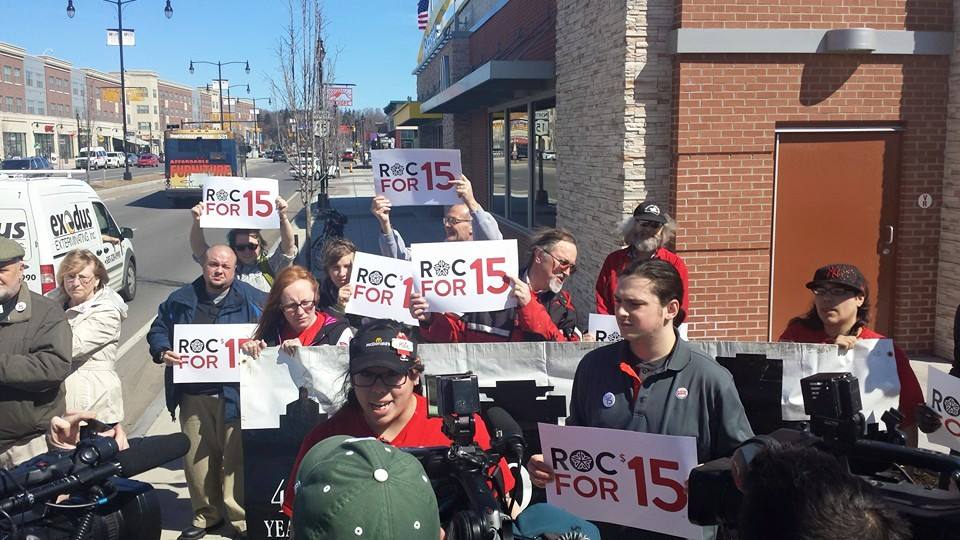 Big companies pushing for social change? It sounds too good to be true! Actually, it is. For many companies raising wages or standing against proposed discriminatory laws are just PR moves.

The real root of these miniscule changes are social movements pressuring for these changes. The louder these movements are, the more companies fear a loss in profit due to loss in customers via vocal or silent boycott. Standing for LGBT rights, or wage movements is a way to appease their consumer base. While this may work for some, not all of us are even close to appeased and demand companies do better. Most recently, we held protests a week ago telling McDonald's that the $1 an hour raise for a small number of employees is not enough, they can do better!

Robert Kuttner's article "Our Corporate Saviors", published on both The Progressive and Huffington Post reminds us that social movements are the real drivers of change. If we are to thank anyone for the changes corporations make, it should be those active in social movements. In fact, we invite you to be an active participant.

Come join us on April 15th for the upcoming Fight for 15 rally. We'll be meeting at the U of R in the Eastman Quad at 5 to demand $15 an hour minimum wage and unionization for fast food workers. The more we push, the more we can make change!

What are we to make of the fact that some big corporations are turning out to be the relative good guys, on issues as varied as same-sex marriage, the environment and even (to a limited extent) workers' wages? Last week, the governors of Indiana and Arkansas were forced to back down and dilute bogus "religious freedom" laws intended to shelter discrimination against gays and lesbians, in large part because their corporate bigwigs told them to stop embarrassing the state and scaring off business.

In Indiana, these included the pharmaceutical giant Eli Lilly, the Indiana Pacers, and even the Indy 500. In Arkansas, the pressure came from, among others, (shudder) Walmart, whose executives urged the hapless governor, Asa Hutchinson, to veto the bill.

Meanwhile, Walmart has been insisting that its suppliers meet green energy standards, and McDonald's new CEO took out full-page ads announcing that its owned and operated franchises (about one in ten retail McDonald's) will pay a buck over the local minimum wage, as well as offer paid vacation and sick leave. Walmart has also announced some (meager) wage hikes.

What gives here? Are big corporations the new custodians of social conscience?

Hardly. If you take these one at a time, a few things are at work. For starters, most big corporate executives are more cosmopolitan than the religious far right, and they also worry mightily about reputational damage.

And something similar has happened in with regard to  corporate leaders' assessment the reputational risk in the case of discrimination against our LGBT sisters and brothers. If you go a step further and ask the source of the corporate change of heart, it's not that corporations were in the forefront of this cause. Rather, gays and lesbians built a movement.

The movement, and its effect on public opinion, came first. A majority of Americans now support same-sex marriage. Once public sentiment had shifted against discrimination, the corporate elite followed.

Courts helped in a few cases, beginning with Massachusetts in 2003, where the state Supreme Judicial Court first legalized same sex-marriage. But mostly, courts followed rather than led public opinion. If the Supreme Court ducks this issue, and declines to overturn state laws allowing same-sex marriage, it will be mainly because the Court doesn't dare put the credibility of the institution at odds with rapidly changing public sentiment.

But the movement came first.

To be sure, it's terrific that corporate leaders do not want to get in front of this freight train. Their role further marginalizes the religious right, and amplifies the tacit splits in the Republican Party. (Good luck, Jeb Bush.)

And if you compare the rollback of the fake religious alibi for discrimination with, say, the McDonald's Corporation's token action on wages, you can see just what difference a movement makes. LGBT activism has produced massive change. Labor activism is making a modest comeback from a full-scale assault by organized business.

Labor unions and other local organizers have been making a stink about the dismal wages paid fast food and other retail workers. Lower unemployment rates also make it harder to get good employees to work for a pittance. So outfits like McDonald's decide to make a virtue of necessity and pat themselves on the back for paying a bit more.

They hope that these gestures will take some of the wind out of organizing drives. But moves like these should teach the opposite lesson—namely, that pressure works.

The labor movement, however, has been pummeled for more than three decades, ever since Ronald Reagan made a big symbolic deal in 1981 of firing striking air traffic controllers. A stronger workers' movement, not just of minimum-wage workers but of all wage and salary workers, would compel corporations to offer a lot more than an additional dollar an hour.

By the same token, the strength of the environmental movement produces a nice rendezvous with Walmart's cynical desire to change the subject to anything but wages. So Walmart becomes a champion of green supply chains. Once again, the movement came first.

Yes, there are a handful of corporations whose founders are genuine progressives, outfits like Ben & Jerry's or The Body Shop. But for the most part, corporations sometimes pursue decent policies not because CEOs are progressive but because they are responding to pressure—either the direct pressure of campaigns for better wages or LGBT rights or the indirect pressure of changing public opinion. But someone had to go to the trouble of organizing such pressure.

There is one other paradox here. Despite the presence of the occasional corporation using its influence for the social good, for the most part the record of corporate America as a whole is a disgrace. Look at any legislative effort to improve the environment, or wages and working conditions, or to secure rights, and you find organized corporate power on the other side.

If America has become the sort of society where regular people are insecure and the Tea Party rebellion is one of the reactions, the corporate domination of our democracy is one of the major causes. So the corporate big shots get to win both ways. They dominate the process of rule-setting that leads to a very frustrated 99 percent—and once in a while a few of them get to play the role of enlightened, endearing moderate.

Can anything change this cynical pattern for the better? Well, yes. It takes a movement.