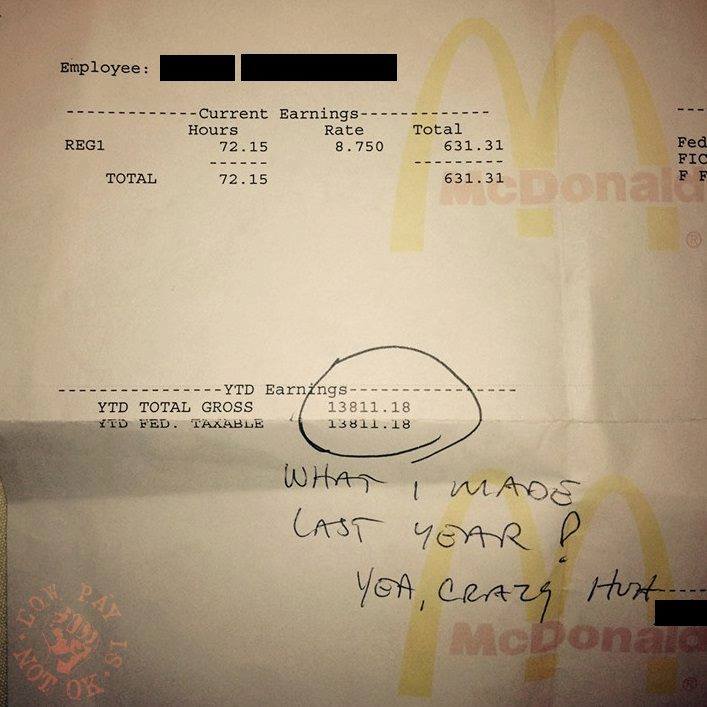 If we need another reminder after yesterday's rally as to why raising the wage matters, here it is. Common jokes regarding people on pubic assistance are "your tax dollars at work!" or "work harder, millions on welfare depend on you!". It's true, a portion of our tax dollars do go to supporting people on public assistance. It's also true that many people on public assistance are working, and those who are not are unable to work due to reasons that limit their personal capability, like health. Mind you in the grand scheme, 153 billion is a drop in the bucket compared to the amount of tax money going to our military, or the real welfare cheats, mega corporations.

An easy way to get millions off public assistance would be to hold big companies accountable for cuts in pay and benefits. Lauren McCauley's article for Common Dreams gives a breakdown on the recent report The High Public Cost of Low Wages, which examines just how many people at work rely on public assistance to cover what their paycheck won't.

It's important that we keep fighting for the rights of minimum wage workers. As seen with last week's article, the more we push, the more progress moves forward. This is why Fight for 15 is a strong movement. Did you attend yesterday's rally? What are your thoughts?

In fact, U.S. taxpayers pay roughly $153 billion each year to supplement employers who refuse to pay a livable wage, according to report published Monday by the University of California, Berkeley, Center for Labor.

(More after the flip!)

According to the report, The High Public Cost of Low Wages (pdf), 73 percent of those enrolled in the country's major public support programs are members of working families. The Berkeley study examined state spending for Medicaid/Children’s Health Insurance Program and Temporary Aid to Needy Families (TANF), and federal spending for those programs as well as food stamps (SNAP) and the Earned Income Tax Credit (EITC).

Despite a rebounding economy, U.S. workers are not being compensated. According to the research, when adjusted for inflation, wage growth from 2003 to 2013 was either flat or negative for the entire bottom 70 percent of the wage distribution. Further, the number of non-elderly Americans who receive insurance benefits from an employer has fallen from 67 percent in 2003 to 58.4 percent in 2013.

"When companies pay too little for workers to provide for their families, workers rely on public assistance programs to meet their basic needs," said report co-author Ken Jacobs, chair of the Labor Center. "This creates significant cost to the states."

According to the Berkeley study, the reliance on public assistance spans a diverse range of occupations, including fast-food workers (52%), childcare workers (46%), home care workers (48%), and even part-time college faculty (25%).

In total, more than half of all state and federal spending on public assistance program now goes to working families, the study finds.

The report comes amid a growing push to increase the federal minimum wage. On Wednesday, workers in hundreds of cities across the country are holding an international day of action to call for a $15 minimum wage and the right to form a union without retaliation.

And the Berkeley researchers contend, raising wages "would lift working families out of poverty and allow all levels of government to better target how our tax dollars are used."