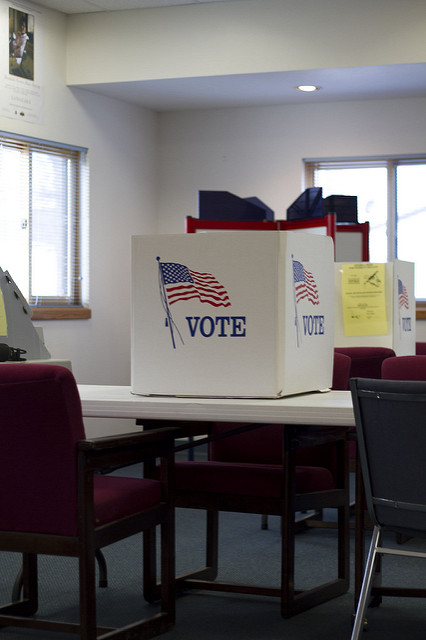 American voters are not happy with this election year. The majority of Democrats and Republicans aren't happy with their party front runners. The GOP has been wondering what to do with Trump, who some would believe is an upfront version of Republican values. Meanwhile Democrats are facing an implosion of their party between party and superdelegate preference for Hillary, while voters have shown strong support for Sanders. This has especially been noted in the Arizona and New York primaries, and the Nevada Caucus.

Lauren McCauley's article for Common Dreams offers a breakdown of a recent survey, stating that 90% of voters feel disenchanted with our current election system. Voter fraud comes up every Presidential election. Not so much from voters themselves, as from rigged voting machines that have switched or refused to count ballots for certain candidates. Democrats are getting fed up with the superdelegate system, one where those chosen have already pledged themselves to a candidate before primaries. There's also the matter of the Electoral College, which has been contested for the past number of elections.

While the President is one of the many roles in government, taking up one of the three branches. It's also the role that plays figurehead for our country as a whole, and how other countries perceive us. The President is the one who determines which direction to steer the country in. Unfortunately for voters, many feel helpless in a system stacked in favor of the interests of the few. Many don't feel adequately represented, and it's time for things to change. Do you think the two party system is antiquated and rigged? Would a third party growing in prominence help? Would open primaries be a solution?

This year's presidential primary has left many voters feeling helpless and alienated from their political parties, according to a new poll, which found that Democrats and Republicans alike want to see major changes in the way presidential candidates are chosen.

The survey, conducted by the Associated Press-NORC Center for Public Affairs Research and published Tuesday, reported that a full 90 percent of voters lack confidence in the country's political system while 40 percent went so far as to say that the two-party structure is "seriously broken."

Seventy percent of voters, including equal proportions of Democrats and Republicans, said they feel frustrated about the 2016 presidential election and 55 percent reported feeling "helpless."

The survey, which was conducted May 12-15, comes as voters on both sides of the aisle have expressed historic dislike for the two leading candidates, GOP nominee Donald Trumpand Democratic frontrunner Hillary Clinton.

The issue of superdelegates—elected officials and Democratic elites—has gotten a lot of attention this year because of the overwhelming number that, even before the primaries began, backed party favorite Clinton over challenger Bernie Sanders. According to AP's numbers, Clinton has won just 274 more pledged delegates than Sanders, but boasts having the support of 525 superdelegates to his 39.

According to the survey, 53 percent of voters say that the Democrats' use of superdelegates is a "bad idea" while just 17 percent support the system.

Moreover, 70 percent of voters said they prefer that primaries and caucuses would be open to all voters, rather than "closed" to all but registered party members.

"It's kind of like a rigged election," Nayef Jaber, a 66-year-old Sanders supporter from San Rafael, California, told AP. "It's supposed to be one man one vote. This is the way it should be."

Most Americans believe that neither political party represents the views of ordinary voters. Just 14 percent say the Democratic Party is responsive to the opinions of the average voter while 8 percent say the same about the Republicans.

Similarly, voters said that neither party is receptive to fresh perspectives. "Only 17 percent of the public say the Democratic Party is open to new ideas about dealing with the country's problems; 10 percent say that about the Republican Party," the survey reports.

And despite arguments that Sanders' refusal to step down has hurt Clinton's chances in the general election, 64 percent of Democrats say his bid for the nomination has been good for the party, along with 43 percent of Republicans.

Overall, the survey found that while the 2016 election has captured the public's interest, "only 37 percent are feeling hopeful about the campaign, 23 percent are excited, and just 13 percent say the presidential election make them feel proud."