Save Your Sympathy. You Are the Problem 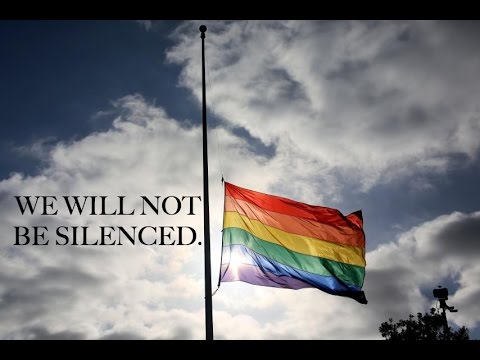 It was difficult finding an article related to what happened in Orlando, for a few reasons, a major one being that last week, when posting would have been on schedule, things still felt too raw. To focus on another topic didn't seem justifiable. Now there's a plethora of articles and think pieces about Orlando, and more coming out every day. To be honest, this is attempt number two at a blog post, I was working with another article until I came across this one.

C.J. Prince's article for The Huffington Post fortunately takes us to the heart of the matter, LGBT violence and its intersection with race and the systematic bigotry of our political system. Yes there's a wealth of issues related and unrelated that are buzzing around, but it boils down to good old "Thoughts and prayers", and how they're a load of BS. Many of the legislators who offered up their thoughts and prayers are the same ones who have pushed for anti-trans "bathroom bills", and took similar stands on other LGBT issues.

You can't simultaneously stand with and vilify a community. If you do, your thoughts and prayers are empty gestures in hopes of positive PR. If you legislate against LGBT people, or people of color you're unconsciously advocating for violence against them. You are saying they're second-class citizens and therefore can be treated in a subhuman manner by anyone who feels uncomfortable or hateful. Thoughts and prayers are simply a hollow statement if you're trying to give them to a group you fear and hate.

One way to break away of a culture of Thoughts and Prayers is to hold our legislators accountable. Vote out people who think and pray while voting against human rights. Call out politicians when they're turning tragedy into a PR campaign. Tell these people that we're not taking it anymore.

In the aftermath of the Orlando massacre, Utah Lieutenant Governor Spencer Cox attended a vigil for the victims and gave a speech, which soon went viral, in which he apologized for his past homophobic behavior and thanked the LGBTQ community for being patient with him while he evolved. He later said in an interview with MSNBC’s Andrea Mitchell:

“I think it’s pretty sad that a speech by a Lieutenant Governor in Utah is getting this much attention just by saying we should love each other. How low is the bar in our country?”

On that much we can all agree. But will Cox now find the courage to speak out against his own administration’s lawsuit over Obama’s directive to states to allow transgender people to use the restroom that matches their gender identity? Will he explain to Gov. Herbert that the “bathroom bill” in North Carolina demonizes and discriminates against trans people and puts them at risk for violence from cisgender transphobic people who want to harm them? Will he recognize that discriminatory policies demonizing the LGBTQ community are what led to the atrocity in Orlando that took 49 lives and injured dozens more?

Because, here’s the thing. We’ve seen a lot of statements and sympathy tweets from lawmakers offering their “thoughts and prayers” to the families of the victims. But most ignore the fact that the shooting was a hate crime against the LGBTQ community. Instead, they use it as an excuse for more xenophobia, more violence, more hatred.

The massacre in Orlando wasn’t an ISIS attack. It wasn’t a “radical Islamic terrorist” attack on the American way of life. It was a targeted hate crime against largely black and Latinx LGBTQ people by a violent, mentally unstable American man from Queens with a history of domestic abuse and an assault weapon he should never have been able to purchase.

Indeed, there is now some strong evidence to support that the shooter was, in addition to being a mentally unbalanced wife-beater, a closeted gay man who took out a lifetime of self-loathing on a club full of innocents.

The thing we need to get straight is that when politicians fail to support equality and instead pass discriminatory legislation or when they refuse to speak out against that discrimination, they are helping to foster the climate in which LGBTQ people are feared, scorned, hated and, ultimately, targeted. And then, when we are tragically reaping what they’ve sown, they offer their empty thoughts and prayers like so many crocodile tears.

You cannot, as Rep. Trent Franks did, call marriage equality a threat to the nation’s survival and then tweet that your “thoughts and prayers are with all the victims, their families, and first responders in the #Orlando attack.”

You cannot, as Sen. Ted Cruz did, call LGBTQ rights leaders “jihadists” out to destroy the Christian way of life, and then tweet this: “Our hearts go out to those killed and wounded last night. Our prayers are with their families, and with all their grieving loved ones.”

You cannot, as Sen. Rand Paul did, compare same-sex marriage to bestiality and then tweet that your “thoughts and prayers are with the victims and their families.”

You cannot, as Gov. Mike Huckabee did, deny the existence of racism in this country and call marriage equality proponents nazis and then ask people to join you “in praying for the victims of the Orlando attack and their families.”

You cannot, as Congressman Steve Russell did, personally sponsor the billallowing federal contractors to discrimination against LGBTQ people and then tweet this: “There is simply no civilized explanation for the horrific terror act in Orlando, Florida.”

You cannot, as Michelle Bachmann did, post a photo of the Orlando skyline with the hashtag “#PrayForOrlando” after you’ve called for Christians to engage in “spiritual warfare” to combat same-sex marriage and compared LGBTQ people to Satan.

You cannot, as Gov. Phil Bryant of Mississippi did, sign a law that allows businesses to refuse service to LGBTQ people and then ask everyone to join you in “praying for God’s peace and comfort for those affected by the horrific act of terror in Orlando.

You cannot as Gov. Pat McCrory of North Carolina did, sign into law the “bathroom bill,” criminalizing transgender individuals who use restrooms corresponding with their gender identity, and then tweet this: “Orlando shooting was a tragedy & should never take place in our country. Those who died were innocent victims of an inexcusable act.”

You cannot, as Gov. Gary Herbert of Utah did, support that discriminatory “bathroom bill” by suing for the right to discriminate against trans people and then issue a statement saying “our hearts are broken” and “we all stand united in support of our brothers and sisters in Orlando.”

No more broken hearts. No more prayers for peace and comfort. No more pseudo-solidarity.

If you do not advocate for full equality for LGBTQ people, you are the problem.

“But wait,” you say, “I never advocated for murder or violence. I would never, ever support that.”

Dear weeping politicians, it is long past time for you to connect these dots. You cannot, in one moment, marginalize, demonize and cast as “other” a particular group, and then in the next moment, lament the fact that that group is being targeted for a hate crime. If you advocate for inequality—whether because of your religious beliefs, your cultural beliefs, your political aspirations, etc.—you are helping to create a culture that made LGBTQ people an easy mark for a lunatic homophobe with an assault weapon, regardless of whether his homophobia was internalized or externalized.

By failing to speak up against discrimination and hate, you have made the world unsafe for LGBTQ people, fueling their own self-loathing and inciting homophobic rage in others. You are the reason hate crimes against LGBTQ people were up in 2015, and particularly against people of color, transgender people and those who are gender-nonconforming. You are the reason LGBTQ teens are the daily targetsof harassment, bullying and violence in schools. And you are the reason they too often choose suicide over the pain of living as a human target.

Then start voting for equal rights for LGBTQ people.

Ask your supporters to respect all people equally, regardless of sexual orientation or gender identity.

If you really want to make sure this doesn’t happen again, you must finally recognize the link between a cultural climate that demonizes LGBTQ people and the attacks against them that inevitably follow.

If you can’t do that, please, have some respect for the fallen and say nothing at all.