After nearly a decade of war in Syria, the heroes who defeated ISIS face the threat of annihilation. The Democratic Federation of Northern Syria and their Syrian Democratic Forces are building a stable, secular democracy in the midst of the war. Yet neighboring Turkey is trying to destroy Northern Syria.

Since the Syrian war began in 2011, Turkey has cooperated closely with the Salafi jihadist Ahrar al-Sham, whose leaders were al-Qaeda members in Afghanistan. Turkey lent support to jihadists from al-Qaeda’s Syrian affiliate, Jabhat Fatah al-Sham (formerly al-Nusra). Turkish President Erdoğan allowed foreign fighters through his borders to join ISIS in Syria, who were often found with Turkish passports and clear material support from Turkey.

Until the Turkish invasion, Afrin had been a safe haven for millions internally displaced Syrians. Now, Erdoğan is using the same jihadist groups to wage a war on Afrin that could end the same as the massacre in Şingal, where ISIS murdered, enslaved, and raped the Yazidi people. Erdoğan has already committed numerous war crimes and human rights violations, including killing civilians in indiscriminate attacks, ethnic displacement, and destruction of Afrin’s crops. 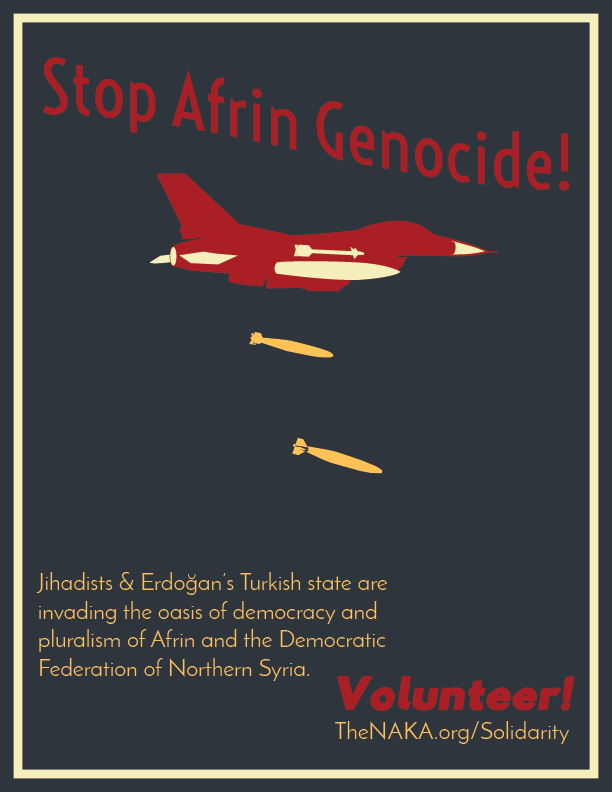 The United States Congress must:

1) Immediately condemn the Turkish invasion and occupation of Afrin,

2) Sanction Turkey pending withdrawal from Afrin and cessation of hostilities against the Democratic Federation of Northern Syria,

3) Immediately halt all US arms sales to Turkey.

For more information about the campaign, visit the North American Kurdish Alliance. If you’re in Rochester, follow Rochester Friends of Rojava - Northern Syria on facebook.