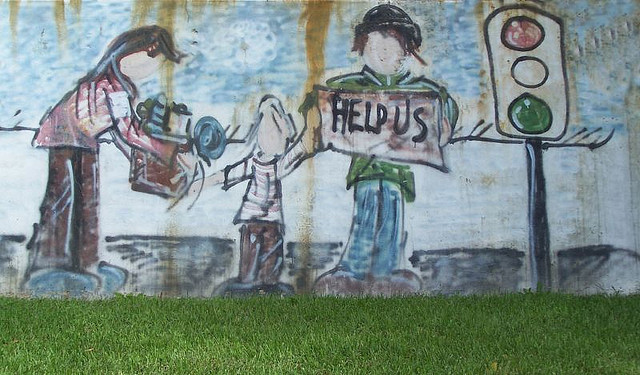 Just as the headline says, more children than ever are homeless. Children are our most vulnerable population, because they're the population most prone to the whims of society. The accountability politics of the far right act in a manner that says they're to atone for the mistakes of their parents (unemployment, underemployment, "laziness" "moral irresponsibility"). Children are vulnerable to the abuse of adults, despite laws to protect their safety. Children are also vulnerable to poor health from dire circumstances because they are still physically and psychologically developing.

Jon Queally's Common Dreams breakdown of the latest report goes in depth with the statistics and detriments of a high rate of child homelessness. The average numbers are sobering when compared to previous reports. In 2006 only 1 in 50 children annually faced homelessness. The report states we went up to 1 in 30 in 2013 with no sign of that statistic improving. One in thirty children at some point in 2013 either spent time in a shelter or on the street.  Other factors were taken into account including geography, race, policy, and domestic violence.

Most saddening of all is the impact that homelessness has on childrens' health. Children are more like to fall physically ill when homeless, and more likely to develop mental illness from the stress. The mental health part is important, as that will affect the rest of that child's life. Now think about that in our own community, eleventh highest in the nation, where homelessness is being addressed by various shelters (unfortunately few serve families and many are sex segregated), nonprofits, fundraisers, and advocacy groups.  We even have had our own Tent City since the Civic Center Garage closed its doors to the homeless. Right now they are in need of tents and blankets.

We need to do something to not just put a roof over people's heads, we need long term solutions. We need more family-welcoming shelters for the immediate, and we need to push for affordable housing and sustainable employment. Metro Justice has already committed to fighting for a $15 minimum wage, which will lift numerous families out of poverty. How will you help the homeless? Share your ideas in the comments.

The annual levels of homelessness among children have never been higher in the United States, according to a new comprehensive report released on Monday.

Prepared by the National Center on Family Homelessness, the report—America’s Youngest Outcasts (pdf)—shows that with poverty and inequality soaring in recent years, approximately 2.5 million children in 2013 found themselves without a roof over their head or place to call home. That number equals one in 30 American children nationally, and constitutes an 8 percent increase over the previous year.

"Child homelessness has reached epidemic proportions in America," said Dr. Carmela DeCandia, director of the NCFH, in a statement. "Children are homeless to night in every city, county and state — in every part of our nation.”

Based on federal and other available data and broken down by state, the analysis shows that homelessness among children varies widely depending on geography. The report includes an index ranking based on four basic criteria: 1) the extent of child homelessness (adjusted for population); 2) general well-being of the children; 3) risk for family homelessness; and 4) state policies designed to combat the problem. Ranked from 1-50, the states with the best scores were Minnesota, Nebraska and Massachusetts. The worst states for homeless children were Alabama, Mississippi and California.

The report cites the major drivers behind the crisis, which include: 1) the nation’s high poverty rate; 2) a lack of affordable housing across the nation; 3) the continuing impacts of the Great Recession; 4) racial disparities; 5) the challenges of single parenting; and 6) the ways in which traumatic experiences, especially domestic violence, precede and prolong homelessness for families.

According to a fact sheet (pdf)released alongside the study:

Research shows that homeless children are hungry and sick more often. They wonder if they will have a roof over their heads at night and what will happen to their families. Many homeless children struggle in school, missing days, repeating grades, and drop out entirely. Up to 25% of homeless pre-school children have mental health problems requiring clinical evaluation; this increases to 40% among homeless school-age children.

The impacts of homelessness on the children, especially young children, may lead to changes in brain architecture that can interfere with learning, emotional self-regulation, cognitive skills, and social relationships. The unrelenting stress experienced by the parents may contribute to residential instability, unemployment, ineffective parenting, and poor health.

Dr. DeCandia notes that federal policies seeking to address the problem of homelessness among veterans and other chronically vulnerable adults have showed that improvements can be made, but says specific federal action to fight child homelessness has not been adequate to address the growing national crisis of homeless youth.

“Living in shelters, neighbors’ basements, cars, campgrounds, and worse — homeless children are the most invisible and neglected individuals in our society,” she said. “Without decisive action now, the federal goal of ending child homelessness by 2020 will soon be out of reach.”

If the situation does not change soon, she said, the society is "going to pay a high price, in human and economic terms."